Wondercon at the Anaheim convention center was do much fun, now to show you guys what i came home with! ( Collapse )

I am looking for the base/stand for the Black/White Reshiram 3 inch PVC Mini Figure. Love the figure but I'm having too many problems try to keep him steady in between a couple other pieces. xD
It's really the only thing I need, but if you have a minimum purchase you want fulfilled before shipping, please let me know! I'm interested in most figures/some flats if that is the case. Thanks in advance!

Hello guys! This is just a friendly reminder that my auction for the 2007 Japanese Takara TOMY Talking Darkrai Plush ends in a little over ten hours! Don't let this one pass you up! There are only a few bids on it :)

Sales Permission was granted on 11/28/2010 by Denkimouse
Link to my feedback is HERE: http://feedback.pkmncollectors.net/feedback/view/eevee_evs_lover/ 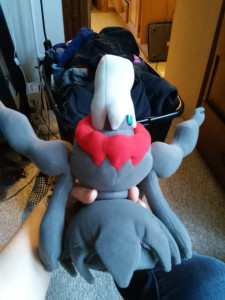 Salutations to all my new friends on pkmncollectors! My name is Princess Lala Hakuryu, or, Lala for short! However, Haku works just fine here since its part of my username! ^-^ Well... I decided to go by PrincessHakuryu since there is already a Princess Lala on livejournal and Dragonair (japanese name Hakuryu) happens to be my 1# favorite pokemon. Anyways, as you have already guessed, I love Pokemon and I am very pleased to finally become a member here on this particular livejournal community! I am also an active member on MLPArena and Pokebeach so some have of you may have seen me around! ;)

I have been a fan of Pokemon since it very first came out to the United States in 1998-99' and I still keep up-to-date! I collected pokemon toys, cards, and other merchandise and would like to continue my collections! I would love to gain more Dratini-line and Eeveelution merchandise. I take interest in marine water types, reptile-like pokemon, and eeveelutions because my favorite animals in real life are seahorses, snakes, and foxes. My top favorite Pokemon include: Dratini line, Eevee line, Kingdra, Milotic, Magikarp, Lugia, and Togekiss. It's honestly very difficult for me to pick only a few favorite pokemon as I enjoy almost all the pokemon!

More about me- Im a current resident in Texas, formerly living from Lakeland, Florida where I would go to Disney World and the ocean with my family. I also used to live in Indiana and Minnesota! My ultimate dream in life is to have a nice house close to the ocean with rooms full of my toy collections and become a veternarian technician specializing in herpetology (reptiles) and sea life. I own a bearded dragon and kenyan sand boa as pets! I am 23 and married but we having the wedding later on in 2020. My husband is also a HUGE fan of Pokemon and we often play Pokemon Shuffle together at home. His favorite Pokemon are Charizard, Ninetails, Growlithe, Luxray, and Scyther. I also have a Disney doll and large G4 My Little Pony collection.

Lets get down to my Pokemon collection! Im sure it isnt as big as some of the collections most people might post here, but by joining here I hope to expand my collection big time and make it grow! Its my lifetime dream to complete the original 151 japanese auldey/TOMY Monster Collection MOC. I love figures of all sorts, trading cards, and pokemon plushies- either legit or really well bootlegged versions. Here is my collection in the break below, it is a mixture of new and old stuff!

Enjoy and thank you so much for taking your time to read and view my pictures! I look forward to making new friends here and posting many new brag pictures! ^-^

Hello everyone, my name is Mel and I’m really excited to be joining this community!!

As you can probably tell by my UN and icon, my favorite Pokemon is Meowth, and I’m definitely going to be collecting Meowth merch! I’ll also be collecting Team Rocket and Brock merch, along with some Pikachu merch and whatever else catches my fancy I suppose!

I’m most interested in plush, figurines, and animation settei.

I already have a handful of items so far, though I hope to have a whole lot more!

Anyway, that’s it for now! :D Thank you all for accepting me into the community, and I hope to make more posts in the near future.

I got home from school to a package at my door! Being 11 I can't exactly order things all the time, so it was a big surprise :D I opened it up and I think I died a little from all the cuteness <3 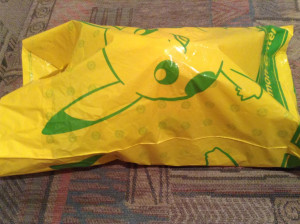 Everything was inside this pokecenter bag, which got me even more excited *w* 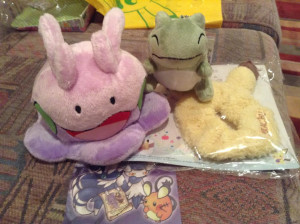 Thank you SO much

raichu_love! I love all the gifts and you were an amazing partner <3

I've been on LJ forever and you may recognize me from some of the other similar buy/sell/trade communities, but for some reason I never joined this community... until now!

I collect a lot of toys; many are video game related merchandise, but my largest collection is My Little Pony. Right now I'm moving, so most of my collection has been packed up (*sob*), but I have a bunch of collection pictures on my Instagram: https://instagram.com/ringwraith10/ The few Pokemon toys I have are scattered around throughout all of the other toys -- I didn't have them organized by category (they're all friends!) but I will probably have a better organizational system after I move. I collect a lot of types of toys (as you can see in all of those pictures). With Pokemon I am mostly into the games, but have been watching the anime again since it was put onto Netflix. I mostly collect plushies, keychains and artwork. I have a lot of artwork, wall scrolls, posters, and such that are not currently on my walls (well, the house that I'm in now and that I am moving out of has really bad walls that don't hold pictures), so I don't have any pictures of those, but when I move I will have a dedicated collection room to showcase all of my toy collections.

I go to multiple anime and general geeky conventions every year (Dragon*Con is my staple), so I usually get merch that strikes my fancy on a whim when I am at said conventions. I do a lot of cosplaying, but for off days when I don't want to do an elaborate costume (or for Halloween) I wear either a Team Rocket costume or a Team Aqua costume -- so I am always looking for things that will add to the realism of those costumes (for instance, I have a Umbreon plush that I carry with my Team Rocket Grunt costume and I am always on the lookout for those elusive Burger King Pokeballs that were banned back in the day).

And as for the boring things about me, I'm a library associate, I'm going to finish my Master's degree in English soon, and when I move on to my PhD I hope to write about video games for my dissertation. Usually, however, my focus is on ecocriticism (a.k.a. animals and nature within works of literature).

My favorite general things include fantasy literature, J-RPGs, animals, and hiking. I watch the occasional anime, but I am more interested in video games than I am in TV, generally speaking.

Favorite Pokemon: Vulpix, Arbok, Shiny Furfrou, Lapras, Gardevoir... I could go on but we'd be really old by the time I finished.

Favorite Pokemon characters: All of Team Rocket (Esp. that grunt who asks you in one of the games if you want to join the team, and the game forces you to say no!), all of Team Aqua (the best team!), Brock (He's so silly... and I make fun of him a lot, but really he's awesome).

I'm looking for this cutie! I never even knew Ty made pokemon beanie babies! How many more did they make? Is there any of torchic?
Before I was a pokemon collector, I collected beanie babies, so finding this on Google really caught my attention!

Also, I'm taking drawing/painting requests! I've been in a huge art block, drawing various pokemon should fix that!
These are going to be done on a medium sized canvas (its over legal paper size, but I can't find a ruler) for acrylic, or watercolor paper for watercolor :> Though I'm going out to buy more paints today, so a smaller size can be done “ヽ(´▽｀)ノ”
I think I can take up to 10 requests, they can be as many pokemon as you want, a simple or detailed background, water color or acrylic, and anything really! (*⌒▽⌒*)θ～♪
( Collapse )

I will be hosting another giveaway some time this month, but this will start us off!

Last thing, what do you guys want to see for the giveaway?

Edit: So many requests! I wasn't expecting this many! I'll try to get all the acrylic only sketches done tonight, then if I have time, work on the water color and combo sketches! All sketches should be done by tomorrow, and I'll send them to you if you requested to see if you like! Then I'll start painting :D

Looking for this little guy to suprise the husband with! Shipping would be to Canada, thanks! 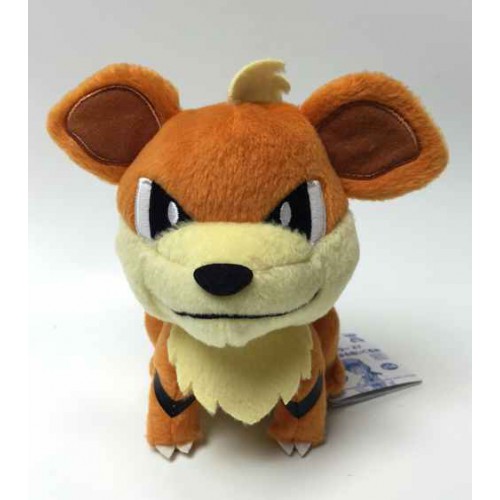 ***Another member was able to help me find this little guy! Thanks to everyone offering their help!*** 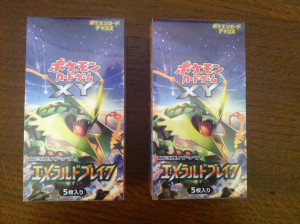 As always the art is astonishing; this expansion features a TON of incredible cards but pull ratio is a NIGHTMARE. There are 13 (13!) Super Rare prints, including 2 Ultra Rares and 9 Regular Rare cards.

I also got a spare RR Mega Gallade and some rare holos. I can trade them. Sadly no Rayquaza, Shaymin or Winona were found T_T...

Anyone can enlight me on how get the shiny promo Rayquaza from Emerald Break Pokémon Card Chance inserts Campaign? In every pack you get a card with a "0" or "1". Which one is the good one? How many cards are needed to get one promo card? Is there someone willing to redeem this card for me (you will be obviously rewarded)?

Hi communitay! i know its a long shot but i'm looking for a banpresto ufo arcanine plush. arcanine has always been one of my favourite pokemon ( favourite from the kanto region), so i'm looking for one that is tagged. i wouldn't mind if it is a little damaged but i would love one with its tag. missed one this morning on yahoo japan and am pretty disappointed about it, but i guess it can't be helped :( i know it's not cheap, and i am willing to pay a good amount of money for it as long as the price is reasonable and within my budget. i can assure that should any of you decide to part with yours, it would go to loving home and will be well cared for.
as a side note, missed the delivery man today! USPS's showed that the parcel would not be delivered until tomorrow, but alas they came to my house 15 minutes after i left this morning X(
oh well i'll have to make a long trip to the post office since i don't have a car in the US. pretty excited about this parcel and will post my gets once i got my hands on them. wonder if anyone had similar experience before? it can be such a bother sometimes.
Collapse