I thought I was only going to collect Wailord plush but I am starting to find him more awesome and now want more figures of him. Here are some Wailord items I am looking for and if you have anything else that is not a flat show me picture. 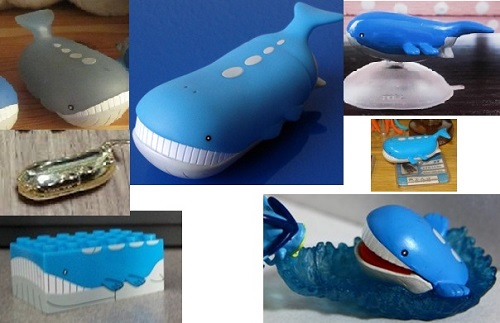 Also to make this post less boring here a b-day Cake I got in July of 2014 of my fav pokemon. 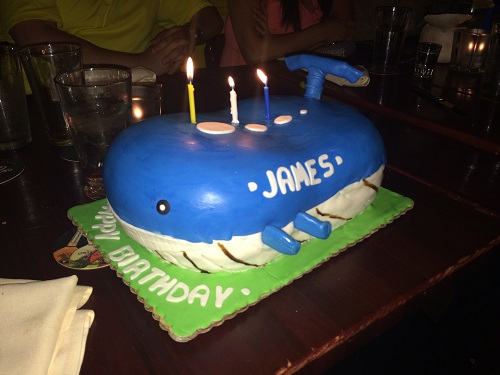 I love this brand I was told the prices by Yellowkip! She showed me the set and looks easy to finish I love marines <3 Most are my fave water pokemon also in the manga Falkner uses one of them :3
( Collapse )
Vote the pokemon will be a weekly thing then I will get the Merch for it this is for my falkner coseplay I only have Felcling Witch Falkner gets in the manga LOL if it doesn't have a plush Murch it is atto out =( click if you want it bigger =)
( Collapse )
I hosted this a month ago and thanks to the people for the request =) I found out alot about Pixlemon
( Collapse )
to do =( got buzy with work Ill do those friday =)
7 Pansear week 3
8 Mega Audino week 3 I dont have the right pink!
9 Zangoose week 3
10 Masquerain week 3 Using a different blue!

Hey all~ I've been busy choosing which pokemon to side collect recently, since I've gotten almost all of my official wants by now. I need to know what kind of customs to commission <3

Here's what I have so far! I'll update a part two in a little while. Please note that I have way more stuff coming in the mail too, especially for the dark dogs ^w^

These are my side collections! If you see tap reflecting from the camera/light it's because a good number of these are hanging up :)

On another note, I'm looking for three things. One is custom or official figures/plush of any of the pokemon I listed above.
Second, can someone print or laminate this wonderful drawing by aceattorneygirl for me? Not for free of course :) (link removed)
And third, does anyone have spare clear card containers they could sell me? I make these into little displays for my figures and I'm running out. Thanks! 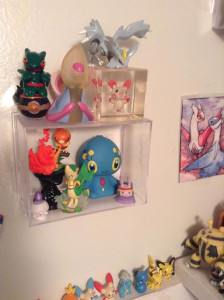 And here are some links: 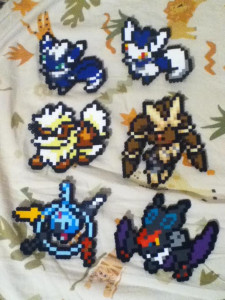 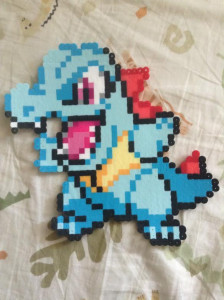 I'll have another update for the people who commissioned me this week, I got a few orders done over the weekend that I haven't updated yet ^^

I've stocked my store with lots of new fun goods, and have added a TON of plush to my sales here! I also discounted many plush and items left from my last post. Some things I stocked in the store include candy caps, roll stickers, keychains & metal swing chains, kids, mini models & more! Here's a preview of some of the items, click the pic to be taken to my store, rare-candy.com. 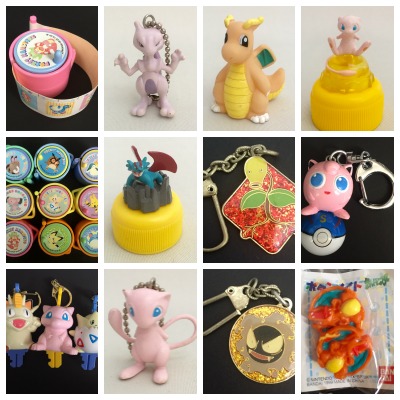 And here's a preview of the new plush I added to this sale below: 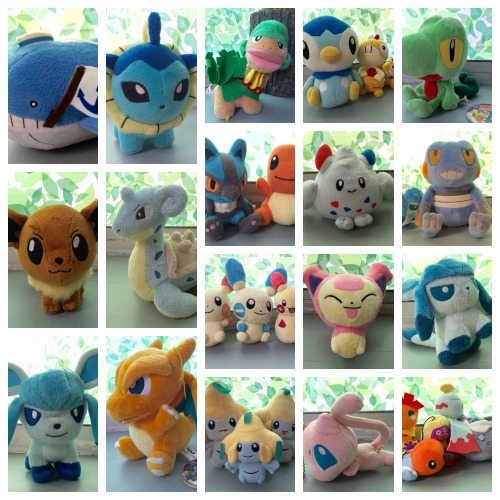 Offers for these two rare doujinshis ends tomorrow at 10:30pm EST. The eeveelution is still at its starting price. Please click on the picture below to be transported. There are samples pages.

And also my sales here: 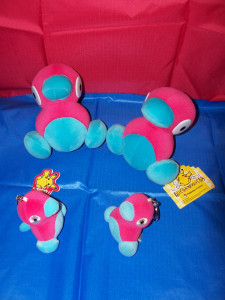 The time has finally come! I've been waiting MONTHS to post a gets post, but honestly it's been so long i barely remember what are new gets and what i've already shown you! So i figured i'd do a whole room meme since that has been pretty popular as of late!
I did a lot of shelf re-organizing and now my zigs and puffs have their very own shelves!
So let's take a peek into my room(s)! ~~~

I've made a massive update to my wish list so please check it out! <333

I'm getting tired so i don't have too much more to say, but i hope you all enjoyed the photos!
Thank you for looking! :D <3

My girlfriend LOVES Audino (fortunately she doesn't have an account on here/check here ever) and her birthday is coming up in a little over a month.

If you have a metal audino (or multiples) for sale, please pm me and I'd be happy to buy them from you. They're definitely going to a loving home!

Hello again! Sorry but LJ doesn't wanna work well for me so sorry if this is messy.
I put in a ticket for help but no reply yet.
I wanted to post my updated collection and items I am seeking. :)

I am seeking Poke Box charms! PLEASE let me know if you or anyone you know has these for sale.

I have expanded my collection! :3 I am keeping track of it here since LJ doesn't like me. Www.akparchym.com/kozi

I am here with some gets, a question, and wants!
Can you believe I've never done a proper gets post? I've bought so many awesome things here, but never really showed much off since my collection post about a year ago. I'm *still* working on a few things in the new apartment and saving up for a glass display case, so I can finally set up a proper collection display, but in the meantime I wanted to share some recent gets! And with a recent grail-ish get, I just had to make a post!! Gets will be behind a cut.

First,
Gets:
Here's a preview.. an Umbreon item I've been after for some time! Betcha don't see these lil' guys often XD 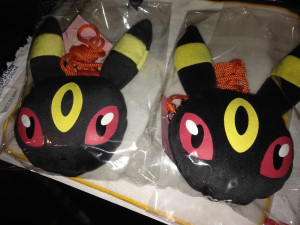 Question: If you use a display case or shelf, what do you use? Do you prefer glass/closed or open shelves? I've been looking into glass cases because I've always been into that display method as a kid, and I want to minimize dusting. I've been looking at some stuff on Ikea, and I like a few things, but I'm not exactly sure what I want yet.

Hello everyone!
I thought I would make a post introducing myself and my collection so far. You can refer to me as PinkPikmin if you like, but I do also go by Bunny (it's a nickname some friends gave me!) I've been collecting Pokemon casually since the late 90s. Right now my collection is mostly cards and figurines I've had since I was younger, but I'm working on expanding my collection with hopefully some more plush and various figurines I've been hunting for.

I did take some pictures of my collection to share with you guys! I'll put them under cuts so you can scroll past or open up whatever you are/aren't interested in seeing. I kept the images relatively large, so be careful!

And then we have my figurines, which are mostly by Tomy and mostly very very well loved. I would love to add some more to my collection.
( Collapse )

Then there's my cards. I have a lot from the Pokemon TCG of course, and then also Topps Pokemon cards.
( Collapse )

And last but not least...marbles! I don't remember how these came packaged or anything, but just like my old Tomy figures I couldn't part with them:
( Collapse )

I've decided I want to definitely expand my Pokedoll collection and also start collecting some pink Pokemon goodies. Skitty, Jigglypuff, and Audino are some of my favorites that I'd like to start with!
I am also looking for the Pokemon Rumble U figurines, as I didn't even know they existed until they quit existing in stores.

That's all for now! Hope I have some new additions to post about soon.

Hi! My name is Jade, I've been a Pokemon fan since I was a kid, but I recently started collecting plushies. I'd love to get more pokedolls! My favorite Pokemon are Pikachu, Eevee, Oshawott and of course, Fennekin :D
This is my tiny collection, Charizard was my very first plush, a gift from my bestfriend and the reason I now collect plushies :3 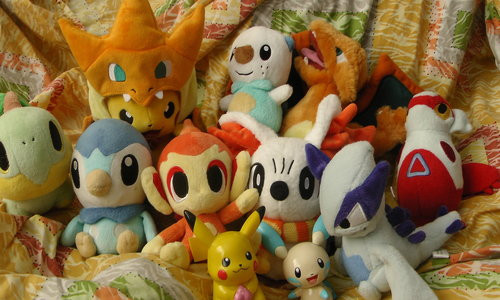 I'm very happy to be part of this community!
Collapse