Here is my next small amount of gets. Not a lot of pokemon forms this time (save for two) but all the same a good haul :3 Special thanks to

aarux for selling me one of them.

The reason I asked this question is because I think I might need a new grail. :)

Don't forget guys that my auctions end in a little under 12 hours at 9pm EST tonight!

I've been waiting since firday to post this since I was a way on vacation with family. And on firday right before I had to leave my holy grail arrived x'D So I'm very happy to finally share all this overwhealming awesomeness with the comm (◜ᴗ◝ ) This post is very image heavy..

What month is it? 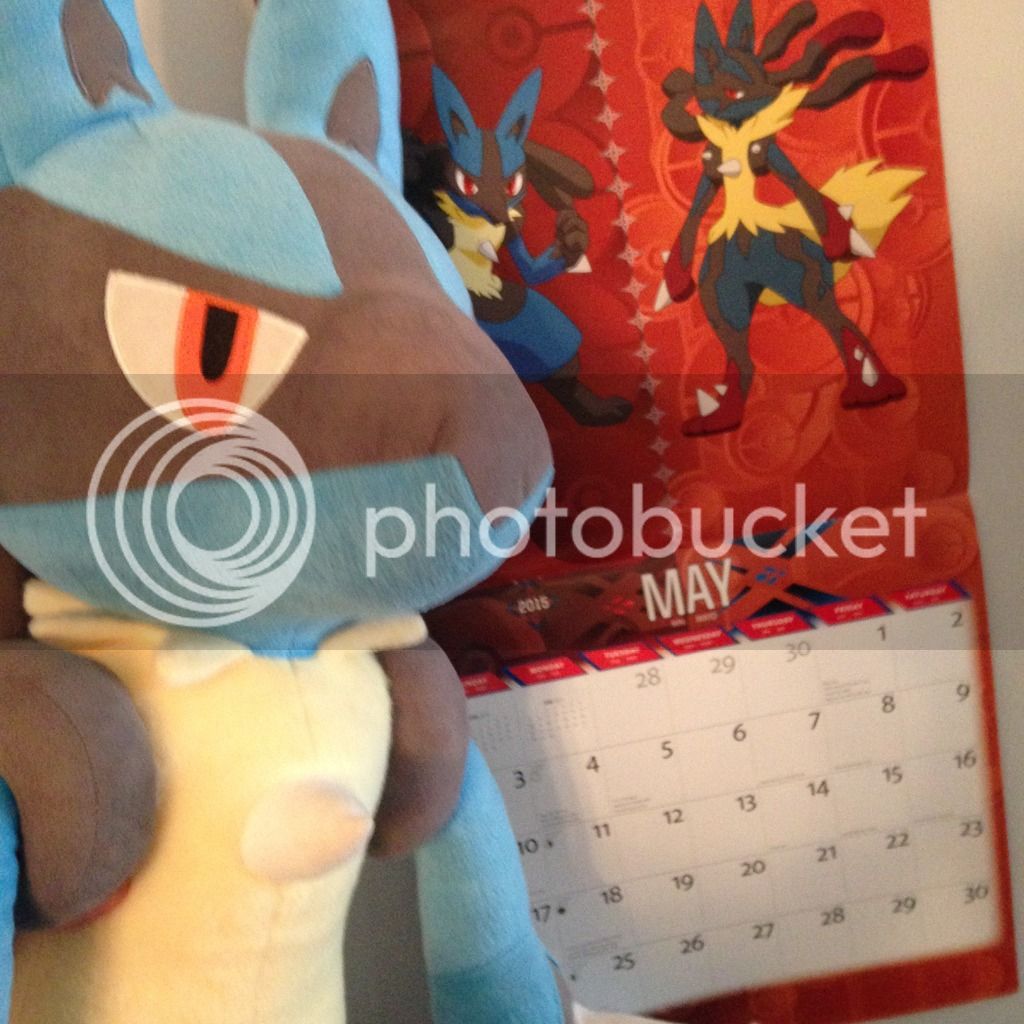 ( Collapse )
Which Starter? Why not all three?! :D

And lastly a small want...
I'm looking to buy this Latios figure, I think it's a jakks... I have the Geodude which I got ages ago but he didn't come with the latios and the set on amazon is like $40 o - o' so if anyone has just the individual Latios for sale please let me know :D

This is a real bummer to do, but with recent happenings in life, I've got to sell off my Vaporeon bell plush.

She's in near perfect condition with some dust on the tush tag.

You can find my sales rules HERE and my feedback HERE 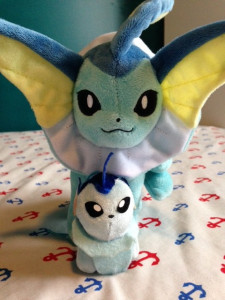 I'm looking for $300 OBO I can do a payment plan, but I'd like the first payment as soon as possible. I ship from the US and have a smoke free/pet friendly home.

Made a deal, thanks guys!

Hello I am looking to sell all my rainbow series plushes. The boxes are a bit damage and I will take close up pics upon request ! 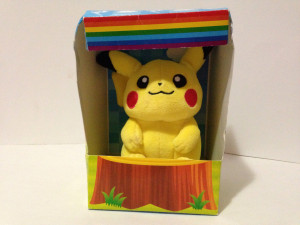 
I also have this ones: 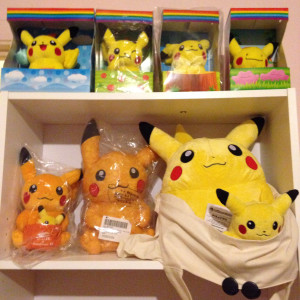 (Beams not for sale )

I accept payment plans + you can combine with any of my other items for sale from here: http://stephysanrio.livejournal.com/5374.html

Hey everyone,
All this time I've been lurking and making purchases but sure haven't updated my collection for "I don't know how long" XD

My name is Lori, I go by "kiraradaisuki" or "Kirara" online. Probably most people might know me from deviantART but yeah I'm also one hardcore pokemon collector. (Also a fan of Inuyasha and MLP Fim)

I'm in my mid 20s, half Japanese and studying to improve my Japanese skills even more, so someday I can work at my home country in Japan. I collect the Snivy line(Major), Eevee evolutions , "Dressed up" Pikas, Amaura line, and Lati@s (prefer to have it as a major collection someday) I'm also a fanartist and LOVE to draw my favorite pokemons, I also draw Inuyasha too.

Enough chat, let me show you what I have in my lair of pokemon fandom (Warning there's quiet a bit of photos)

Not sure when I'll update again, but I'm expecting packages (one BIG package sometime the end of May)

First, I hope this is not too much off-topic! :3

I´m sooooo very very happy to bought a Nintendo 3DS XL with Pokemon Alpha Sapphire!! (*_*)
I discussed here in the comm about playing this game und buying the console. Normally I don´t spend so much money at once.
But I was going crazy and bought a new(!) nintendo 3DS XL with pokemon alpha sapphire. xD
It was soooo really the best decision I´ve ever made! xD I´m so happy with the game omg.

But I have no pouch for the console and I totally need one! I would love a custom pouch with my favourite pokemon on it!
I think of a caterpie or raichu or maybe all my favourites together: caterpie, metapod, butterfree, heracross, raichu, bulbasaur, espeon... - or one with some bug-type pokemon on it. I´m thinking of a printed patterned-design or Amigurumi. But I´m open for everything else!
Do to the custom, I would like to spend not more than 30$. :3

I just realized I hadn't shared my collection since I've been a member! So it's time I do~ I collect solely Eeveelution items, with a main focus on my favs- Flareon and Glaceon.
A lot of my items were actually obtained from fellow community members with more in the mail. <3 Joining here has been great for my collection, not so much for my wallet though haha!
I also do a lot of sculpting, with a main focus on Pokemon. Once I obtain sales permission I'd like to share my work with the community too!

A few items are missing from these pics, but I'll be sure to include them next time. :3
Without further adieu! My humble little collection~

I'm still working on my wants list, I haven't had the time to write one up. >.<
I simply love the jakks Eeveelutions- even if some of them are a little derpy looking lol. I'm currently on the lookout for the ones I don't have, so feel free to let me know if you have them for sale/trade or any other eeveelution items!

I've seen lots of other people do these and they look to be so much fun! I decided to have a crack at it! ^^

After trying to order since last Thursday, having difficult with the website not letting me pay, and speaking with Pokebox. I was finally able to get the tarot cards ordered from the GB

hazel_song and I are hosting. ^^ So, now I just have to wait for them to arrive in the mail. :D

Does anyone have any of these cards for trade/sale. I'm getting really close to finishing my English card collections of some of my favorite Pokemon.

And possibly - Ninetales - HGSS 7/123 Cracked Ice Holo from Blister Packs - do they all have Undaunted Symbol error?

I think that's everything I'm missing of these Pokemon...except some World Championship reprints and maybe special promos like Snowflake stamped ones.

And, I still have some cards and booster packs for sale here - Link

Hey guys! ^_^
So today's my twenty-mumblemumble-birthday and I had SUCH an AMAZING surprise from a lovely comm member! :')

m14mouse Thank you so much for the LOVELY birthday card, I was seriously touched. <3 You should be getting your package with some birthday extras veeeery shortly. ;)

Also thank you to all of you who sent birthday wishes via Twitter, email and youtube!! I really appreciated it! ^_^

Also I decided to buy myself a birthday gift a Bayleef plush from the same place a few different comm members have purchased from. :D
She's adorable! So glad 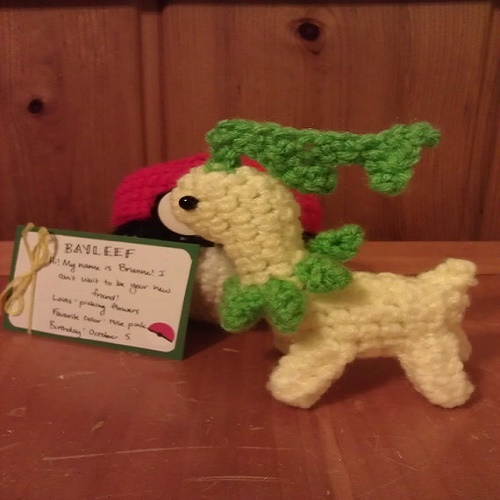 I also finally found this amazing full art for a decent price, and a new PSA graded mime card (vending series) for a really good price!
And since people are giving me money for Japan as a gift, I didn't get any physical gifts and just bought a few for myself. ^_^

Here are some fun cupcakes my mom made for me in 2013, a user asked about them so I figured it would be fun to post!
She's in Denmark this year so I can't see her on my b-day. 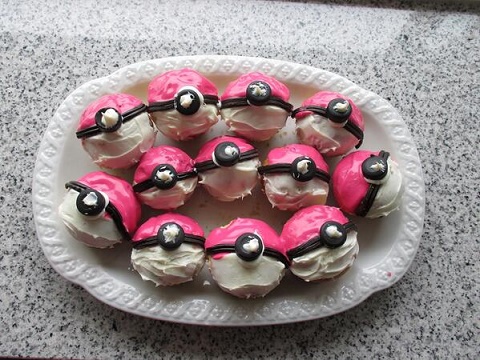 And lastly a small sales plug, as I am still saving for Japan in TWO WEEKS! :D WEEE!
PLENTY OF NEW ITEMS NOT PICTURED HERE! 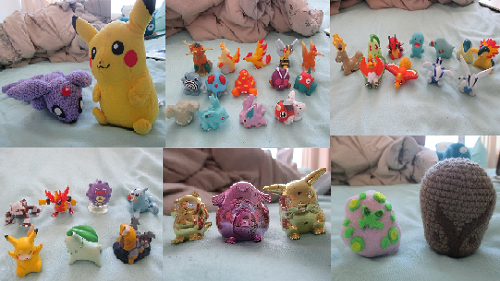 Ok, that's it from me, I'm going to get ready for a dinner with friends and family but thanks a ton for reading!

hello i live in italy
I'm looking for some cheap candy figures
in particular, helioptile. goomy. fletching. megaAmpharos,
but make me your offer

I have more korean erasers for sale (FINALLY GOT MY UMBEON AAHHH)  and some new stickers,new cards, new eevee merch and more. I also lowered the prices of older merch. I will do bulk discounts. I just want this stuff gone. So help me out. I don't want to toss it or take it to goodwill ;____;

Today is a very special day!!
What are these pokeballs doing here??

Also i just want to make everyone aware that this will be THE VERY LAST SALES REMINDER FROM ME! So if you want something, please either buy it now or have me hold it for you! I will be grouping everything into lots to sell probably on Ebay on next Tuesday!
I have been undergoing a rather large amount of stress lately, and i am making changes in my life to lessen it. One of those changes is to stop selling, for the most part. It only adds to my anxiety to worry about packaging and getting items out during my busy enough work week. I may pop up with a small sales once in a while, but not often! So please if you want anything here, let me know! Click on this sentence or the spinda photo to go~

Also my Settei Auction is still going on! I will post a formal reminder for it in a few days since it still has about a week to go! Click here to look~

(PS- i'm so excited about the Hiroshima pikachus i can't wait for that magikarp hooded pika plush!! >w<) I just wanted to drop a quick reminder for my auction for these little guys that will be ending tomorrow evening. I'm auctioning all three of these spooky cuties along with a custom slot for a Pokedoll sculpt of your choosing! Each come with their very own tush tag and custom painted hang tag. Just a reminder these little guys are OOAK, I will never make these spooky guys again! Follow the link below if you want to take a closer look. Thank you!

Just a quick sales post! It's been a long time since I've posted anything here, but I'm still collecting a few things here and there. =)
( Collapse )

The following are discounted heavily because they’re also available on pokemoncenter.com. :P
EDIT 5/21/2015: All have been sold!
( Collapse )

So it's been a while since my last post on the comm. I still haven't gotten around to my collection update yet sadly. At this point, it's anyone's guess when that'll happen, lol.

Anyway, I really need to clear out space now so there's a few things for sale. 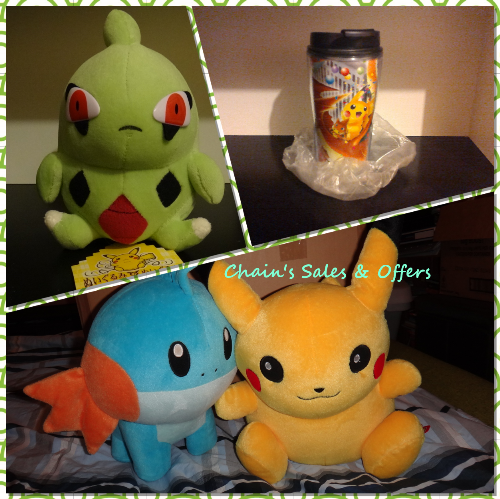 Sales Policy
- Sales permission granted by entirelycliched from April 2013.
- Feedbacks: here (current) and here (previous).
- Shipping is from Australia. Up to 3 standard size pokédolls ranges between $7-9 to ship to most countries via economy Air Mail.
- I am a slow shipper! I usually ship things in bulk, which means I need to settle all transactions first before finalising shipment.
- I am not responsible for any lost/damaged parcels.
- Please ask any and all questions before committing.
- If you are interested in the condition of plush that I did not describe, please don't hesitate to ask.
- I can hold if you are committed.
- All offers end on Monday 25/5 at 7:30am ACST. Countdown >> HERE <<

Hope you have a great week ahead! I'll post back again soon with more items to come!

Hi guys, I'm not really sure how to go about seeking out people for this, but here goes:

There are a few second hand items I have found on Gumtree (website) that I really want and haven't been able to find anywhere else, but the seller is in Adelaide and doesn't want to do delivery to Perth. Can anybody help me out? I am happy to offer $$ incentive.

If someone is comfortable doing this for me I would be really grateful!
Collapse