So yesterday and the previous day I got a LOT of mail, cause I ordered a box ( or two) of pokemon kids from kinushop (anybody else buy from them?) And a GIANT box of well, mostly broken pokemon, however there were maybe 70 in good condition, and a couple of tomys, a kid or two and some random figs I ordered from here

Here's the main ones: 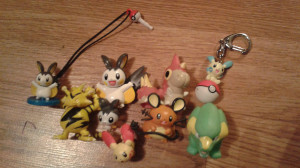 ♥ Emolga tomy, pita poke, cell phone strap figure ♥, Dedenne tomy (these were an impulse buy), Minun bell strap, Electrike kid, Plusle figure, Electavire tomy, and a Wurmple kid!
I'm collecting all the electric types and the ones that aren't emolga are the newest additions~ (except wurmy of course XD

Okay, okay so I know my main two collections are Emolga and Gallade and I REALLY shouldn't do this, BUT...
I have four side collections now 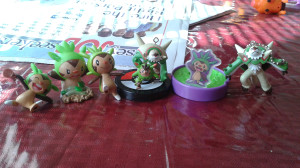 ( Collapse )
Second!
Zubat line!
A lot of people hate this pokemon cause it's literally everywhere but honestly I love it aaaa 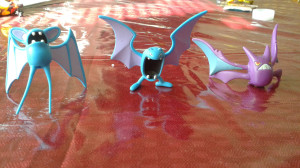 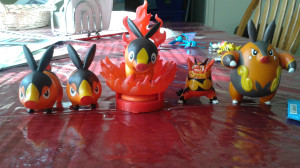 And last but not least...
Ekans! 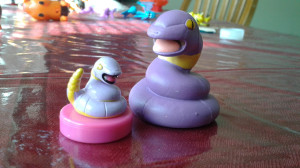 Also a little reminder of my emolga wants post: http://pkmncollectors.livejournal.com/19394239.html

Recently I have a certain craving for buying the largest Pokemon plush available!

With no luck I was searching eBay and discovered a ----- in Brand New Condition!!!

You might be wondering what it was that I acquired so take a look under le cut...

Please take a look if this or anything already posted is of interest to you!
http://pkmncollectors.livejournal.com/13646573.html

I am open to haggling if it is absolutely necessairiy. I am trying to save up to buy Pokemon Time things so any sales would be appreciated!

This is a figure line that not many are too familiar with, but I LOVE them and have done my best to try and get them all in box! The older ones (when they were labelled as "Subarudo") will be another task in itself and I'll get to those... one day.

Anyhow, I'm not too active on here, but I do tend to lurk, and this is a line that doesn't get brought up too often either, and I mostly have used eBay to see when the new sets will be out and what's in them. I haven't seen ANY news on anything this year for the new movie promos or anything! Last year they did a release for the Diancie movie, and a little later the Hoenn Mega starters and Primal legendaries. Those were the last I've seen. I wonder if Tomy ended this line? I really do like them and their amazing ramune candies^^

Just curious if anyone heard anything about any new sets!

Been an eventful weekend, but some of the highlights are pokemon-specific! 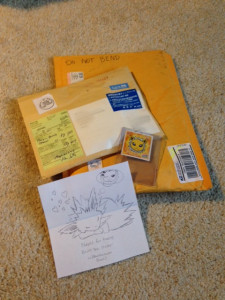 Also! I'm slowly updating my wants list with the things I do not yet have of Eevee and its evolutions, and I'm open to trades for anything in my sales post here!

Lastly, I've still got open slots on my custom art page, for anyone interested in getting some unique art of your favorite poke.

EDIT: Can anyone tell me how to change my preferred shipping address on FromJapan? Its still making me ship to my old address, which I no longer live at.
Problem solved!

Hello xD I got a lot of pikachu stuff recently and decided to re-organize my shelf and just clear it out and leave pikachu stuff on it!!

tsuiling for helping me find some of the pika plushes! :D  and

chocolate_chip for my pikachuuuu! watch pick up :D so so happy ^_^


also is anyone interested in trading amiibo? I am looking for lucario and greninja! I have a pacman as a spare or could customize an amiibo for you? samples:

EDIT: I forgot! I am willing to trade any of my rainbow plushes for the laying rainbow plush is the only one I am missing!!!! XD help! <3

updated my sales post with a lot of tcg, plush, nip tomys and more! check it out :)

WHAT ARE THESE AND WHY HAVE I NOT SEEN THEM BEFORE

AND WHY COULD THEY BE THE CUTEST LATI PLUSH TO EXIST

Hello everybody. It's nice to post something again. Anyhow, there are a few hardcore fans here of Kaiyodo figures such as Pokemon TFG. Unfortunately for Pokemon TFG fans, the project was cancelled before it could even shine to the fullest. I'm not that much of a fan of official Pokemon figures but anything made by Kaiyodo is an exception. Kaiyodo just makes amazingly awesome dynamic figures plus they're so small, which is good because I have a thing for super detailed small dynamic pose figures. So finally decided to start sculpting the 4th wave of Pokemon TFG, unofficially of course. Some characters are suggested by the legendary

zefiru. This guy is a total know-it-all in everything Kaiyodo and I bet he has the widest range of Kaiyodo figures in this community. I'd like to thank him for the character suggestions. Some characters are just randomly picked by myself. I have made a couple of figures more but for now I'll be showing these first. They are all work in progress and should be painted once I'm done sculpting an amount that I'm satisfied of. I hope more and more people will join this dying game to light up Kaiyodo fire again. For sculptors in this community, let's make this a trend! The more people to join this game, the more TFG miniatures we will have. Now considering every Pokemon has at least 20 moves and there are 700+ Pokemon characters, the possibilities of tradeable figures is practically infinite! What are you waiting for? Zefiru and I will ignite the spark and hopefully many will follow! If you guys have any character suggestions to add the the 4th wave, feel free to comment :)

For those who don't know what Pokemon TFG is... It's Pokemon Trading Figure Game. It's patterned on tabletop miniature games. The official figures are very small yet very detailed. Here is my thumb for comparison... 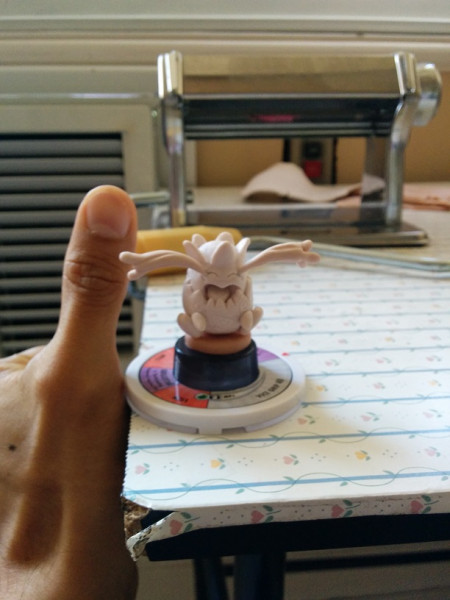 ( Collapse )
Delivered just this morning; isn't she a cutie :) She's about the size of Pikazard but a little bit taller with the ears.

She's on sale at the Pokemon Center too but I was paranoid and preordered a few months back (thus the plastic bag). I'm not sure why I expected her to be bigger because this is a good size compared to some of the recent gigantic plushies!

June is going to be so busy with the Eevee releases, Idol Pikachu, Monthly Pikachu and Hiroshima Pikachu! \^o^/

Reminder that my auction for some poke coins ends tomorrow afternoon.


Includes these and more!
Click the Pics to go! Good afternoon!
I got some days ago my custom plush ^o^ I wanted to show you my newest get!

Thanks guys for reading and looking!

i wanna see what you guys think the next wave of pokemon center pokedolls is gonna include. hoopa? shiny rayquaza?(personally i hope so) will they be movie related or random? older pokemon or newer ones? remakes or new ones all together? when do you think they're coming? and who do you wanna see end up as a pokedoll? let me know

So, yesterday something big and snuggly came in the mail I definitely wanna share with you guys, especially since I never thought I
'd own this little guy! 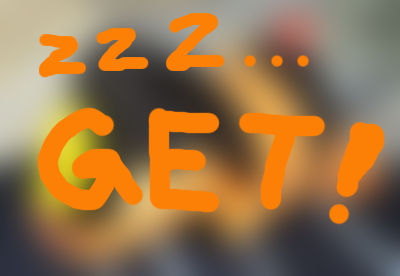 
As a second thing, I've taken out all my 1:1 or what I'd consider big or bigger plushies and made group shot with them :)
I want this to make a little picture collection and would like you to show me (group or single) pictures of your 1:1 plush or bigger plushies too :)

Thanks all for reading and looking n_n/

Hello all! So although my hot plate keychain get was very exciting for me, something even more exciting happened a few days later! And it resulted in this beautiful not-so little guy that I retrieved from the post office this morning: hey it has been nearly 4 years since i originally joined to pkmncollectors and i haven't been posting (or taking any part of the community tbh) in a good while, so i figured it would be a good time to do my first re-intro !! 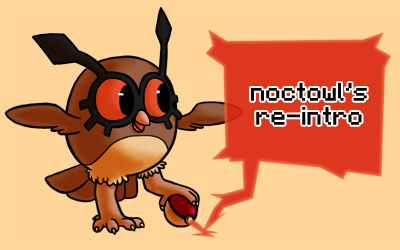 (thanks for fluna_daiyunel for the drawing !)

Long time no see poke-friends!!
Recently i graduated from college and moved myself and my stuff back home. im still using the same shelves i had at my dorm so the set up is basically the same, but i though i would still share some collection update pictures even though not much has changed lol that will be under this cut!
For those of you who dont know i mainly collect Gengar and Swirlix/Slurpuff!

My second bit of "update" is pokemon card related, i was at a dollar tree in my area and they had pokemon cards for sale (only 3 cards in a pack) and look what i got!
( Collapse )
Spoilers: I got a M Blastoise EX card!
surprisingly this isn't the first time this has happened to me from a pack of cards from the dollar tree. a few months ago i got a Gengar EX from a 3 card pack from the dollar tree! does anyone else have there in their dollar tree and are as lucky?

Next is Amiibo related and pokebug! Lots of pokemon amiibos yesterday!
I got Jigglypuff which was really the only one i wanted, i thought about getting Charazard but they ran out 3ish people before me. I got there around 8 when they opened and there was about 18 people in front of me. I was super scared they would run out of Jigglypuff but they didn't!!!
BUT! because i was already out i decided to go to other stores too, i ended up at toys r us right about when it opened it had a LONG line, like black friday long lol i didnt even try to stand in it. BUT in the parking lot there was a pikebug!
I haden't seen one in person since i was a kid! when my mall had a KB Toys i think the owners had one. Anyways does anyone know which pikabug this is? I never expected to see one in my small town thats for sure! do you think this person is on the comm?
I can only assume they were there for the amiibos, but because i just recently returned to the area after 4 years at college im not sure if seeing the pikabug is actually normal in my town lol.
( Collapse )

Sorry for such a long and picture heavy update/questions lol
If you have any Swirlix items i dont have that you're selling let me know!!
Collapse