Long time, no see! I haven't stopped by here in like, six months? Dang. Anyway,
Hi, I'm AgentGoldfish. You may remember me from such posts as "tcg trades - prepping my decks~!" and "quick sales: choco egg figures". I collect farfetch'd primarily, and secondarily collect pins, tcg, plush, and zukan in general. I also recently came across something REALLY COOL that I'm looking to sell to the right buyer.
More information under the
( Collapse )

First order of business - The Pokebox Tarot Card GB that

hazel_song and I are hosting arrived today. :D I will get everything organized and will have shipping quotes out sometime this week. I'm aiming for Wednesday so that everyone can hopefully pay by Friday so that I can ship on Saturday. ^^

Look at this beautiful box it came in -

I haven't opened it to look at the actual Tarot cards yet. ^^; lol.

Because....I was too excited about package I got from

squeakaree . This was scheduled to arrive on the 4th, but it arrived today instead. :O Eee!

Here's all the goodies -

And this is all the booster packs after I took them out of the packaging, because no one wants to wait for me to do that during the Livestream. lol.

nasija picked up for me and Leafeon would be neat since it's the only Eeveelution I'm missing in French from that set). From Triumphant, I'd really like Gengar Prime and maybe Absol Prime too. Black & White, XY, and Furious Fists I don't have any particular wants. I don't think I have any French XY or Furious Fists cards so this will be neat. And, I'm hoping to get a complete Double Crisis set, plus RH cards of the 'yenas would be neat. XD!

Any duplicates or cards I don't collect will be available for trade/sale. If you're interested in something particular from these sets or see something you like during the Livestream, feel free to comment here and I will let you know if anything you'd like is available. :D

Livestream Link Livestream was having issues so new link is - http://www.younow.com/DMarie

As usual, my dogs will probably make an appearance at some point. My livestreams are silent, so don't worry about your sound. I will be typing in the chatroom as "maitaidelight" or "risha."

I will edit this text once the Livestream starts. Which should be around 2:20 pm Eastern Time. (about 5 minutes after the original posting) Livestream has started! :D The chat doesn't seem to be working for me so I don't think I'll be able to talk to anyone this time. Sad! O: So let me know if you stop by. lol. Livestream was having issues so I've moved to here for today - http://www.younow.com/DMarie Stream over! Sorry for all the confusion! Livestream was having difficulties so I switched to another website.

Some of the card pull highlights were:
- Gengar Prime from Triumphant
- 2x Groudon from Double Crisis (now I need to find someone with an extra French Kyogre. lol)
- RH cards of two of the four 'yenas (plus Aron which I forgot about when listing my wants)
- A nearly complete French Double Crisis Set. I think I ended up missing 5 cards. Aqua's Grimer, Magma's Poochyena, Team Aqua's Great Ball (actually did get one but it's RH), Walrein holo, and Kyogre EX

And...I think I just caught up on replying to messages (except for sending card photos to latias_latios_7 and diamondphantom...which I hope to do after the Livestream. I'm sorry for the delay. I had family visiting for a week and didn't have much computer time so I got behind on everything. ^^; If I missed anyone, please let me know.

P.S. I'm also still looking for everything mentioned here - Link and I still have the cards for sale/trade here (except for Charizard) - Link I am willing to haggle on prices.

The Pokemon Boutique at the Japan LA store in Los Angeles is set to open this Saturday, June 6 from 6PM to 10PM. One of the clothing designers for the exclusive collection to be featured at this boutique, OMOCAT, has just posted more photos of some of the clothes we can expect to see on sale at this boutique! 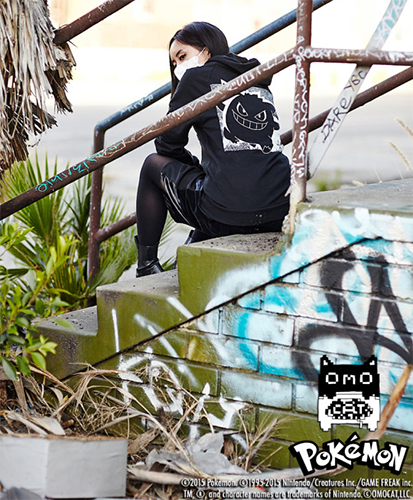 To everyone who particpated in the Pokemon Center site pickups, the items are in and I've packaged them up! Totals are available on the spreadsheet. Click the cut for info!
( Collapse )

Some of my new gets! Thank you to everyone I've purchased from here on the comm!

As you can see from my gets pic, I FINALLY got myself the Mega Absol PC plush when I did the group pickup. Unfortunately I am a little miffed because mine has some loose embroidery in the eyes!
( Collapse )
I have a lot of cool stuff sitting at the FJ warehouse and on its way to me, so that's an exciting thing to kick off the summer with. I still have some schoolwork and finals to deal with, but I'm really eager for classes to end. Feeling quite drained and overloaded right now. I need a vacation really badly.

Haven't posted on here for couple of weeks.

I just received the items from lightningkittysales from store envy and she was kind enough to let me pay through cash :D

As I talked about before, I mainly collect pokemon plush keychains.

Here are the gets: 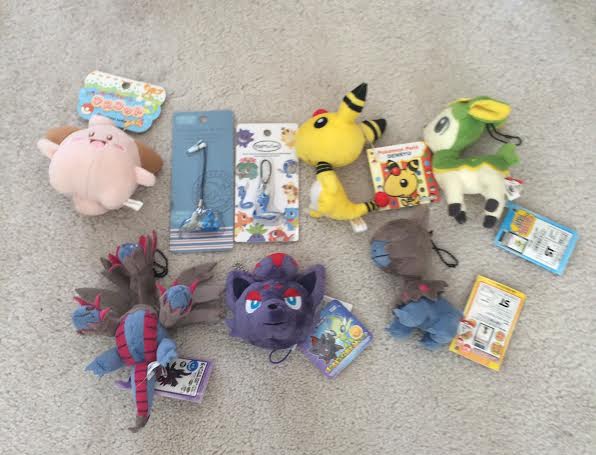 And here is my collection update! (Excuse the messy desk cx) 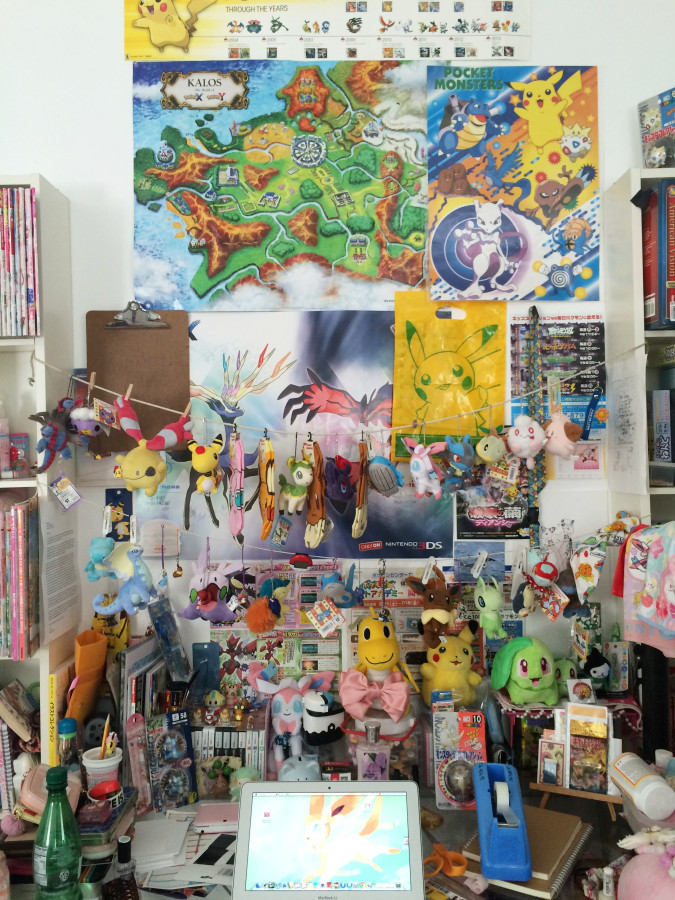 I'm especially happy about the Deino and Hydreigon key chains~

I'm still on the hunt for Pokemon Time Chikorita strap ;~;

Was in Japan last week and managed to stop by some arcades. Here are some things I managed to snag from the machines~ 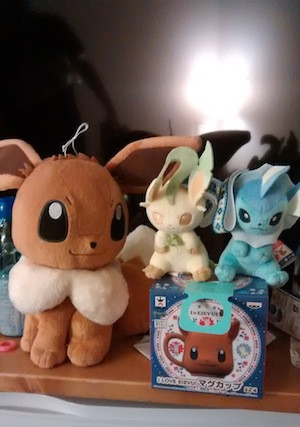 I'm probably the most proud of grabbing the mug since it took me the fewest tries to figure out how to get. I probably would have tried for the other mug if it'd be out when I went.

Long time no post! I've been mostly lurking around the community, but I've finally got some things from the mail the other day. Raikou is here to help out just for a bit. 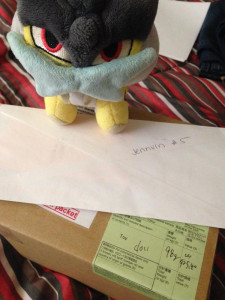 I have seen so many posts lately about Applause plush that I am seriously considering starting a collection of them! :) I love their shiny parts and how simple they are! :) It would also be nice to give my Horsea and Koffing some Applause friends, as they look a bit lost among all my other plushes at the moment! XD So this is a call to all those who have a spare Applause that they are willing to sell! :) I'm not too sure how much they're worth, though I know ones like Gastly and Abra are very rare. At the moment someone has offered to sell me 12 MIP applause plush (Squirtle, Spearow, Bulbasaur, Poliwag, Pikachu, Sandshrew, Meowth, Psyduck, Dratini, Snorlax, Seel, and Zubat) for $137 shipped. Is this a good price, or am I being seriously ripped off haha? Please let me know! XD Thanks for your help! :) 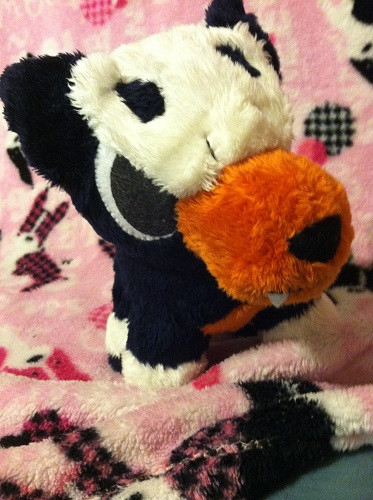 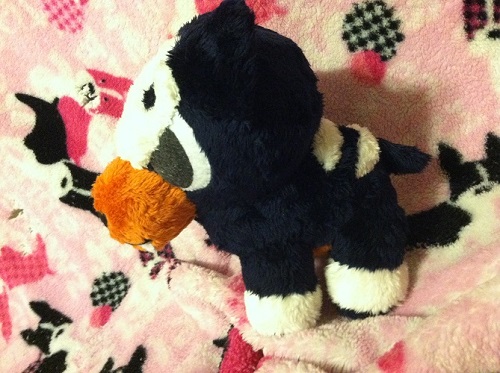 Side-shot!
He looks so amazing, at 1st I thought he was black but I'm loving the blueish color on him. My 1st shiny Houndour hehe.

Anyone going to the opening to the Pokemon Boutique in LA, California this Saturday? I'd love to meet some local collectors. Maybe bring a companion plush to the event to reconize people or whatever. :3 (I'll probably bring one of my shiny Sylveon Pokedolls to the event.) I can't wait to go! I hope one of the designers will have a Sylveon item available.

Sorry for the short post. Super busy atm. I have another update post is coming soon. Happy collecting!

More spring cleaning sales! > v < Everything that was in my previous sales post have been reduced in price. I'll also be happy to take best offers, especially on more expensive items.
( Collapse ) 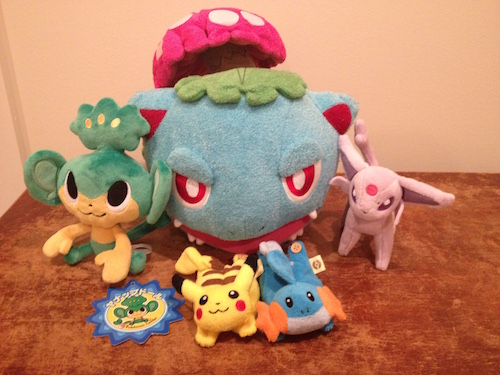 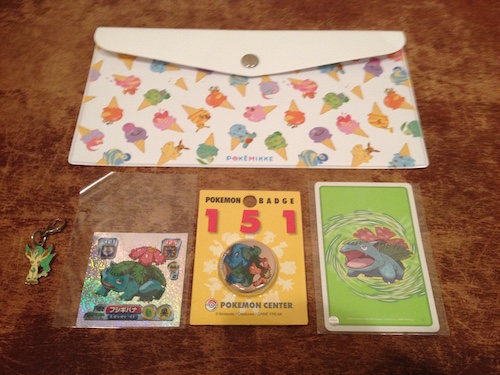