HEY HEY everyone I'm back again with some items up for offers. I'm sorry its offers its just I'm rubbish at pricing.

Heads up, Cynthia is live on the Pokemoncenter.com! She is $49.99, so you'll need to buy a throw away item to get free shipping. Single dex charms or booster packs are the cheapest things you can buy. 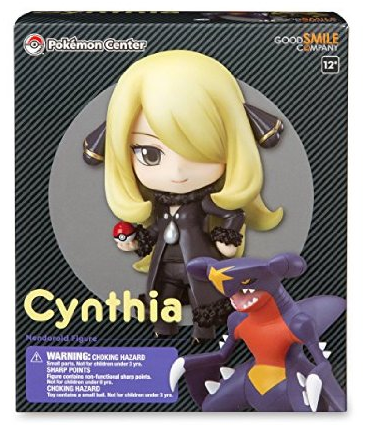 She'll likely sell out very quickly, so don't miss out!

Hello everyone!
I have some updated sales today!

I'm just wondering if anyone has any experience with the store named Meowgon And Vector Sell Stuff on Storenvy, as I ordered the pair of Kuttari Umbreon plush from them on the 8th (although they were not released until the 15th) and my order status is still awaiting shipment, my message to the store just asking about when they will be shipped hasn't been replied to either.

This is my second time ever actually ordering from Storenvy so hopefully it's just a misunderstanding and they didn't mark the order as shipped, and the plush will arrive in time for my birthday next week. ;3;

Just here to post some wants! Mostly Turtwig, Swirlix, and Torkoal. If you happen to have anything rare that I might not have go ahead and let me know, too! Chances are I'm interested in it. Thanks!

Unfortunately there has been a delay with the Eeveelu Necklaces. It's bit of a long story, but essentially there was an issue with the way they were packaged and they had to be sent back to my middleman. They will repack and send again once it gets back to them. I'm not sure how long that will take, but I'm hoping only a few days between the post office and my middleman. But at any rate, this does put the necklaces a bit behind schedule :( I'm sorry for the delay, but this sort of thing I have absolutely no control over. This necklace order has actually been very challenging and stressful in general. @_@ I know it'll all be worth it when we get them, but it's certainly not been fun. I promise I will post as soon as they are in-hand with payment information, but until then, I appreciate your patience. <3

I also appreciate your patience in regards to the Wave 2 kuttari, who are shipping from Amazon on a very delayed schedule. If you did not order Slowpoke or Kuttari, you should have received a total for your August claims. Remember, payment is due within 24 hours of receiving a total. Negative feedback will be left if you do not pay within the time-frame. (Will be changed to neutral upon receiving payment.)

Lastly, I am still accepting claims on September items, including the Halloween promo! The Halloween promo is next weekend, so I'd advise getting all claims in as soon as possible. (Especially because I will be out of the country from Sunday-Friday, and while I will still have Internet access, I will be on vacation and may not be as quick with responses during that time.)

Today I am selling a whole bunch of plush, including:

Please take a look! And here's a reminder of my last sales post, in the next couple of days I will be putting what remains onto eBay as a lot, so if you're interested in any of it, grab it now!

I was able to snap some pics of my Zoroark collection! I'm not sure what all I've gotten since the last time I showed it off, but I want to thank everyone who has contributed to this beautiful collection :)

I also got the normal version of this Zoroark charm MIP. I saw that you could hook it to other charms from the same line! I loved the idea so I hooked the clear version I already had onto him :D The picture turned out busier than I originally thought, sorry about that. Darn figures in the background!

Let's not forget this keychain badge thing! Thanks shadoweon! I meant to take a picture of all my Zoroarks that are hanging there, whoops x.x

I'm going to have to slow down sadly. There are other Pokemon I want in my life and I can't afford them all. It kills me, especially since I've been eying a few Zoroark pieces, but I've had to resist ><

Last but not least, here's a slightly outdated but good for the most part wants list http://pepperzark.livejournal.com/654.html

One thing not on the list that I'm on the hunt for is the Shinx Pokedoll! I'd really like this girl so any help would be greatly appreciated :)

I was wondering if anyone has these two cards for trade or sale. I'm looking for the non-holo versions from the Pop Series 3 packs. 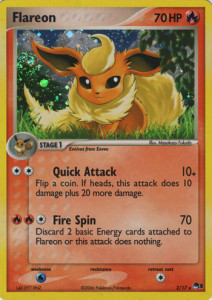 Hi, does anybody have the following items for sale? 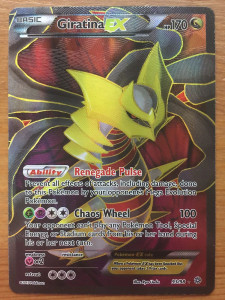 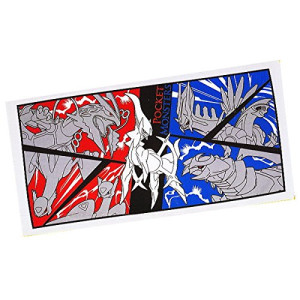 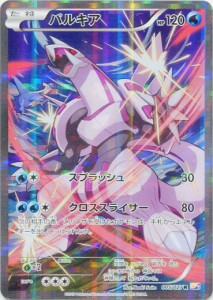 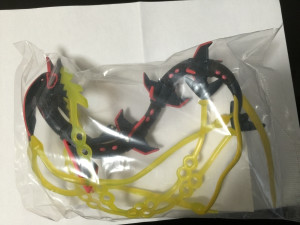 Let me know your price in the reply, thanks.

So after watching tcg openings on youtube again, I crave for more Pokemon cards lol. So I wanted to ask for some card trades in case someone is interested!
Especially for people who are interested in collecting cards in different languages since I am from Germany and thus have some German cards.

First of all, I am not a hardcore card collector, so the most I have to offer are mainly commons and uncommons!

* I was granted sales permission by entirelycliched on 01 DEC 2013.
* My feedback can be found here: http://feedback.pkmncollectors.net/feedback/view/j_ule/
* All pkmncollectors rules apply.
* I am not responsible for lost packages in the mail.
* When trading something, we will add the respective shipping costs and then devide them by 2.If you have another method in mind that you are more comfortable with just let me know and we can discuss. :)

Now let's get to what I have:
I have a lot of doubles from the Secret Wonders set (all in German) - I am too lazy to list all of them down, but if you're interested in cards from this set - mostly commons and uncommons, then just let me know and I will see if I have them :)
I also have two holo doubles from this set: Ludiculo and Roserade


What I am looking for:
- Venomoths!
- Bellsprouts and Weepinbells
- Omanytes
- Charmanders
- commons and uncommons from early sets (team rocket, Neo sets, e-reader sets!)
- Natu and Natu half-art from Roaring Skies set
- these cards: Here I also have a link to my favorite artwork cards I am interested in too:
http://j-ule.livejournal.com/8228.html

The cards I am trading are all near mint-mint and I'm also looking for cards in that condition.

Has one popped up in the community recently?

Good news for me, i'm FINALLY moving. This has been an idea in the making for a long time, but we finally got a little support from family and we're getting out of here. I was wondering though, how on earth i was going to manage to move with a hoard of tagged plush and numerous flats that i really don't want harmed but clearly we'll be low as far as cardboard goes. If you have how did you manage to move you collections without any casualties?

And then earlier today i was talking with a community member about selling off allot of my old trading cards. I was going through them and found a ☆ card. Now i know they're worth a good chunk of money but i'm not really sure how much each card varies in price though. I looked it up on ebay and the prices where so jumpy i'm not really sure what to price it at. So i have a regice ☆ in mint condition. How much dose it normally run? 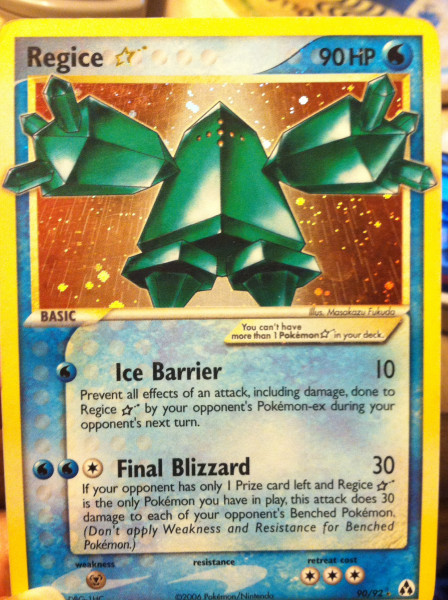 
Does anyone have the petit shaymin or petit bulbasaur for sale? 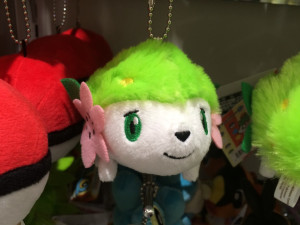 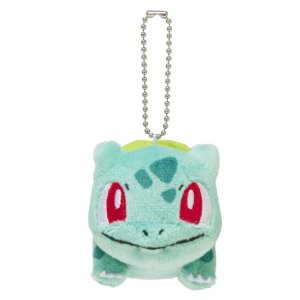 Thanks for all your help in advance!

Hello hello! So today I got a HUGE lot of metal figs ive been waiting for! Some of them are pretty damaged but still very exciting..my collection just gained over 80 more figures including a grail of mine!

Here are the newbies-

Now I've had so many issues trying to identify metal colors.. mainly between the 2 blues and I was convinced there was a medium purple that was slightly lighter/warmer than the DARK purple and I finally have proof!

Lastly Im still looking to identify these two figures.. they are metal but dont appear to go with the Metal Collection.. someone mentioned they had a Togepi similar to them.. they said it was a Gacha prize from the "GD Collection" Does anyone know about these figures or that collection?
The two middle figures are the ones in question.. I photographed them with their metal figure counter parts to show the difference in size and style
( Collapse )

And now onto SALES!

I have two tiny additions to my collection!

Now for my wants:

I have gotten most items I really wanted for my Hawlucha collection. But there's a couple that keep on eluding me (click the thumbnails for the full pictures):

Hawlucha Battle Wheel Strike. Picture found on a Japanese collector's blog. This is from last year's movie promotion and I never saw anything from this series for sale :(

Hawlucha Ramen Noodles sticker. Picture found on twitter. I have the one from 2014, this one is a new 2015 release. If you like to eat ramen noodles please keep me in mind if you find Hawlucha? ;w;

Hawlucha gum insert info sheet. This should be found in a 2015 movie release of chewing gum, so recent! I have no idea on where this picture even comes from originally (found it in slothyshroom's collection), I've never seen anyone selling these papers.

This Memo pad from the Oops! promo... or at least the Hawlucha page from it (image credit slothyshroom).

If you have any of the items listed above, or anything else with Hawlucha (see my full wishlist here), or know where I can get them, please let me know!

Thanks for reading and, as always, happy collecting!