So apparently the PokemonCenter website updated with new stuff (Substite merchidise). The Cynthia Nintendoriod is also avialble on the site too.

Here is the link: http://www.pokemoncenter.com/Pok%C3%A9mon-Center-Nendoroid-Cynthia-Posable/dp/B00W8K3B92

Since the Cynthia released is making me remenber the Red Nindroid I missed out on ordering, does anyone know where I can get one without breaking the bank?
I've looked on second hand stores and prices are way too high for me.  Even in japan they are going for a very high price.

Happy Thursday to people on the East Coast :3
-
I'm still looking to complete to my God Llama collection (aka all Arceus plate forms) I'm still looking for these two guys. Fire, and Steel. It can be MWT or TTO, as long as it's legit and not a bootleg. Thanks for looking, and have a good night/morning. :D 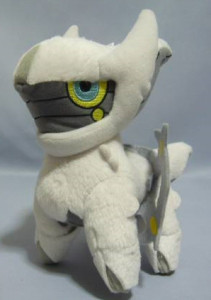 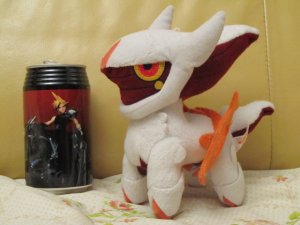 It's been awhile and well this is why. I've been working really hard the last couple months on finishing this big project. What is it you ask? It's a custom scuplt of each original #151 Pokemon. The whole Kanto region and I'm selling each one. Blubasaur to Mew are available for straight sale along with all the Kanto mega Pokemon, Kanto gym leaders, Kanto trainers, and a couple shiny Pokemon from the Kanto region are up for auction. This is a big collection I'm proud to say I've finished and I hope you all enjoy. Take a look under the cut for details. Thank you.
( Collapse ) 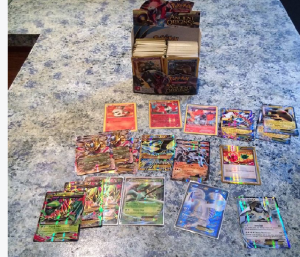 so recap my video https://www.youtube.com/watch?v=X-IhD32WSNI

I am still looking for solar birth volc but my pull are really good WHY AO WHY?????

so cards that love my this version is an ex... Giratina why do you love me sooo much Q_Q https://www.youtube.com/watch?v=c_aBAl-wtk8 to see the awesomeness

fire or fist the special energies

skys we don't talk about skies 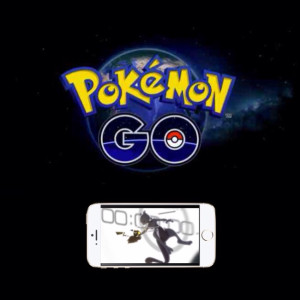 If you haven't heard in 2016 a new Pokémon app call Pokémon Go will be released! Exactly 20 years after the first pokemon games!

Pokémon Go will use real locations to encourage players to explore the real world in order to capture new Pokémon.

It also features a smartwatch (go plus) that will vibrate to alert you there is a pokemon nearby! No need to be staring at your phone all day 😄 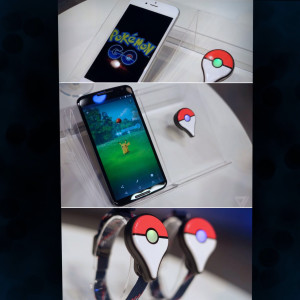 There is no price available for the watch yet however the app will be free!
Who's excited? 😊☺️😍

If you saw my collection update, I mentioned that I was going to start selling off my collection. Well, the time has finally come to bid farewell to most of my Pokédolls.
I have added a list of items for offers. They end at 9am ACST on Sunday. 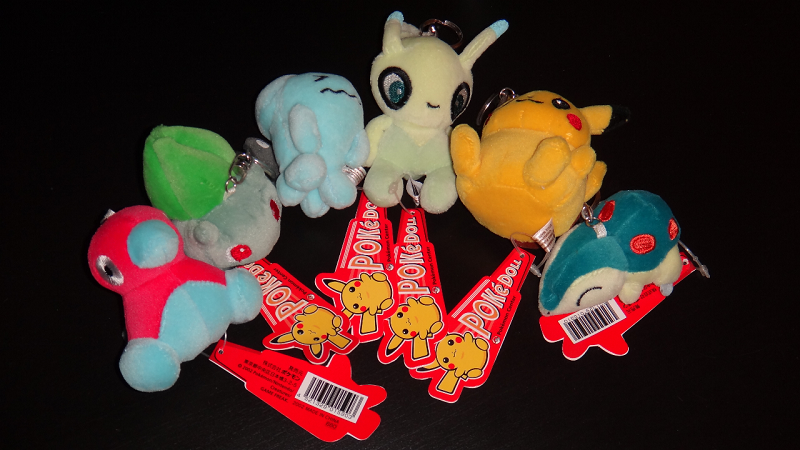 Please click here or the pictures above to be transported!

NOTE: Not everything in the above photos are for sale/offers. For a complete list of what's available, please look at the sales post.

Necklace round two is here! (And I apologize for having so many posts about these, but I want to make sure everyone is notified of their arrival so we can get payment squared away quickly.)

Payment is due for:

lovestyle - Silver Espeon -> Please comment with which method you would like! You also have 2 Espeon Kuttaris to pay for/ship. I can get you your total then. :) Thanks!

Payment still owe by (that didn't already contact me):

All packages that have been paid for will be mailed off today and tomorrow. I literally have two trash bags filled to the brim with orders. O_O Whew!

As usual, feel free to claim things on my September Post.

Good morning everyone!!!
So, I've been holding off on a big update since JUNE!
Every time I'd get a package, I'd order another, and I'd wait, and with only a few packages due in weeks, I assume, I'm here with my big update!!!
So, away we go!

hello all, I just changed my userpic just incase anyone doesnt recognise me!
today I received a very long awaited get. This particular mew plushie has been avoiding me since I started collecting over 3 years ago. When I made a wants for it

miss10 was kind enough to sell me her duplicate, I was so happy and commenced waiting by the door every day waiting for it to arrive. This went on for weeks and I made the decision that if it didnt come by the end of this week then I would give it up as a lost cause (meaning mew got away from me again!) But then yesterday when I came home there was a "sorry we missed you" card from royal mail, this was 4 and a half weeks after mew was shipped, I didnt get my hopes up too much as I was waiting for several other parcels to come. When I went to collect it however they said it came from the US, needless to say I ripped that sucker open and there was mew!! I couldnt believe it, I was sure it had gotten lost after all this time. what are you playing at royal mail seriously?!?! I have had several international parcels take a really long time lately (although this took the biscuit) I dont know if it is just the new area I moved to which is slow or if others in the UK are having this problem.
without any further ado
TA-DAAAA! 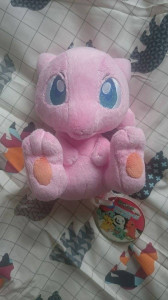 the yawarakai mew banpresto from 2005, mint with tag and 1000% cuteness, its a little bit smaller than I imagined which makes it all the cuter :3

I am also in the market for a cynthia nendoroid, I dont mind if its the JP or US version. So if anyone has one or seen one at a good price then please let me know :D
shipping would be to the UK :) 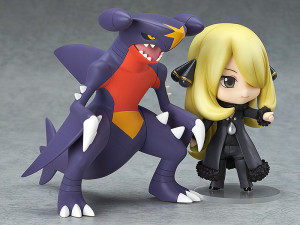 p.s. I rarely get the time to make full posts here anymore but I post all my new poke gets and finds on my instagram page if anyone else is a user and abbeymew on there too!

BUT, I saw this picture of these huge lying down fuzzy Pikas and I'm trying to figure out what they are because I absolutely need one. I can't find the picture, so I'm hoping somebody will know what I'm talking about!

Also, looking for big plushes/cuddle buddy plushes, custom plush, and cheap plush (under $10). If you have something super soft and cuddly, please let me see it! I have Asperger's, which is a form of autism, where basically I act like a normal person but I have increased anxiety/depression/sensory sensitivities. Because of my sensitivities, I love very soft/fluffy things, and touching them helps ground me and keep me calm and fills me with a strange, child-like joy; my therapist recommended I get some very soft plush and a big cuddle buddy plush. Of course I want Pokemon plush! :)

If it helps, the Pokemon plush I have that I like the feel of the most are my Jakks Talking Bidoof, my big Takara Tomy Aipom, my custom minky Ditto, my Swirlix Pokedoll, and my PC Mega Mawile.

I know this is super weird, so I'm sorry in advance, haha. Thank you for reading and have an awesome day!! <3

Hi, I got an extra Ghost Pikachu charm which will be perfect for Halloween coming up! 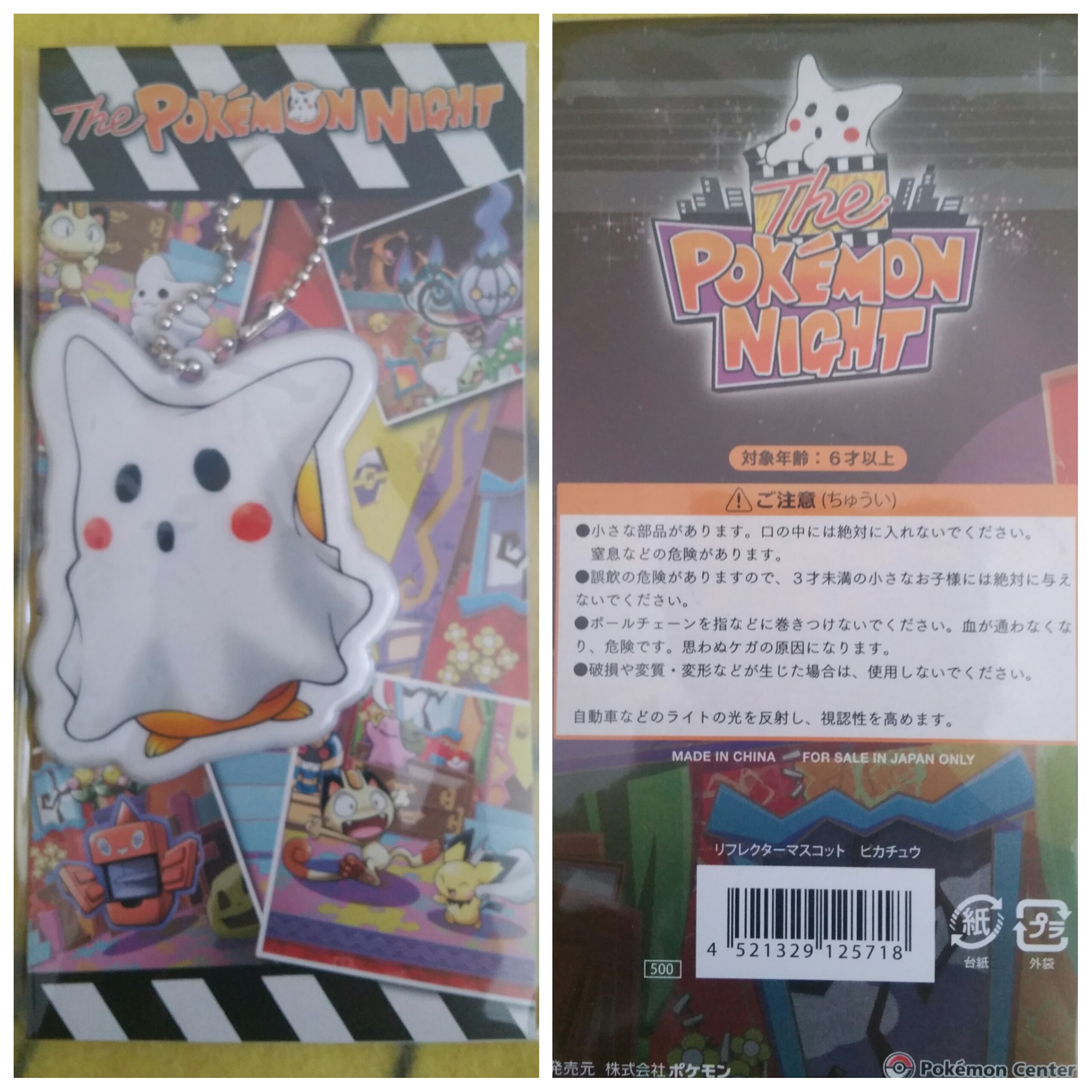 Plus my sales here~ and market/bookstore pickups here.

Well, I'm lazy and don't have the pictures of my recent Pokemon food snacks and bookstore gets... so I guess these will suffice for now!

Got a huge FJ package yesterday which contained... 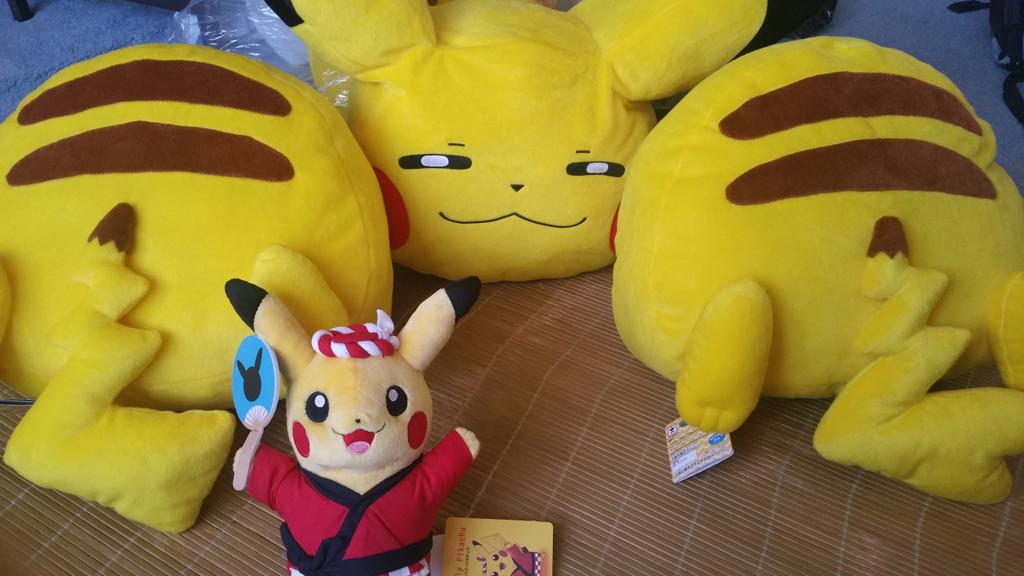 The Pikachu Mania cushions! It pretty much took up most of the box. XD Anyone have ideas for creative pics with the butt tail cushions?? Besides mooning other Pokemon XDD

Also, I got the Pikachu mug from the Pikachu Focus promo and I got in a few more sets of the Puttito cup figures so now I have a total of 5. I'm a little crazy. ^_^" I really like these cup figures and plan on getting more from other series like Sailor Moon and Gintama Ochatomo figures. Does anyone else have other cup figures?

Sometimes, I have trouble placing the clinging Pikachu onto the mug rim. It's easier on the glasses but for mugs it takes me awhile to make the hands/arms stay and not fall off. Anyone else have trouble? I guess for mugs the rim is thicker... so it doesn't stick/cling easily. At least, my little sister was able to put all 6 figures onto the mug after a few attempts!

peppermmints!!! I seriously cannot express my thanks and gratitude enough for these items!

1st grail- is the 2003 beanie Mudkip plush that has the little button feet :D 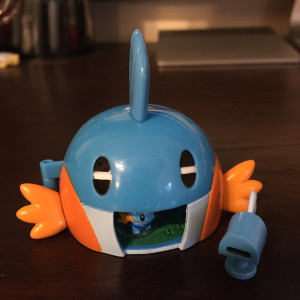 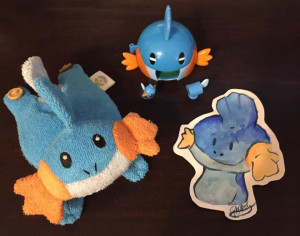 I just have one major Mudkip grail left (the 2003 DX runnin' Banpresto Mudkip) and so far seems to be eluding me but I'm hopeful and won't give up! Ty for looking at my new grail gets!

Back in the far off year of 1998, I had first succumbed to what was referred to by many news media outlets as "PokeFever". Surely, these fantastically silly creatures would never catch on, and kids would be back to playing with their other toys until the next fad happens, right?

Over a decade and a half later and here we all are, still fawing over hundreds of different little monsters. It's really something isn't it?

When going through so pictures she found her closet, my mom happened across some pictures, and one of them was this cute one. 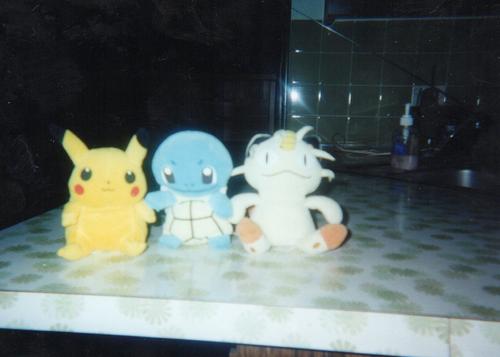 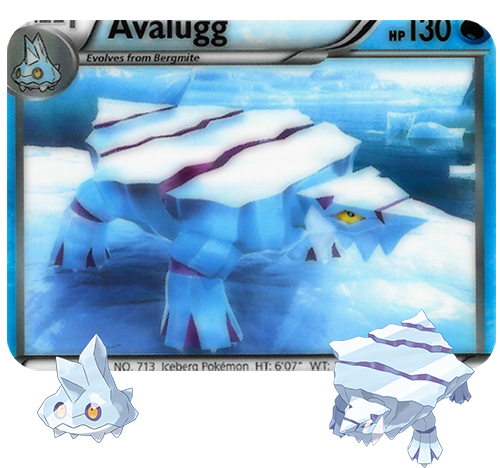 Hi friends! I come to you bearing quite a few wants.

It took me a while, but I have finally started to bring focus to my collecting (only took me 5+ years, heheh).

I absolutely love gen 2, and almost all of the merchandise that came out around that time. I'm going to try and limit myself to mostly the Hasbro figures and their shiny counterparts, but there's just so much stuff out there that I would love for my collection! I'm not on the strictest budget, but I'm not looking to spend too much.

Here are my wants! (condition really doesn't matter to me/they don't have to be in package or anything, these were just the clearest pictures I found)

Have a great day everyone!

Finally I got a long awaited package from Japan and I can make my first gets post :D Here are things I got this summer, including one very very special item~~ 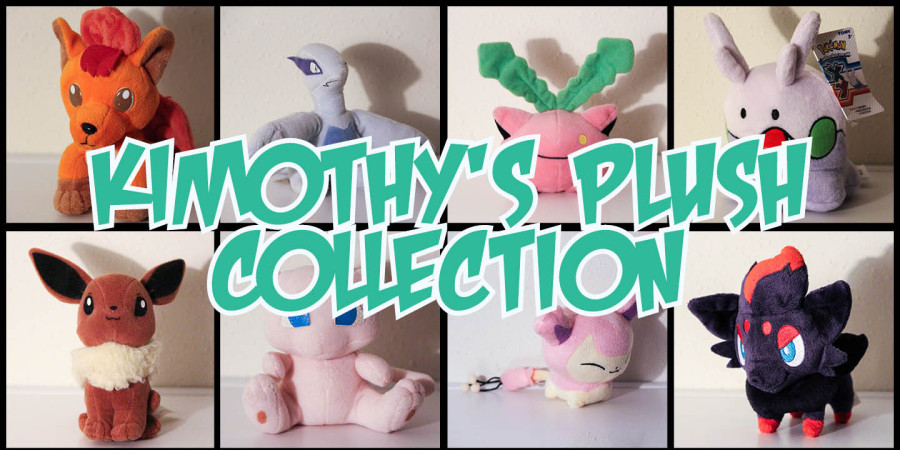