Hello! So it would appear that I have a little extra money this pay period, and I am hoping to buy some items from the Pokemon Walky campaign(s). :D I'm especially looking for stuff with Pikachu or the grass or water starters. New condition strongly preferred though I don't mind if the tag has been taken off.

I still have lots of things available in my sales post,please take a look:

I can consider haggling on some items if necessary.

I also have non-pokemon sales (such as MLP) available here:
http://shadoweon.livejournal.com/73276.html

squeakaree arrived today. So that means it's time for another Livestream! I'll be opening 29 French Booster Packs. Most are from Ancient Origins and Phantom Forces..there's also some Triumphant, Dark Explorers...and a couple other miscellaneous packs. It would've been 33 packs but I had her open the Double Crisis ones to see if I pulled the cards I needed. I got all except Walrein (so if anyone has that in French...I'd be very interested. I'd also like RH versions of two Magma's Poochyena and Mightyena). 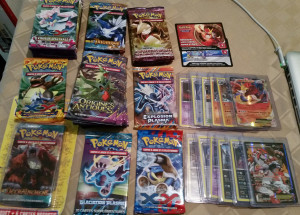 I will edit this text once the Livestream starts. Which should be around 3pm Eastern Time. (about 5 minutes after original post). Livestream is over! Pretty good pulls. Didn't get everything I was looking for so I might look for more Phantom Forces and Ancient Origins packs. If anyone likes Tyranitar - I pulled a holo Triumphant and a Mega FA from Ancient Origins. I don't collect Tyranitar, though. ^^; I also pulled an Electrode Prime from Triumphant...which I also don't collect. XD!

All duplicates will be available for trade/sale after the Livestream. So if you see something during the Livestream or know of cards you'd be interested in from these sets, please comment on this post and I'll let you know. I also have other French (and other language) cards available if there's something you're looking for.

I know a few people are waiting on my Korean XY8 boxes. They were shipped earlier this week and will hopefully arrive by the end of the month. ^^ I ordered 3 Red Flash and 1 Blue Impact. The search for all the Hounds continues! :D

If anyone is looking for particular English un/common cards, please let me know asap. I'm doing a bulk buyback at the local card store this weekend. But, I'd rather collectors that will enjoy the cards get them so if I have more than the 1000 I need for the buyback, I will gladly set aside specific cards and trade/sell them.

If you're waiting on a reply from me, please let me know. I won't go into details, but I've been having some mild health issues, so I got behind on messages and might have missed a few. I'm also spending less time online for ocular health, so replies aren't as timely as before. I'm sorry for any trouble this has caused.

Sorry for posting again so soon but just got my newest goods from Pokevault. At first I was shocked to see a huge box come in, but I think I finally now know why


( Collapse )
Thanks for looking and probably my next update would be when Christmas promotion/Kuttari's is released. I can't wait to show all of my kuttari vees as a whole. ^^

I'm looking to buy an Entei stamp, preferably one that's cheap! Don't have the money for any rare Retsuden, however I would like any of the non-rare ones! Shipped to the UK~

ALSO! I NEED URGENT HELP!!! My Entei has TURNED INTO A ANIME. Can someone give me any advice on how to fix this?! It makes me SICK just looking at it!! 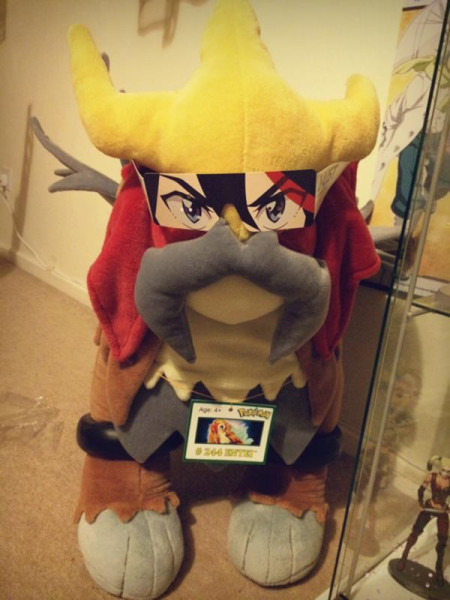 Discount opportunities are over, but any leftover items are still up for sale at their original prices. Visit my directory for all the remaining items for sale.

Today is the last day for the discount on many of the items in my sales posts! My giant box arrived yesterday, so I'll be adding new things later. Like much later because that box is ridiculous. Though I already sort of sneaked a peek in the box already, I'll still make a video of what's inside so you may anticipate what will pop up later. I dunno. If there isn't much interest, then maybe I'll change my mind. :P

Anyway! I've pulled out some other items from my leftover auction threads and so the 35% discount will apply to the contents below the cut. The $5 minimum rule still applies as well as the other rules that are outlined in my original thread which
I just went ahead and inserted into a cut too.

Regarding the remaining items in the last discount thread, I went ahead and increased the discount to 50%. The catch is, the minumum amount you need to spend is $10. This might get confusing because there are two different discounts going on so let's recap.
- 50% off on items in the previous thread only if you spend $10 minimum
- 35% off in this thread or the previous thread if you spend $5 minimum in either threads

Today is the absolutely last day for the discount, so once I go to bed, the discount won't be applied anymore. If there was something you've been wanting, take advantage of this offer!

Hello, everyone.~ I've been a little inactive recently, but I've gotten a few things I'd like to share with you. :D

You can view everything on my new collection site here: http://synysterxskittles.wix.com/collection

If you run into any issues on the site, please let me know! It's actually two sites integrated into one, and I'm still finding little things to tweak. If there's any typos, broken links, or anything that looks out of place, PLEASE let me know! <3
It's also not 100% finished and up to date, especially with the main collections x.x

Hi everyone, today I bring a bit pof a reminder of my recent big sale! Everything from last time has been shipped except for the items of 2 or 3 members ^^

Thank you for your time and have a great weekend!
Collapse