Hello everyone! It's time for the November Monthly Merch Round-Up. As usual, I will recap some of the notable merch from the last month, as well as list what's on the roster so far for next month!

November brought lots of fun merch! Here are the highlights!

December is packed with quite a bit of fun merch!


That's all for now! As always feel free to comment, ask questions, discuss, share etc! Thanks for reading!

Hey all! I haven't posted here in quite a long time (like, three years!!) but have recently become more active.. ^^ Maybe some of y'all will remember me from a few years back. :') I recently graduated and am finally able to fund my collection myself, so I am on a spree, hehe! I will be letting go of some of the stuff I've picked up over the years as well. I'm after very specific Pokédolls, and after just missing a lot I really wanted on Y!J, I figured this is the best place to ask. I am looking for MWT Japanese releases only.

(I am borrowing these images from Google, so if any of them belong to any of you and you want me to take them off, just let me know!)

I am after, specifically (in order of importance, hehe!):

These are definitely an emotional priority more so than a financial one, but if you have any of them for sale, please let me know!

Let me know what you're looking for price-wise and we'll talk! And, to help consolidate my collection.. here are some sales! Preview of what lies under the cut:

That's it, guys! It really feels good to be back. I love y'all and am glad to see that the community is still going so strong.

Just thought I'd list a few wants!
I don't have much funds at the moment, but I just made my wants list.


Click the banner to be transported ~woooooo~ *magical portal sounds* 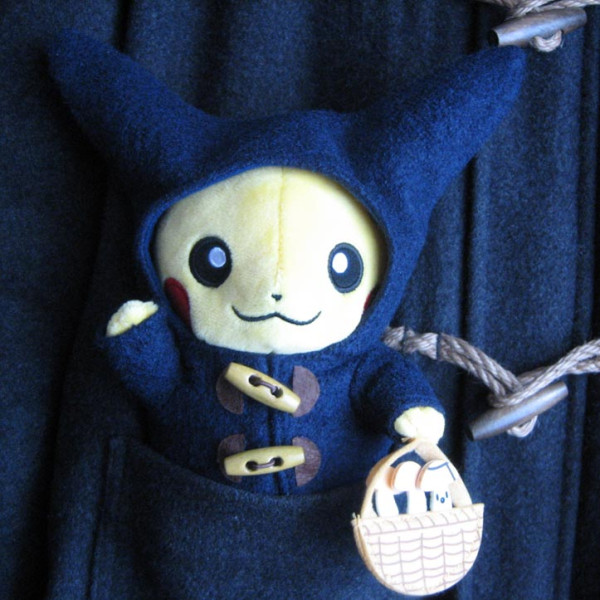 I love this MonthlyPika, one of my favorite. But OMG January *o*

So with the end of year, the Pokémon Center is killing charming us with many Promos. And of course I succumbed to a lot of things ^^
( Collapse )

Hey everyone! =) So, a lot of you probably don't know or remember me since it's been like 2 years since I made an actual post (although I have been commenting here and there occasionally!) But I joined the comm in 2010, have since moved to Japan, aaaaand, am now moving back! So naturally I'm clearing space and have some things to sell, but for today I have one very special auction for you all, for the very rare, giant Lucario Heartland plush, with tag *oooh ~!* C: 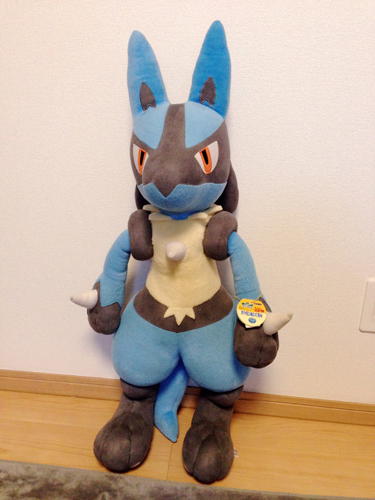 so, there is a jakks talking piplup plush from i think 2009?
i have one, but does anyone know anything about it? i haven't seen any besides mine, suprisingly, and i'm curious as to how much i could sell it for! (im starting to use ebay to scrounge up cash to spend here lol) if you know anything, help me out if you can!! thank you! <3

Hey poke-people.. in my never ending quest for metal figures i came across this image

Im assuming this is the newest metal set? And who/what exactly is the little green thing next to pikachu o.O

Also a reminder of my HUGE metal sales/trades!

Hi! This is a final reminder post about my auctions ending in around 7 hours and 40 minutes which includes things like eeveelution stuff, banpresto arcanine, and swablu butt pillow xD Some things are still at starting bid, so definitely check them out! :) Happy holidays everyone!

Here is the link to the countdown http://www.timeanddate.com/countdown/generic?iso=20151206T19&p0=217&msg=Cardwhale+auction&font=cursive&swk=1 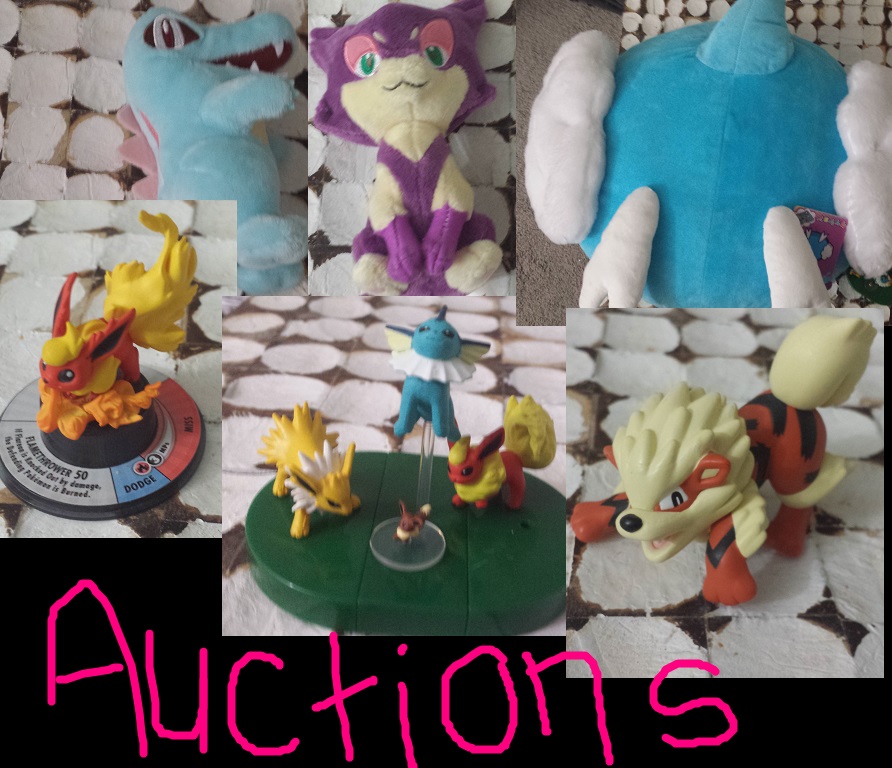 Click the picture to be transported to the auction! Or go to this link here: http://pkmncollectors.livejournal.com/20431021.html

So I've been eyeing up this lot of cards on Y!J for far too long and I wondered if anyone would like to cohost a GA with me for them? XD

I would be claiming the shiny Articuno card and would preferably do the threads! :) Looking for someone with a middleman account to do the bidding/shipping. The lot has a BIN price on it which is not much higher than the starting bid, so potential for some nice discounts! :) I'll delete this post once a co-host has been found! :D 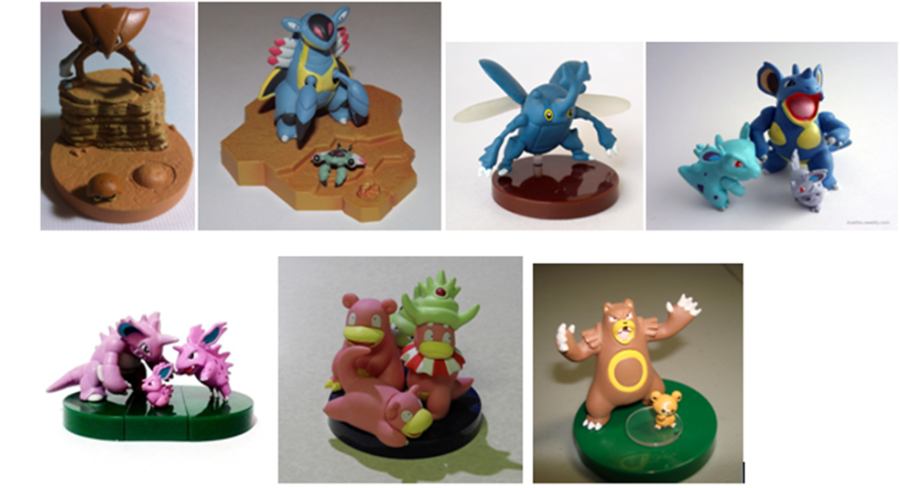 Hey everybody, this is my very first post in the community . I am looking to complete some of my zukans once my pay comes in for Christmas this month in a few days time. I DO NOT mind zukans without bases or pegs as long as the figures are available. I will also accept damaged zukans if they are at affordable prices.

I have classified my wants to 3 sections: Major wants, Minor Wants and lose individual pieces. I do hope this post will bring me somewhere closer to completing my collection.

Hey guys, I live near this awesome mall in Santa Clara/San Jose in the SF Bay Area. After work yesterday, I went to check out the Nintendo Holiday Mall Experience which is going on until the 20th. I have been going to it for the past few years and it's really awesome. They have lots of games for you to play, photo-ops with Nintendo characters, you can talk to the Nintendo workers for info, and they have freebies!

Pokemon wise, they have double sided Super Mystery Dungeon posters! It makes up for not having having any pre-order bonuses. 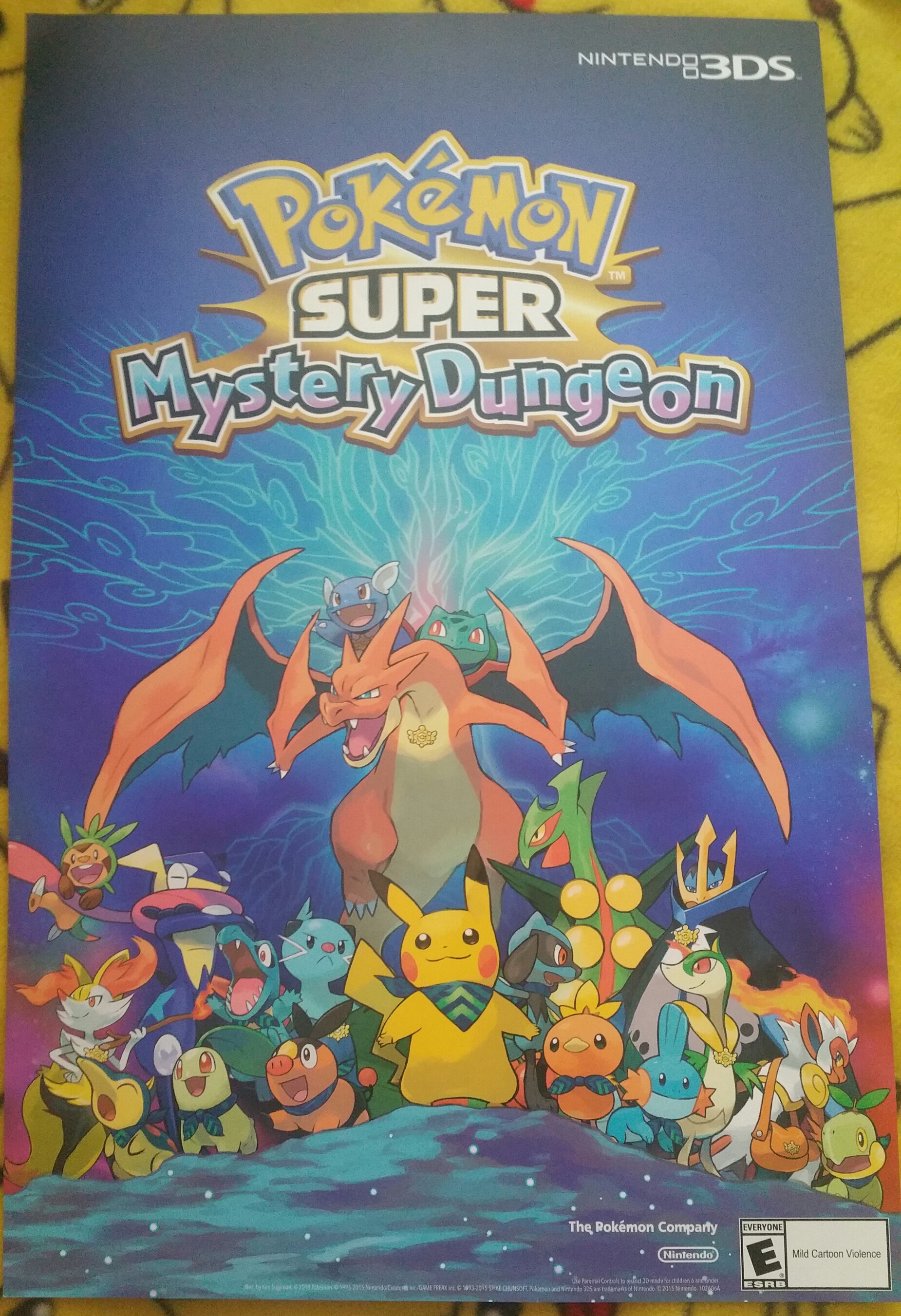 I am going back soon to get more posters. I actually know one of the workers. We used to be good friends. Who knows if she can hook me up with something special, haha. Anyways, I might be able to get more posters if people are interested. I am getting a few for some Twitter friends.

I highly recommend checking it out if you have never before! They are at 16 malls in the US... hopefully some of you guys happen to live near one.

Also, the other day.. there was a post asking what kind of Pokemon stuff was in the SF area. At my local mall, there's a store called Tokyo Lifestyle store that has some Tomy Pokemon toys!

You can buy Golden Break cards too! And there's the Pikachu cup figures.

I also went to Build a Bear which I somehow I missed seeing Pikachu on Black Thursday night... In person it doesn't look as bad as the first leaked in store pic that was floating around Black Friday.

I took the photos real fast. ^^;; But I hope they are still helpful!
Here's an article with some nice pictures of the Build-a Bear Pikachu with the hoodies. The Charizard hoodie looks cheap. :/

Edit: In the comments, it was mentioned and I looked more closely... the in store Pikachu plush they used has extra fur covering the top black outline seam in the center of the mouth... needs better quality control, lol. 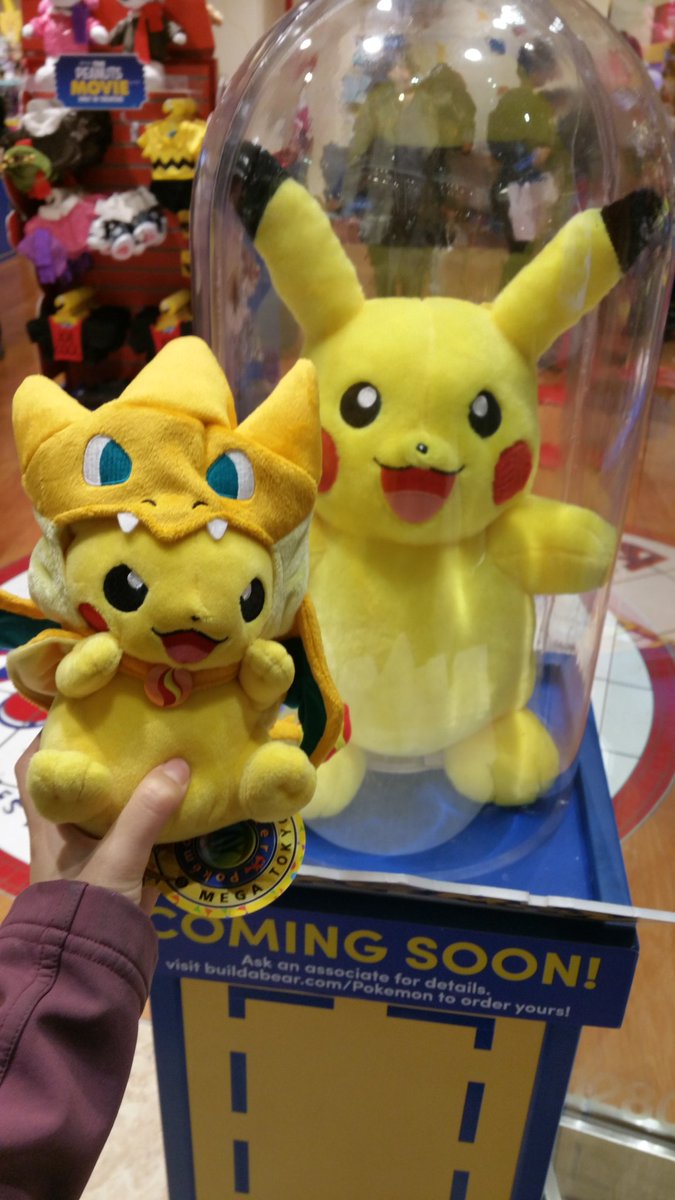 And a comparison pic with Pikazard! I will bringing my Mega Pikazard to show the kids who's better. XD;;;
</a>
( Collapse )

Open to: All, detailed results viewable to: All. Participants: 72

Will you buying the Build-A-Bear Pikachu?

What do you guys think of the Build-a-Bear Pikachu? While it doesn't look so bad in person, I still don't like its mouth, nose, and the feet. I much rather save my money for all the other Japanese Pokemon plush... Pikachu Mega Campaign will kill my wallet. x_x

Anyways, if anyone will be visiting San Francisco/San Jose California, I can always point out all the awesome places to check out. I'll be going up to San Francisco next weekend for my birthday. I'm excited to see Santa Pikachu in Japantown. XD

A while back I posted about seeing Pokemon Center plushies at Walmart.. well.. they keep introducing more 0o0
I took some quick pictures of today's stock.
( Collapse )

Has anyone else been collecting the McDonald's cards? How's your collection going? I've been able to find 7 out of 12 and two of my friends are sending Electrike and Rhyhorn. So, I'm missing 3 2 cards! Would anyone be interested in trading? I need Skitty, Pikachu, and Lotad. I also have two of each toy except for Hoopa and Wobbuffet (I haven't found those two yet) if anyone is interested in those. ^^ 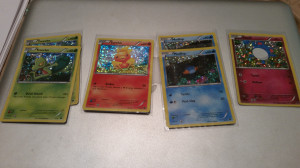 I'm also looking for trades for a few BreakThrough cards.

I'm also looking for some other RH Breakthrough cards but that list is a bit longer. ^^; lol. The most important ones are Fennekin, Raichu, Dedenne, Gastly, Cubone, both Zorua, both Axew, Smeargle, Mewtwo Spirit Link, and Glalie Spirit Link.

Also - I'm still looking for Breakthrough cards in other languages (particularly the Houndoom ones). I have some French and German booster packs coming. But no Italian or Spanish. I still need the Houndoom FA and both Mega Hounds in Korean too. (I think that's all the languages the set was released in besides English, and Japanese...?)

P.S. If you're waiting on a reply from me, I should be replying tomorrow. ^^; I just wanted to make a quick post since the McDonald's cards were driving me crazy! lol.

Just a small collection update, it seems I've collected a few umbreons :p
They're hiding under the cut, yay!
( Collapse )
That's all for today, until next time!

I was getting back into collecting and have recently been looking for the banpresto laying lucario. I saw one for sale on Facebook going for $10 plus shipping, but someone beat me to it. So I was wonderinf if anyone had one or knows where to find one. Any help would be appreciated, thank you :) 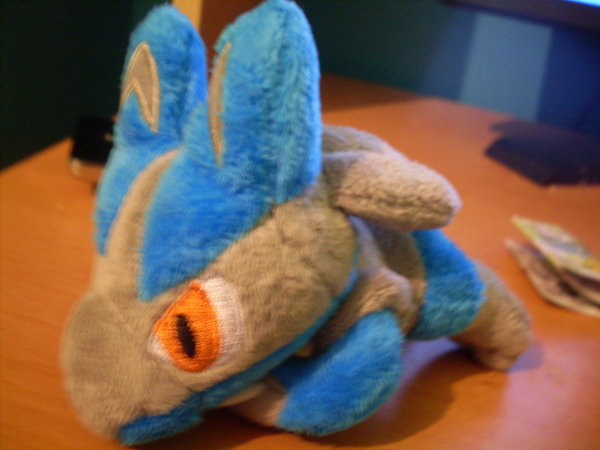 Picture is not mine
Collapse