I'm not really all back from my break completely yet, but i thought i would make a post for a crazy offer here!
I've ultimately decided that i'm only going to keep my plush sales post open from now on!
"Oh but Meg what ever will you do with those boxes of toys, kid figures, and flat items???"
That is where my pick-up offer comes in! I honestly just want them out of here! Like bye bye!
So i thought i would see if anyone that lives nearby would like to come take them for super cheap?
I'll post some pictures of the boxes later today! (ill be going out soon-ish)
( Collapse )

In other news, I hope everyone had a great holiday! I sure did!

Here is a linko to my wantslisto:

Still looking for a bunch of ziggy items! *u* Please let me know if you see them!

Does anyone know what the largest Pansear plush is and what type of material it's made of?

Also, does anyone have a Pansear Pokedoll for sale? Thanks :)

I'm just curious how rare/how much these go for? I might be looking to buy one because along with that talking togepi and mew i asked about earlier, I also lost this baby that I used to love as a kid. (I'm not sure what spurred on this need to get my old stuff back). I can't buy right now but I'm just looking into things. Thanks! Love you guys <3

Any help would be appreciated!

Also, since I'm getting more money soon I'd like to know what the normal price range for a Raichu Pokedoll is.

that's the best pokemon pun line I've ever come up with, sigh

I first started collecting Ditto items when I was around 6, collecting the trading cards first, then I got the Bandai Friends plush for my 10th Birthday, and then the Dittochu plush. I have since slowly worked building it up, but have only really used facebook selling sites.

Goomy is the latest, I haven't got the DX plush yet, but have the 1:1 sitting next to my TV. I have all the cards as well, my main one is to get the Art Academy Goomy.

One of my best collections is my TCG Coin collection. I noticed 2 years I had a large collection of coins so decided to collect them, and have so far got 226 individual coins. Everyone loves adding to them!

One a side note a help admin a big Pokemon facebook group, and also play TCG a lot.

I hope to meet lots of awesome people here, and grow my collection and help others!

Hello again everybody :) For Christmas a friend of mine bought me one of those elite trainer boxes for breakthrough, and I bought one more thing in hopes of pulling at least one of the Zoroarks. Well, I've pulled almost everything else but any of the Zoroarks haha... so I'm here in hopes of trading some of my rare pulls that I don't really want for Zoroark Break!

(sorry for the blurriness) I am offering any 2 from the above for the Zoroark Break! There's a Mega Glalie EX, a Florgess Break, a full art Giovanni, and the promo full art Dialga and Arceus.

I'm also here to ask if there's anyone who's willing to pick up something for me at the Pokemon Gym Expo. I'm in dire need of the large tin pictured here (see the Zoroark on the lid!?!) as long as it doesn't break the bank. I'm not exactly rolling in it right now and probably shouldn't be buying this either haha

(credit for the picture goes to chocolate_chip)

I was also wondering, is this a real thing!?!

It's supposedly a play mat. I don't really have the money for what the only 2 I've seen are going for, but if it's official then I'll probably have to break down and nab it now rather than later XD

Here's a link to the rest of my wants as well: http://pepperzark.livejournal.com/654.html
I'm also looking to get a US Zoroark pokedoll to replace my JP one that I will sell once I have the US one (I'd love to own both but just can't right now, and would prefer a US one for minor reasons)

I don't have anything currently for sale as I'm still going through my things. Sometimes it's so hard to decide >.< I hope everyone has had a fantastic holiday season! I'm personally not ready to go back to school just yet haha

Its that time of the year again! Here are some rule clarifications and additions, some of which I know need them! 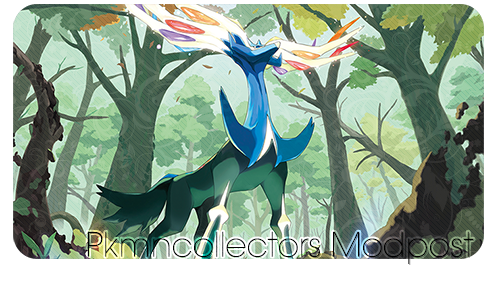 Hello community!
First off, all orders have been shipped today and I PM'd those who ordered things with their tracking #'s. I hope they all arrive safely!
Onto an exciting grail ;>
( Collapse )
Onto the wants! I'm willing to trade ANYTHING (any amount too) from my sales post (that's still available) for the top wants. Or if you'd rather straight up sell, I'm cool with that, too.
( Collapse )
Wants | Collection

Hey, I'm Elizabeth and just joined this community! I'm 29 and have been super into the Pokemon games since Red/Blue. I do have a small collection of Pokemon Plush and Tomy figures from back then that used to be a lot bigger, plus a bunch of cards and other random things here and there (and a ton of the old Burger King toys from when the first Pokemon movie came out, haha) though I gave away most of my collection a long time ago due to lack of interest/difficulty finding specific Pokemon and don't have any good pictures at the moment.

Anyway, one of the reasons I finally decided to join here instead of lurking is that I'm going to cosplay as a Pokemon trainer for PAX South! I'm just doing a generic baseball-themed trainer costume (mostly because I wanted to design my own sports logo to put on a shirt, haha. My team is the Cinnabar Cinders and the mascot is Ninetails since fire Pokemon are my fave), and I wanted to get a few wearable plush to make up my Pokemon team, which sort of renewed my interest in collecting stuff. A lot of the Pokemon I like are easy enough to find, fortunately, but my absolute favorites are Scolipede, Noivern, Volcarona, Chandelure, and Eelektross, and those seem to be a lot more difficult. I've seen pictures of the MPC plush of some of these floating around, but unfortunately I haven't seen any of them for sale except Chandelure (which I did buy), and what's available on eBay for Scolipede looks too sketchy for me to feel comfortable buying one.

So, if anyone has these for sale or knows where I can find a legit Scolipede or the Volcarona and Eelektross MPC plush, please let me know! I'd still like these even if I can't get them in time for PAX South and would also be interested in custom plush of these or Noivern if it's too hard to find the official ones. Thanks so much for any help you guys can give me!

Hi! Guess I'll start with saying that Bulbasaur is, and will always be #1...pun intended. (^_-) With that aside, I'm Adrian, and I live in CA, USA. I'll try to keep this short. Sorry in advance.

I've been a fan of Pokemon ever since I can remember. Growing up, I only collected Bulbasaur, but got anything/everything I could find. However throughout the years, with moving and breakups and what not, my collection was left to a single plush of Bulbasaur & Pikachu (shown after the cut). Until recently, I found an old Squirtle lollipop holder in my storage, and a new found desire to collect again was ignited. I then joined the community about a month ago as I found it as an amazing resource for Pokemon merchandise and information. Thanks BTW.

Thanks again collectors! I'm excited to be a part of this community. :)

Hey guys- I'm looking to sell this origami book for 12 shipped. It has a variety of different pokemon and teaches you how to make them. 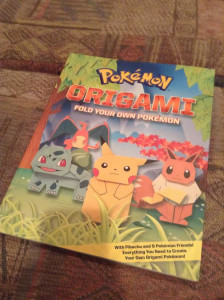 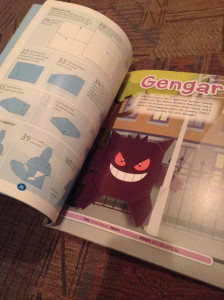 Let me know if you're interested! I do have badges at a discounted price of 12 each also, alongside other things here: http://pkmncollectors.livejournal.com/20515688.html 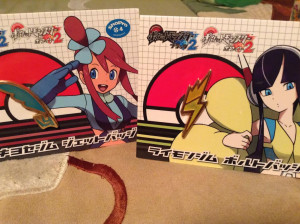 And a link to my store: https://www.etsy.com/shop/PokePerlerPalace?ref=hdr_shop_menu 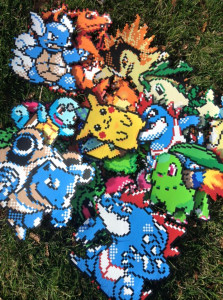 Self-explanatory title, right?! I just remembered I haven't shown you all the stuff I've added to my collections since June, so I'll let all these pictures show how many great Pokéthings have become a part of my collection for the past few months :D

Here's a video I filmed in September of my plush collection to introduce this looong overdue post!
WARNING! Very picture-heavy
( Collapse )

And I left the best for the end... Can you guess what this is?

I hope that wasn't too much! Thanks to everybody who sold or traded stuff from this post to me - and if I forgot to leave you feedback, please let me know!
I plan on updating my sales post very soon so I'll see you guys around! Thanks for reading and I hope you all have a great year!
Collapse