I've been a Pokemon fan from the beginning, but I only recently started a collection of plushes. I know, I know, I have so much catching up to do x__x;;

But it's okay! I've been able to find quite a few awesome plushes and found out fairly early about the bootleg issue, so as far as I know, my collection is legit. I'm hoping I can find some of the Pokemon on my hunt list and fill in my plushie Pokedex a little more. So, here is a link to my wants list post, and I'll post pictures of my collection so far in a cut. 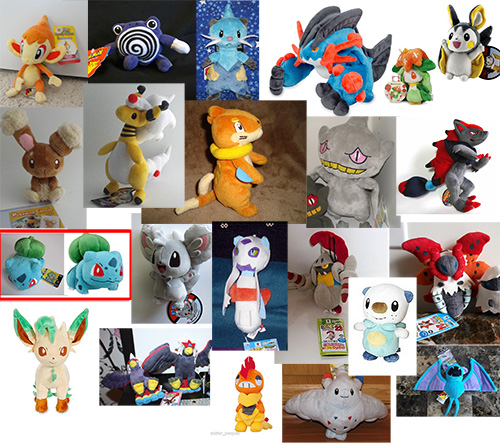 Thanks for reading guys!
- Natalie

Hello, everyone! As some if you may know, I mainly collect plush and cards of the eeveelutions, but I also have side collections of the cards of other pokemon I like, which I am showing today! If you feel like looking at my never-before-seen side collection, open the cut~
Or if you just want to trade cards, you can skip the cut~
Or you can completely skip over this post if you aren't interested in cards haha (^w^)

( Collapse )
I recently splurged on some TCG, so I have a bunch more cards up for trade/sale, including full art M Gallade EX, full art Battle Reporter, Dialga EX, Aggron EX, Noivern Break, etc that I pulled. They are listed at the end of my Card Trades (and sales) post. I would rather not buy cards now because I am saving up for the upcoming eeveelu merch, but feel free to contact me if you want to trade! (^o^) 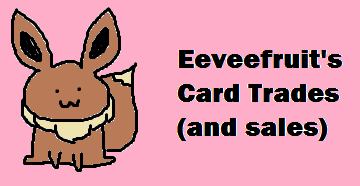 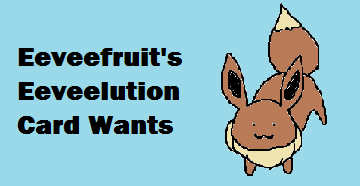 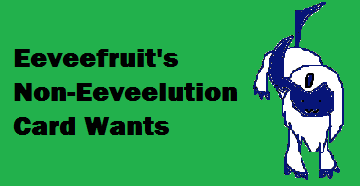 There's a big snowstorm coming to my area so it might be a few days until I can mail things,just as a heads up. I have also added three items to my sales: 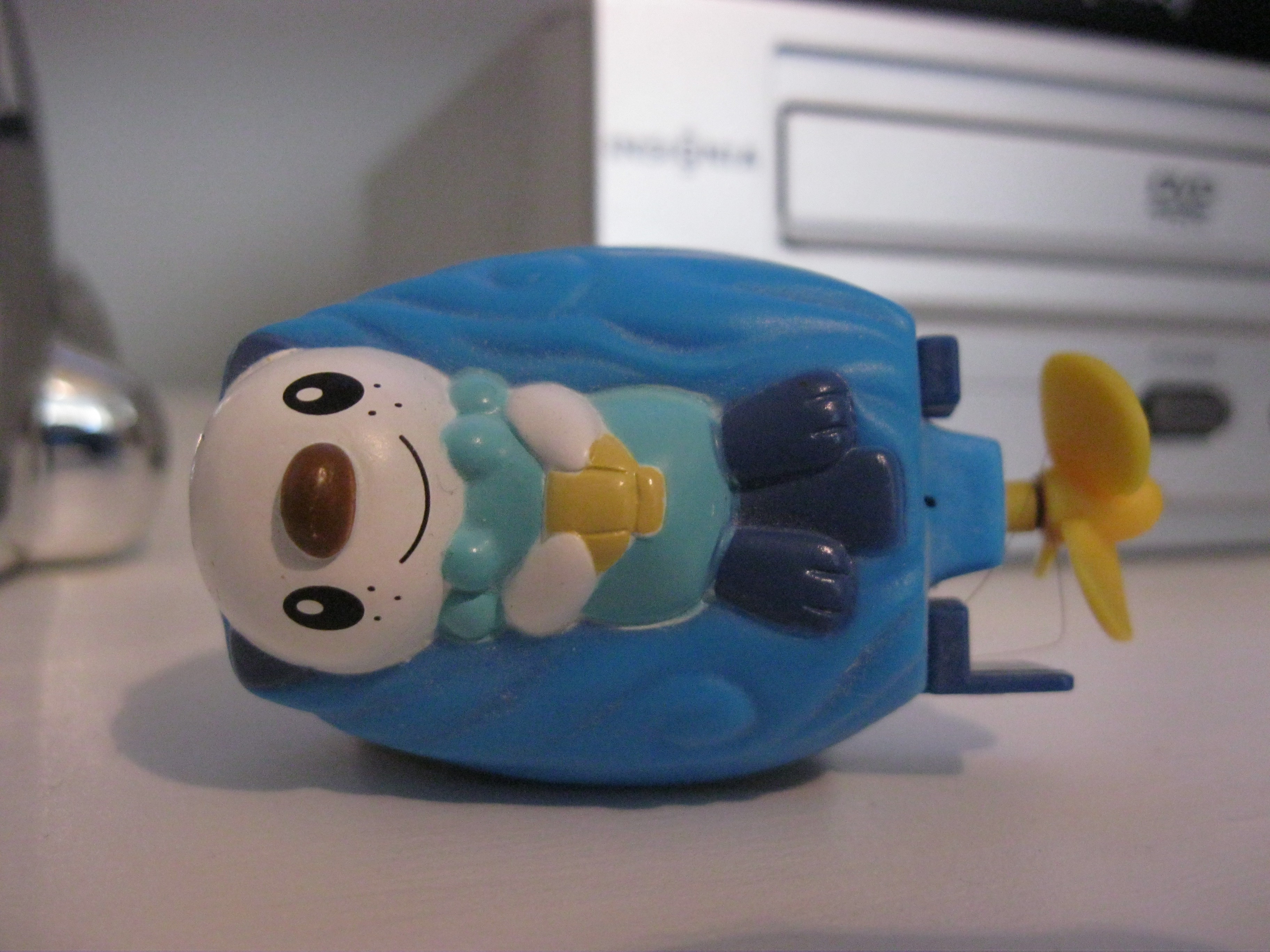 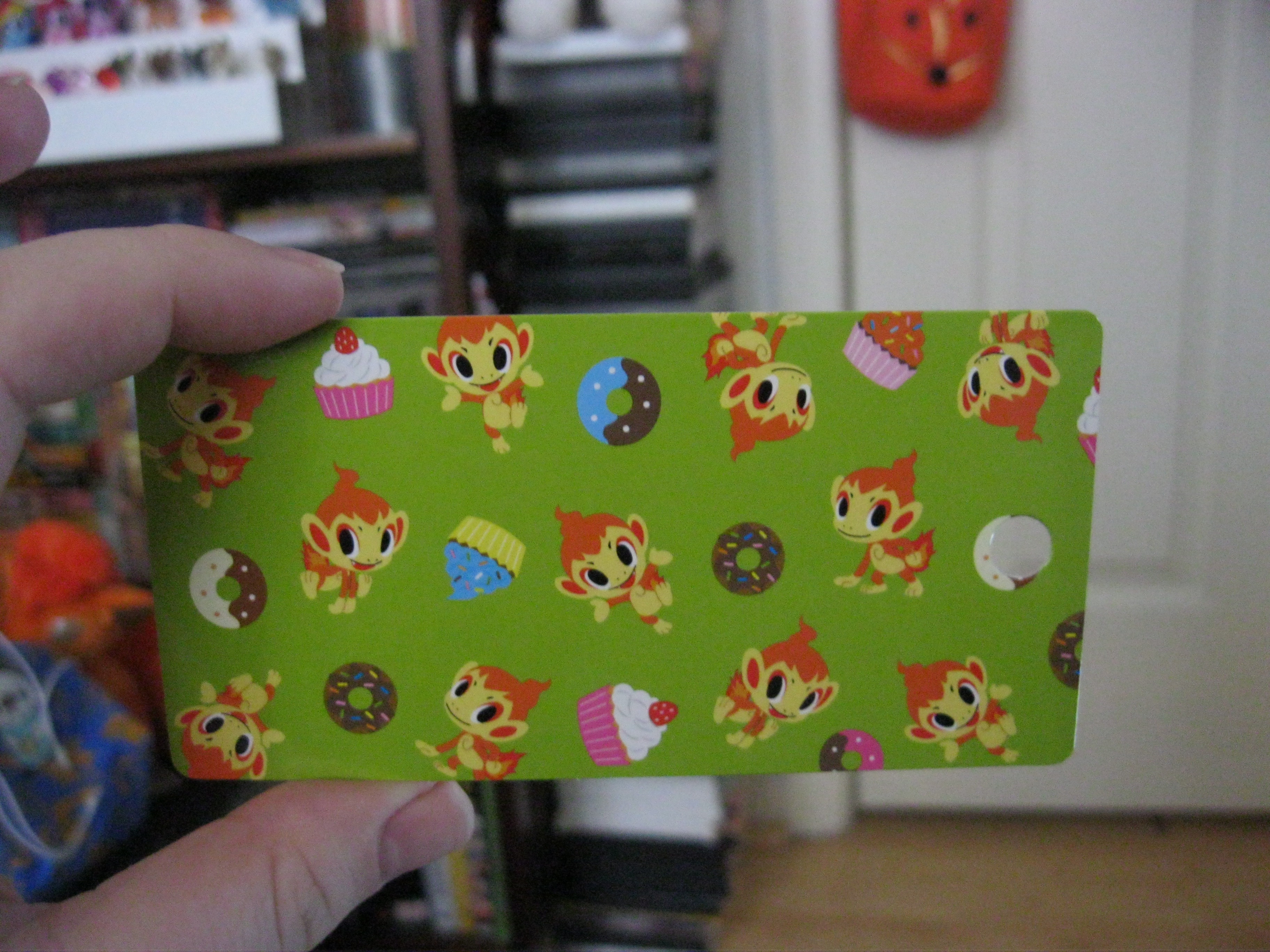 Have a good weekend and stay safe if you are affected by this storm too! 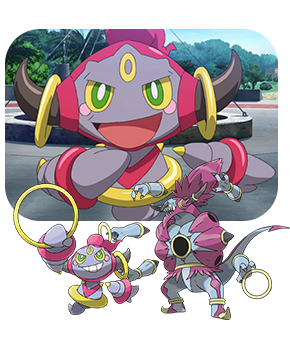 As I've been away from posting for about a year I figured a reintroduction would be in order.
I've still been lurking every once in a while and still let my collection grow a bit but just a lot more slowly as my work just takes up a lot of my time.

So I'm Amanda, 28 and from Belgium. I live with my 4 dachshunds and a cat that appearently adopted me.
Being a tattoo artist keeps me busy on a daily basis and I love to play games, watch movies/series, do some sports shooting and collect things in my spare time.

My collection consists 98% out of Plushies with some random more usefull pokemon things I use on a daily basis in the mix (phone cover, tshirt that sort of things)
As for favorite pokemon the list is sorta long but consists of mainly the fire foxxes: Vulpix, Ninetales and Fennekin; cute horses: Keldeo, Blitzle and Ponyta; my great weakness for t-rexxes: Tyrunt and Tyrantrum and then all sorts of pokemons I find super cute and hard to resist.

I've been trying to focus it a bit more on the favorites and not pick up many outside of that and I'll continue to do so as it seems to make me happier to have a whole bunch of the same type together, what do you guys feel is more fun to own?

A little preview of my collection, more under the cut!

I hope you all enjoyed my post and that I'll continue to have a great time reading everyone elses posts here!

Hey guys! Hope everyone is staying warm. More of my All-Star plush came in the mail. Yay!

I still have pokemon that need new homes. Check out my sales, lots of great stuff! Click the banner. Thanks!

Happy Friday everyone! I have lowered some prices in my sales. There are tons of items still available!!! Here's a little preview of the items I have for sale, there is TONS MORE NOT SHOWN HERE:

*Please click on either the preview picture or sales banner blow to be transported to the original sales post!*

I am also open to partial trade or trade for items in my wants list: http://aki199257.livejournal.com/1222.html

Thank you for looking! Hope everyone have a great weekend!!

Wow! It's been awhile since I posted here. ^^; I'm finally back to collecting and have been updating my Tumblr - Risha's House of Cards. For 2016, I'm doing a 366 Pokemon Cards a Day Project where I'm going through the Pokedex and sharing Pokemon lines that I collect cards of each day. :D I'm still catching up since I was 3 weeks behind when I actually started. ^^;

And now some wants:

Is anyone selling or trading the Poncho Pika cards or figures? 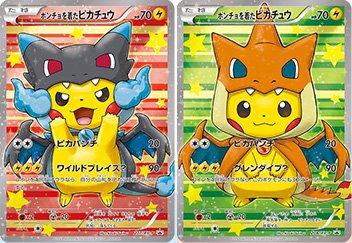 I'm still looking for Houndoom EX, FA, and Spirit Link cards in Italian, Spanish, German, and possibly French. French and German are kind of on hold since I'm getting booster packs for those. Also, I need Houndoom FA and Mega Houndoom EX and FA in Korean.

Also looking for this card from XY9 -

And, I'm looking for an English 2015 McDonald's Pikachu card if anyone has one to trade. I'll need to check which duplicate McD cards I have left if anyone is interested in trading.

And, older wants, I'm still looking for a Japanese Reviving Legends L3 Reverse/Mirror Holo Houndoom card, Topps Foil Houndour and Houndour sticker cards, and any of the Eeveelution cards from the French McDonald's set that released with Dark Explorers cards.

I am considering doing a Group Buy for some Mew Mythical Pokemon Collection boxes. If anyone is interested in just the Mew promo card and/or pin, please let me know and I'll set up the GB if there's enough interest. I would be claiming the 2 Generations booster packs.

I will be doing a Breakpoint bosoter box opening when the set releases early February. If you are interested in any cards and would like me to let you know if I pull extras of them from my box, please let me know.

One of each of these -

After much deliberation, I've decided to do some major collection weeding. 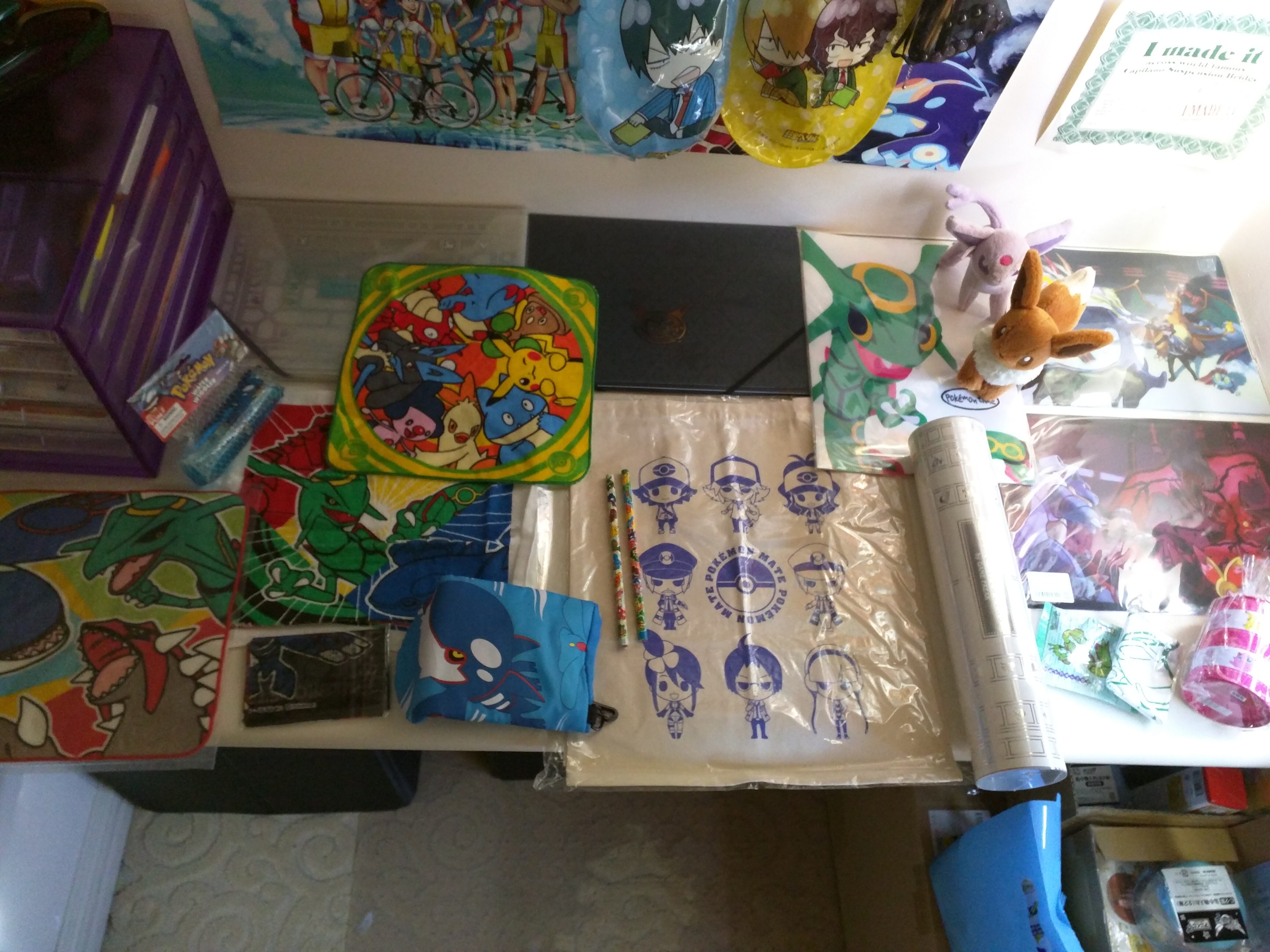 Sales Permission granted by entirelycliched on April 2, 2012
Feedback here
Prices in USD
Payment via Paypal
Shipping from AUSTRALIA, and will start from $3 to the States/Canada. Feel free to ask for shipping quotes, but commited buyers will override people who've asked for quotes!

Hello all! It's been ages since I last posted. I'm posting a collection update today, but first I think I probably need to reintroduce myself! I'm zangooseel and I've been a member here for about five and a half years. I collect Buizel, Zangoose, the Oshawott line, the Seel line, and the Spheal line, along with cute things here and there that strike my fancy. :)  I'm only posting a Buizel collection update today, though.

I've also got photos to share from a trip I took to Japan a few months ago, featuring my Buizel Pokedoll, Buoy.

Last October I went joined a tour in Japan for two weeks! Of course I brought Buoy with me. I've taken his picture on plenty of other trips over the years, including at Mt Rushmore and at various national parks. This was my first time to go overseas, so I was very excited (and nervous)! 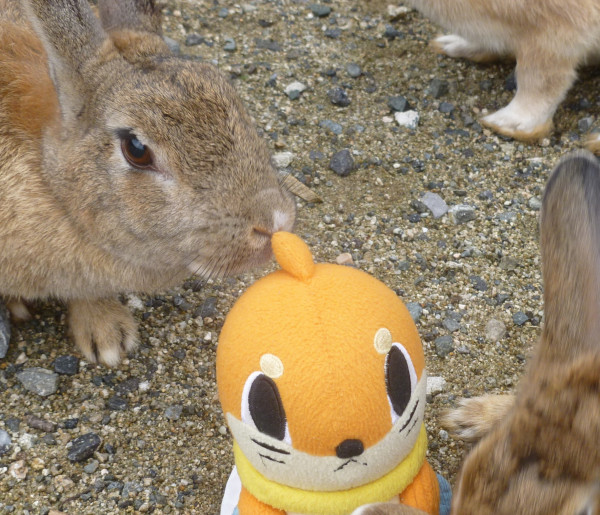 I hope to be able to post an update from my Zangoose and seals collections sometime soon, because I've added to them since my last post. I do hope that you enjoyed these pictures. It's been a lot of fun collecting Buizel items over the years. It you have Buizel items, please feel free to share a picture with me! I love to see other Buizel collections. :)

While I have your attention, I do have a want!

These patterns come with each Pokemon Time figure strap. I got 3 Buizel straps but didn't get the Buizel pattern. (I have to say, Budew's is SO CUTE). Does anyone have a Buizel that they would be willing to sell? Happy new year to all of you! Hoping that next year will bring us a lot of awesome goodies.
The main reason of this post is that I recently acchieved sales permission and am thus having some small sales.

Thanks for looking! And remember pictures of the zukans and kids can be seen bigger if you open the link.
PS Negotiable

These are the last Shinx items I need, their just harder to get because they're blind packaged ;___;

Also, I wanted some more info on this item. More info follows under the cut:

Thanks for reading, good night guys~

I have a handful of the large size I Love Mew plush available for sale -- they are in hand and ready to ship :D

You can purchase them directly from my webstore here ☆


Thanks everyone, happy collecting! (・ω・)ノ♡

Hi all, Just wanted to share a couple of things. First off just making a post regarding my sales incase there is any interest:

Next I wanted to spread word about a video game tournament taking place called the Mid-season Showdown. The tournament will be held at the APA Hotel Woodbridge in Iselin New Jersey on March 20.  Championship Points are on the line for an invite to the World Championships so this should be a pretty fierce event! In addition we will be running a Pokken side tournament (just 2 days after it's released!!). Both tournaments will have a live stream on http://www.twitch.tv/libertygarden. I'll be there commentating the Showdown so feel free to say hi! It would be cool to meet more members of this awesome community.

Lastly we will be having two vendors onsite (Whale Sales, Jinx Collectibles), both will be selling exclusive Pokemon goods straight from Japan! I have included links below for everything.

Hope to see you all there!

Anyone have experience ordering from their website? Hoe long does the free shipping option take to be delivered? Aulity issues? Just wondering becausebi ordered Yvetal and Xerneas Pokedolls and an Arceus plush.

Alos. I ordered a bunch if new sguff i ahouldnt have... Including both Zygarde form plush, and another set of deoxys pokedolls.
Collapse