Hello Comm Members!
It is that time of year again when I'm opening up claims for cards for the latest TCG set! I have a few boxes incoming, so if you are hesitant on getting a claim(s) please be sure to place it sooner than later! As per the norm, first come, first served!

This set is reminiscent of Shiny Collection from years past. Like that set, every card in this one is holographic. There are many cute designs, including a new "charm" system on the side of the borders. There are many cute and cuddly cards in this set, so you definitely don't want to miss out!

Also: Keep your eyes peeled! Later this week I'll be posting a giant sales post of older Japanese cards from Vending & E-Series to the Japanese Card Emporium (will post later!)

Have a great week all!

A special thanks to

collectorviper on twitter for covering this news story, and Chikuwa_V for the leaks!

My auction ends in less than 24 hours.  There are plenty of kids with their starting bid. 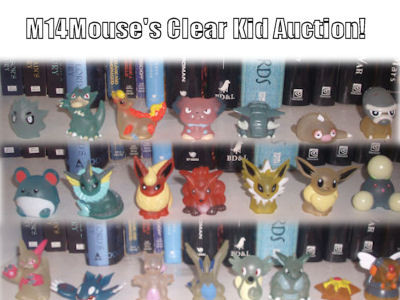 Hey everyone, ending in just a couple days now, reminding that I've got a big eBay lot looking for a new home here! Or click the pic to go~ 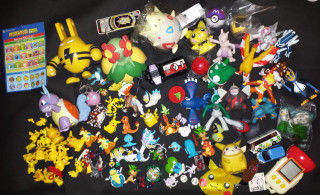 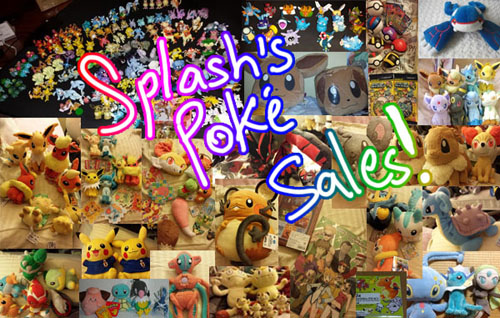 Does anyone here collect Xerneas? I just wanted to see what your collections looked like and hear your opinions about Xerneas plush and figures. Thanks :)

Hello folks! Hope you all are well.

My auctions end today in a few hours! Don't miss your chance at these exclusive Banpresto figures! =3 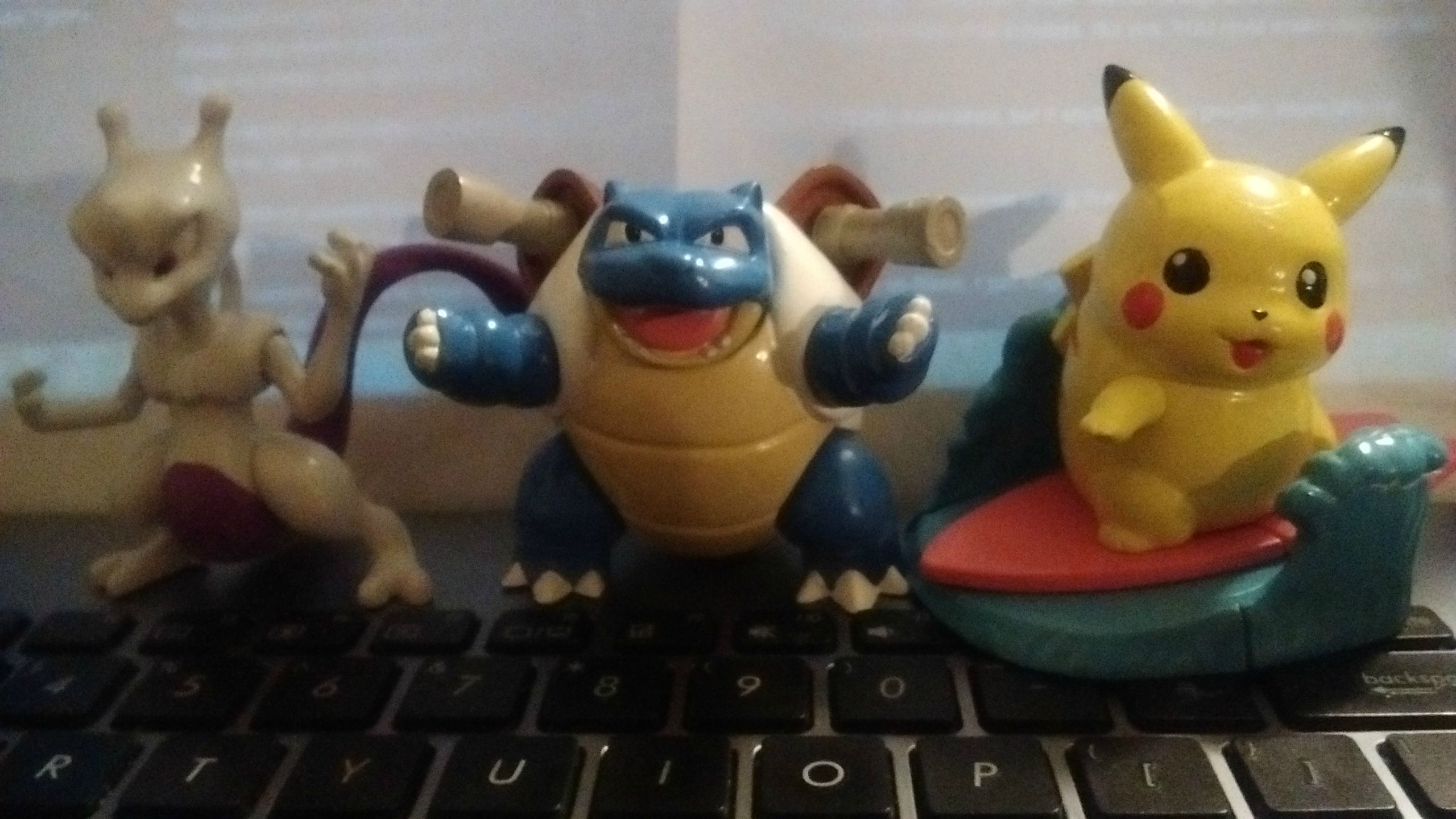 Also, I have a small want. And I need it asap for a project or else I might have to make it myself ^^;

Does anyone have the tail to the large ~10 inch Japanese TOMY Electronic Talking Lucario figure? I got one a while ago, but he was very used and did not come with his tail. He looks like this (photos not mine, they're from an long-over eBay listing): 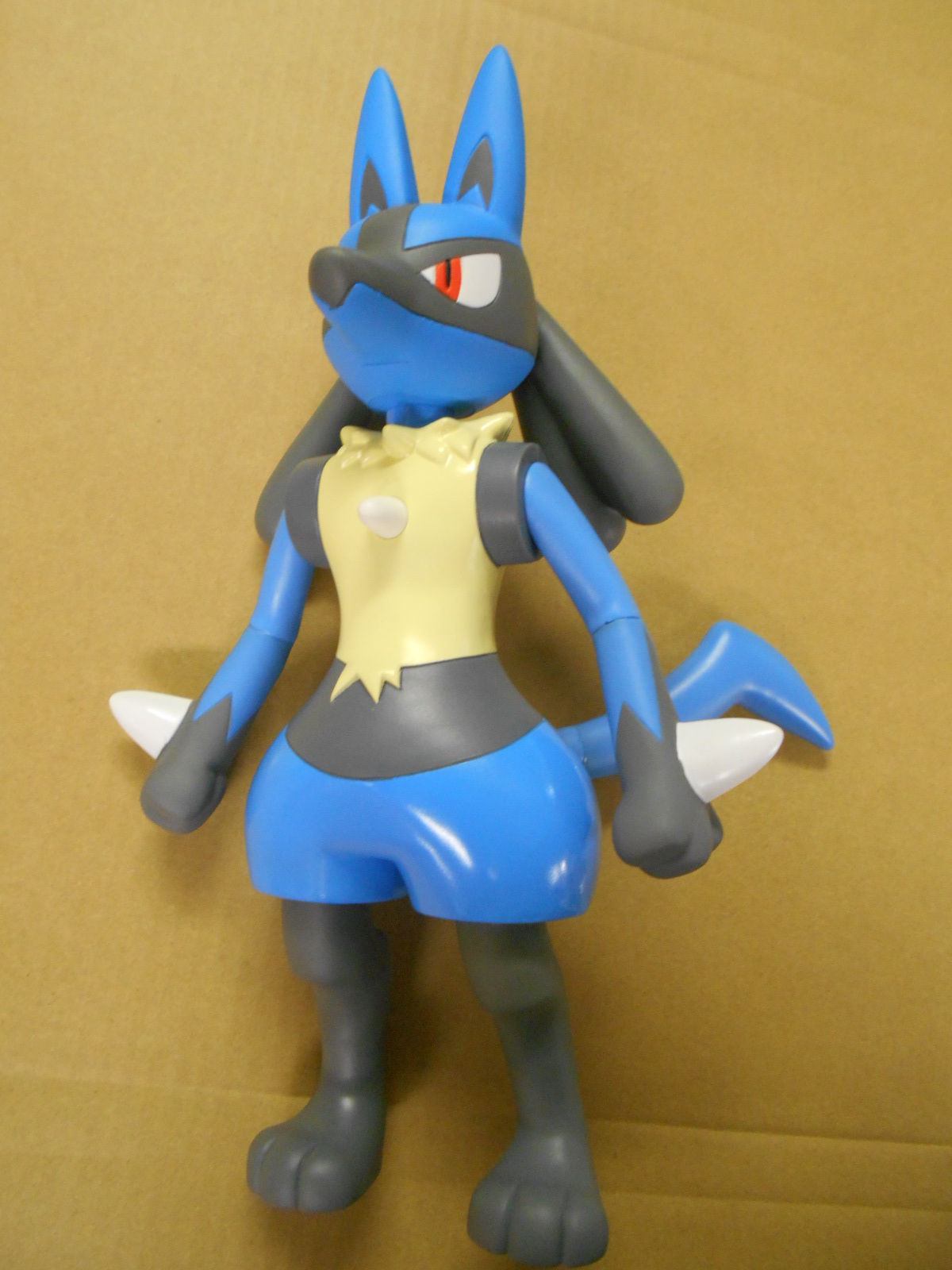 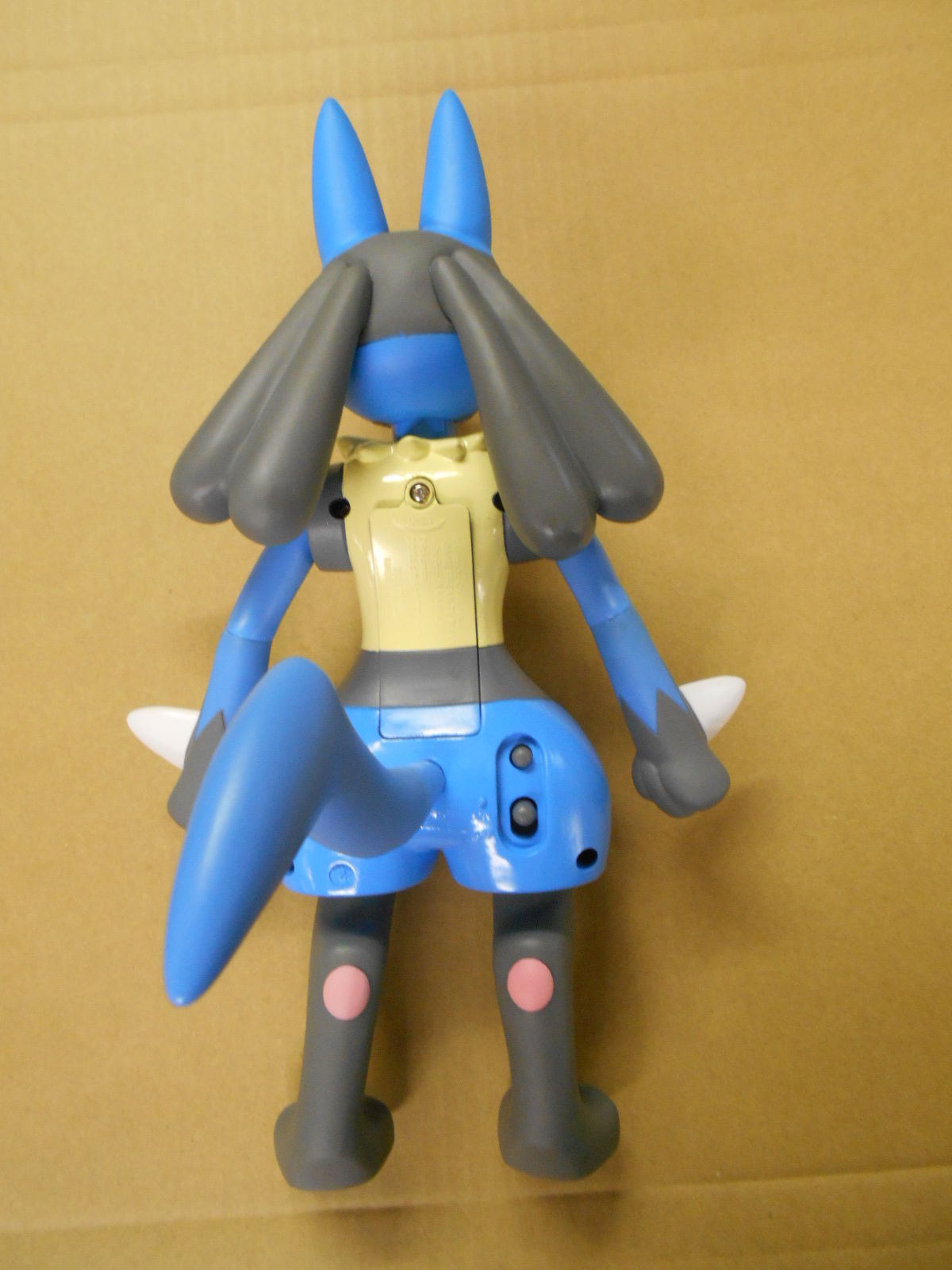 Thanks to anyone willing to help! <3

I have this green charmander and I think they made 2-3 other colors, wondering if anyone has them. Im thinking red blue and MAYBE yellow but I'm leaning towards probably just red and blue. But im open to all variants that exist lol.

If you have them let me know what your price is!

I finally got around to taking pictures and figuring out Weebly!!!

So, without further ado, here is the link to my collection site!

Any opinions are appreciated!!!
If anyone would like to link our collection sites, let me know!!! :)

Hello fellow Collectors! Since this search is proving to be a little more cumbersome than anticipated, I figured I would turn here for a solution. No luck with the official site re-stocking, and the local Toys 'R' Us doesn't seem to have him either.

I am looking for a Pokemon Center Plush of Mega Sceptile to add to my other Mega Dragons. ;D

As close to new MWT as possible, though US would be a little more preffered since I'm not willing to pay more than around $25 usd. If you do however, happen to have one with a Japanese tag I won't be terribly opposed either; being able to haggle a bit would be great!
I'll be able to pay starting the 28th the morning after my direct deposit goes through, as a heads upiate Payment will be immediate after discussing price! I also see the store re-stocked Mega Swampert and Diancie, no Sceptile yet.  Still keeping fingers crossed over the next few days...

To make this post somewhat more interesting, here's a preview shot of someone who likes my lamp post:
( Collapse )

Hello everyone, I hope everyone is having a good week so far. 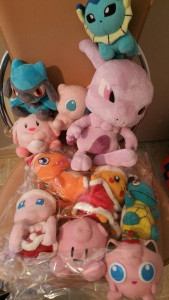 My sales permission was granted on December 1st,2013 by entirelycliched

My feedback: http://feedback.pkmncollectors.net/feedback/view/ferix8/
I ship from Canada and, for one 6" plush, price starts at $7 to the U.S. (shipping to Canada is more)
No holds. First to commit gets the item
No haggle/trades at this time.
Prices are in USD and do not include shipping fee/paypal fee
I am not responsible for damaged/lost plushiesonce I ship them out. Insurance/tracking is extra
Let me know if you have any questions.

[Close up pics plus more plushies!] 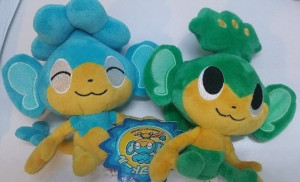 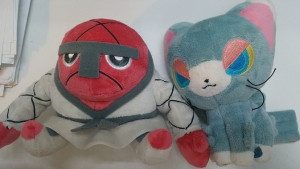 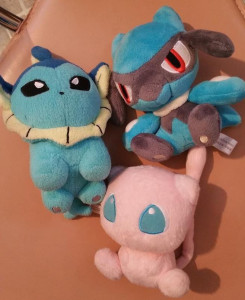 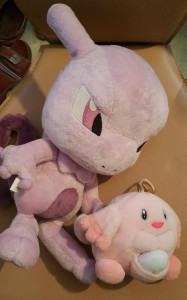 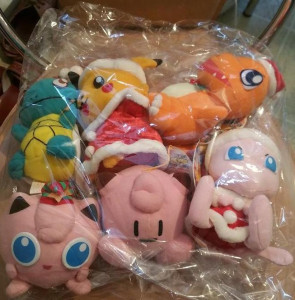 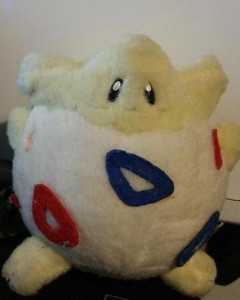 Let me know if you have any questions.

Hey everyone! I have some more items up for sale today! Please check them out! :D

Sales permission granted by areica96 on 1/08/15, and here is my feedback: http://feedback.pkmncollectors.net/feedback/view/miss_minccino/
( Collapse )

So lately I've gained an interest in stickers, after getting a few in the mail, so now I've got to ask:

If any of you guys have some for sale, could you link me? :)

Hey guys! As the title says, I am looking for these figures. Only one other seller on here has ones I need but I would still be short figures. If you guys have any extra ones (good condition and have base) please let me know! I have plenty of items I can trade, or I can just buy them straight from you. I would prefer to buy as many as possible from one person to save on shipping.

I need from the Waku Waku Get:

And I need these from the Chibi Kyun Chara figures:

All shown above as well as Vaporeon.

I appreciate in advance your help in obtaining these figures for my collection. =3

The auctions are over, feel free to make offers on the leftovers if there's anything you're interested in! :>

Doing some collection weeding because I just don't have the space to display these wonderful figures anymore. ; O ;

Have a teaser pic (there's much more under the cut)! 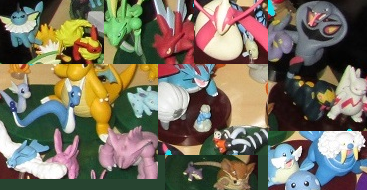 - Sales permission granted by denkimouse somewhere in 2008-2009
- For Pkmncollectors members only, obviously!
- I can only accept Paypal instant payments for now - no eChecks whatsoever.
- No holds - please be sure you have the money if you decide to bid!
- I ship from Finland, so the if the Zukan set you buy is bigger than 2cm (most of them are), the shipping cost to the US is 11€ by default (slightly cheaper to most EU countries I believe), or 22€ with tracking. But yeah, this is something to keep in mind especially if you wish to buy the cheaper sets.
- For straight sales; please specify if you're committed to the purchase or not! If you're only asking about the price and someone else comes after you and commits right away, they will get the item.
- Auctions end on February 3rd 2016, 8PM (Finland time). Countdown timer here! Standard snipe prevention rules are in effect,
- Please place your bids in the correct threads created by me, and always reply to the high bidder if there's one!
- I'm probably forgetting about a lot of stuff - please do ask if there's something you'd like to know!

I'm looking for someone who owns a Natu/Xatu Time Clear File. I need a high resolution image to make business cards out of the pattern. Google was no help and I'm not in the position to spend $34 on one at the moment.

Thanks! Fun get to come on the next post :3

Happy new year, everyone! I haven't posted in awhile, and
I got some neat little gets I haven't had time to show off, so here we go!

First off, I had never bought an Amiibo before and didn't even own a WiiU or new 3DS, but when the Mewtwo Amiibo went on sale in November I knew I had to get one! So I showed up at Toys R Us almost an hour before it opened, made some friends, and brought back more than I had intended...


I also got Poke Puffs from a local bakery called Black Velvet Bake Shop! These ones are for humans, but Pokémon can’t seem to keep their paws off them! My Latias Pokedoll loved it! (It's basically like a cake pop dipped in white chocolate! I just ate one tonight, sooo good!)

Lastly, the news - I was just thinking about the JapanLA Pokemon boutique from last year, and it turns out they are going to be releasing a whole new line of Pokemon stuff, and will be doing a launch party on February 27, Pokemon's 20th anniversary!

Click here for more info! Is anyone planning on going?


And of course, here's a plug for my Sales! Among other things, I have a super cute official Pokemon Valentine's day card that can be shipped to arrive in time!

A got a HUGE box in the mail today. You can probably guess what was inside.... 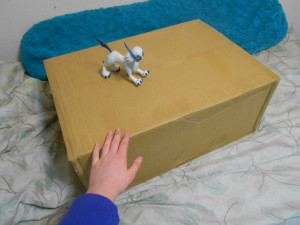 ( Collapse )
( Collapse )I thought I'd post my wants list before SSS starts anyway and see if anyone is selling some of the more rare things on here. (Some of the more easily obtainable things I may not be interested in buying at the moment). Please take a look! 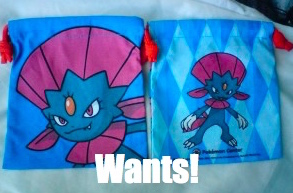 I've also decided to revamp my collection site, which hasn't been used or updated in quite some time now. It's nowhere near done yet, but I still couldn't wait to drop a little link :> I'll make a real post about it once it's finished.
Finally, please check out my old sales post here. Pretty much everything is still available!

Hope you're all doing well! I've tried to be a little more active lately. Even if I don't comment, I still love seeing everyone's updated, and talking a bit even if I'm slow to reply. :)
Collapse