I write for the Ace of Geeks and I managed to get a pretty cool scoop.

We got exclusive pics of the Toys R Us promotional items, and we also found out that there's going to be two extra promo cards featuring Meowth and Clefairy! (On top of the already announced Pikachu and Magikarp).

Thanks for checking it out!

Hello all! I have finally decided to post as I have been checking LJ constantly for two days. Has anyone heard from tdotakichan at all? I tried to commit to some items in their shop as they posted sales a few days ago but now its been well over 24 hours and I have heard nothing back from them. I've done business before with tdotakichan and they were always pretty quick to respond so it has hot me worried. Perhaps their having trouble posting? Anyway I hope someone might know, I'll delete this post if it is not allowed, not wanted on the page or this is sorted out! Thank you everyone for your cooperation!

Hey Everyone! It has been a really long time since I last posted in the community (almost three months D:) but I recently returned home from Tokyo and wanted to share a few of the items I got from various Pokemon Centers!

*Warning, this post is extremely picture heavy! Pictures are under the cut c:
*Edit: I used spoilers instead since cuts aren't co-operating with me for some odd reason. 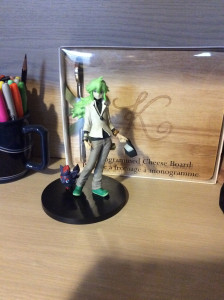 I came across this in Akihabara in a second hand store and got it for only 1500 Yen! Really lucky find c:


Various goodies! The two large cards pictured with the Charizard hankercheif were apart of a raffle draw at the Mega Tokyo Pokemon Center!


I also bought many Pokekyun booster packs as well as the Pokekyun TCG box and card binder! Also, the wrapper pictures beside the Sylveon phone jack was for a bath bomb, and within the bath bomb was one of three water type Pokemon (Mudkip, Psyduck, Piplup), or goommy or Pikachu. I ended up getting Piplup c: I took a picture of my two favourite pulls as well c:


The remainder of my gets will be included in a "gets" post that is long over due. Thanks for looking! c:

Hi again everyone! I've added a couple of items to my (now very small) inventory, so please take a look if you'd like!

This is kind of a hard decision to make but as I don't have anywhere to properly display this one, I have decided to place it up for auction. This is a 1:1 laying pikachu from the 2010 Rainbow Collection promotion from the Pokemon Center. This was only available in Japan. It was only used for display and has all tags still attached. The hangtag has a bit of a crease in it(shown below) but has no other wear. Plush is in excellent condition,no stains rips or matting.

Talking about potential meetups...well why not take the Tauros by the horns and make one myself? The dates I'm thinking of right now are either April 9th or April 16th, both Saturdays. This'll give people time to make plans and to recover from Sakura Con. How does this sound to everyone? Say which dates you'd prefer or if a different one would be better.

I was thinking we could meet at the Pioneer Mall food court and bring some of our choice items to trade or sell. If we end up having to go offsite for that, Pioneer Courthouse Square is a mere block from there. Both are right on the MAX line, the red, blue, and yellow lines with more nearby.

If we wanted to travel together, the Saturday Market will be open again by that point and that's just a few blocks away, as is Powell's Books (you can find some rare Pokémon books there--I found a DP piano book of all things!). Plus, you know, the rest of the mall.

Let me know how all of this sounds, and give your feedback about any preferences you may have.

So im on the hunt for the last couple pieces for my collection.

Was the Kyurem pokecen plush released? I havent seen anyone who had him. I havent seen any sell either. Id rather just get him than try and hunt down the two forms pokedolls. I like having the main forms of pokemon.

If you have one post pics please! And if youre willing to part with it give me a price.

Hey all! Just posting a reminder for my sales post. If anyone wants feedback, let me know! Click the banner or this link to go the sales post! 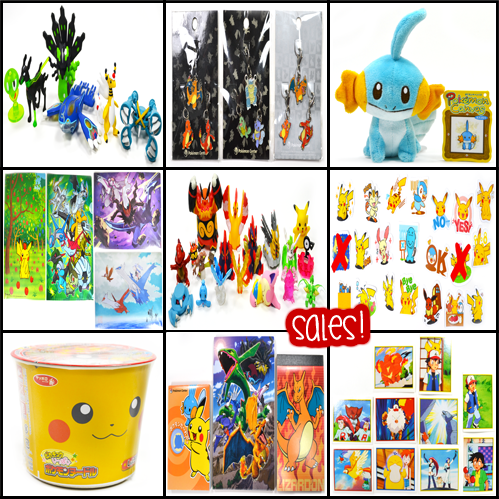 Hello! My name is Dakota, and I've been a Pokemon collector for about 18 years! My favorite Pokemon are Spinda, Breloom, and Snorlax (which I love collecting!) and my favorite region is Hoenn! I'm hoping to be able to post a picture of my collection soon, but for now I'm excited to be a part of this community! ;v;

I was just on tumblr & saw this post that had this pillow! (picture can be taken down if requested, of course!)

Hopefully I'm not too late! So my question Is if anyone doing pickups for this pillow? I'd love to get a quote & see if it's in my price range ;w;

Got your tax dollars in? Looking for a perfect spring swap gift? Want to just treat yourself?
Please check out my shop!
Pkmncollectors secret code for 10% off: spring
Prices recently lowered, and weeded items from my collection added :)

While doing my usual cleaning after a move i found something in the depths of my boxes that may be of interest to you. 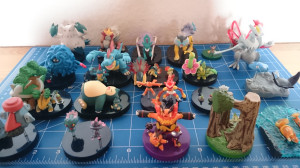 Hi everyone :) I haven't posted in a long time, but now that I have a job, I am able to start collecting again. I am still in search of a specific Mudkip plush, this one I have been looking for a few years now and is my ultimate grail. If anyone knows where I can find one or would be willing to sell me one, pm me or comment below, thanks :)

(I believe this is the 2003 DX Banpresto runnin' Mudkip)

Hey guys, hope everyone of you got spend their weekends in a nice way. :)
Just wanted to give a heads up that there's a few things in my shop, which might interest some of you. 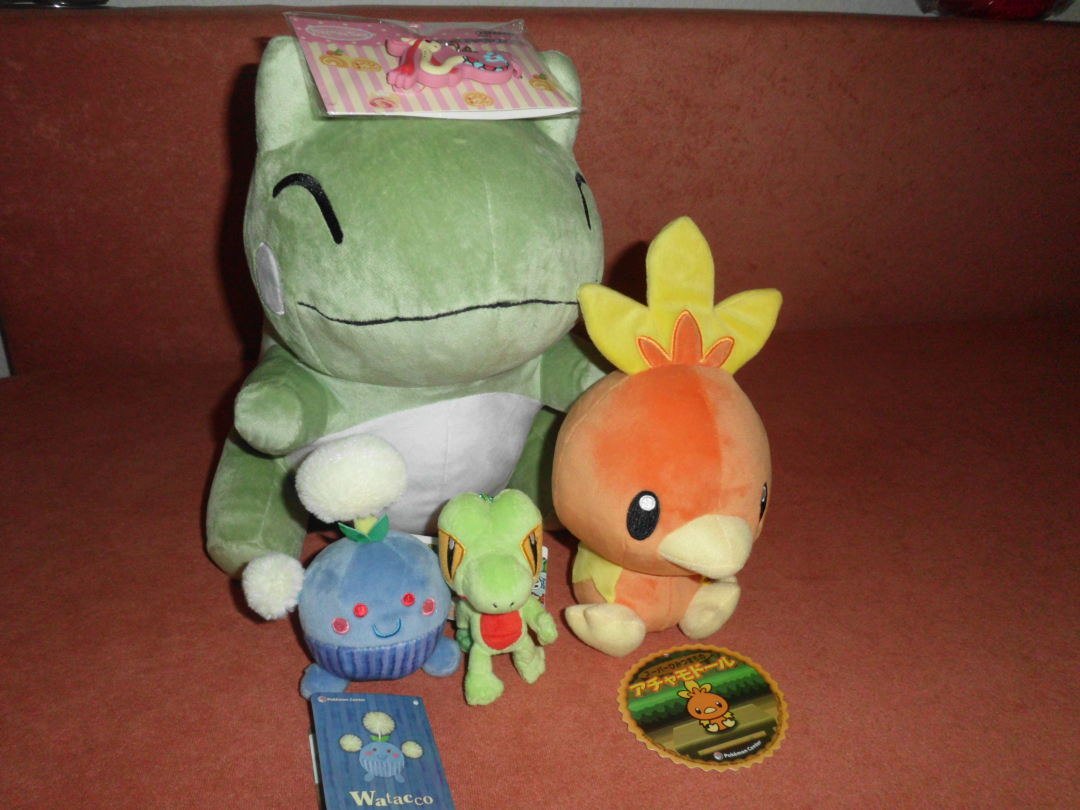 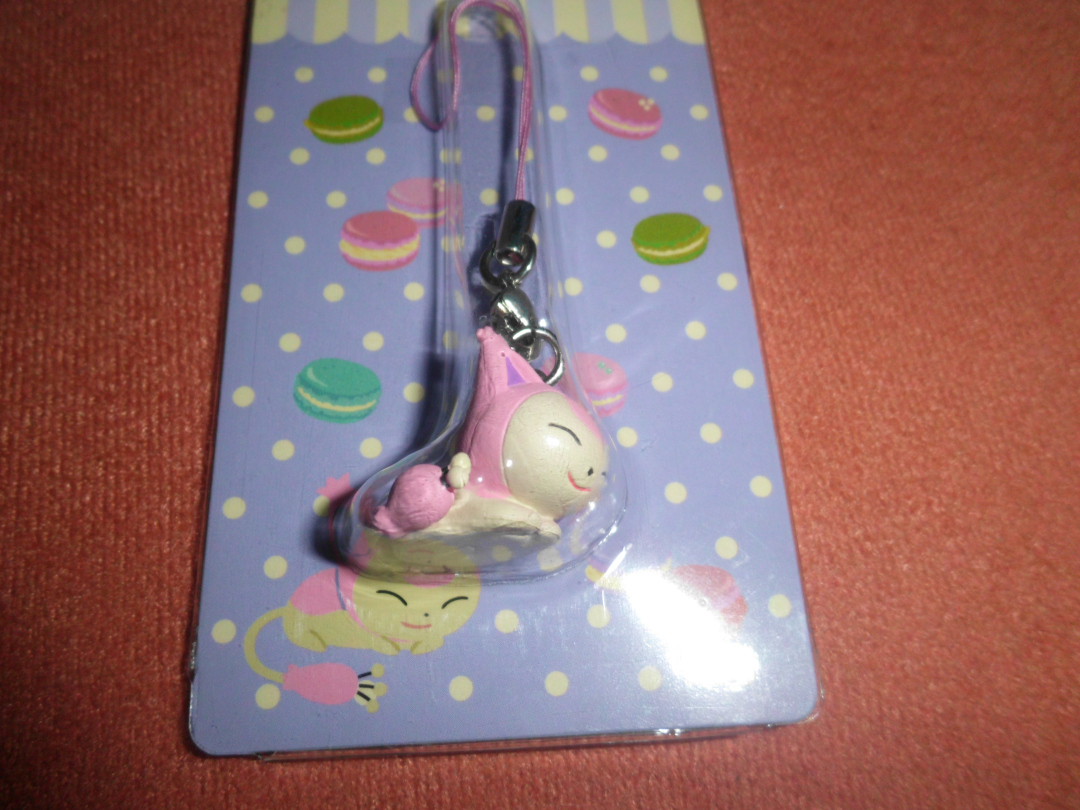 Also I took some time to weed out my PokeTime collection and found i have this MIB Skitty PokeTime phone strap,
but since I got some other merch of her I wondered if someone was up for a trade?
I'd like to trade her for either the Swablu or Milotic figure phone strap from the same year. If anyone's interested please let me know.^^

Off to another great week, see ya around!

Hi, guys. I am going to the Pokemon Center in Nagoya for Pokemon Day on the 27th! I still don't know if they are actually having an event...haven't seen anything yet >_< But I am going!!

I am going to do a few pick ups; however, I will not pick up anymore Life Size Starters. I been asked already to pick up a few so I can't carry anymore. I will pick up smaller items and small plush.

Feedback :http://feedback.pkmncollectors.net/feedback/view/gaarasyami/
Prices are in USD. I accept paypal.
Please pay in 24 hours.
Please let me know if you want tracking added. Insurance cannot be added to airmail. You have to pay for EMS express shipping to get tracking and insurance.
I will ship within 3-5 days of payment. I will have to ship on the weekend because of my work hours.
Prices stated do not include shipping. Please ask for a shipping quote.
Shipping is from Japan. I will ship international!
You can combine orders from my sales too http://gaarasyami.livejournal.com/37398.html

Please let me know when you have received the item and leave me feedback here: http://feedback.pkmncollectors.net/feedback/view/gaarasyami/
A list of prices and items can be found here: http://gaarasyami.livejournal.com/38708.html

Hi everyone, just a quick update on my little sales and a reminder of my lots on ebay ending really soon =)

As I said in my last post I'm having a big move in less than a month so I won't be able to keep any of these stuff, so just hoping to give these items new loving homes. What I mean is that I accept haggling, but please keep it within reason ^^

( Collapse )
Sneak peeks of the lots! Click the images to go! (I have other Pokemon stuff on there so you can check it out too) 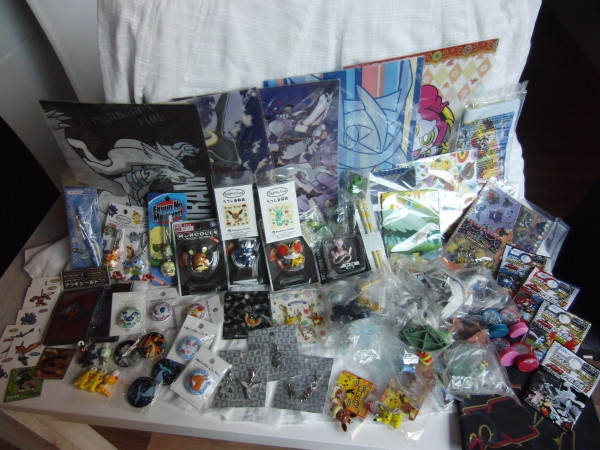 Thank you for your time, any questions feel free to ask =)
Collapse