I have a question in regards to some Hasbro plush, namely what are actually Hasbro treat keeper plush?
Do they have little pockets inside of them or something? I've looked for pictures of the so-called Charizard treat keeper plush but I couldn't find any with pockets.

I was looking for a Poliwhirl Hasbro beanie plush online and then found out that apparently, there is also a Poliwhirl treat keeper plush. Now I am not sure which one this could be

It looks like the Hasbro beanie but also somehow different? It appears as though its arms and feet are shorter or something?

Can someone please help me, that would be so nice <3

Hello. Just a reminder that I have a few more slots open for my March 22nd.

Please check out prices and items here: http://gaarasyami.livejournal.com/38708.html If you do not see something you are interested in on my list please fill free to ask me about it.

This is commitment style so you will pay after I have them in hand.

::Conditions::
-I ship from Japan. I will ship international!!
-Please express clear commitment to secure a slot.
-I can also combine items with items from my own personal sales http://gaarasyami.livejournal.com/37398.html
-Please pay for items quickly after I send you the final quote (24 hours).
-Prices are in USD. I accept paypal.
-I will ship within 3-5 days of payment. I will have to ship on the weekend because of my work hours.
-Prices stated do not include shipping. Please ask for a shipping quote.

Hey guys! I have some exciting things to share, including first and foremost - my SSS! 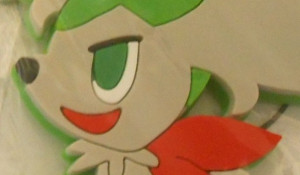 ( Collapse )
Thank you so much for everything Classypersian <3 This year's SSS was so much fun, and I love my gifts!

I thought I'd also share a few recent gets!

( Collapse )
Lastly, I wanted to unveil my brand new collection site! My old one is still up, but since I've shifted my collecting focus, I decided I wanted to do something new. I suppose it's still not totally completed - I have a lot of other items here and there that I haven't yet added - but the important parts are done at least.

I would love to add comm members affiliates! Here's my affiliate page with a code for my button. Comment here and I'll add yours as well. I'd love to connect with any and all collection pages!

I hope to add everything while I'm at work today, but if I can't, I'll be completing it within the next week - I'll be going on vacation soon.
Thanks for reading :)

Hello everyone! I just got back from the Pokemon event at Target. I picked up some goodies!

Thanks for reading! I think I'm suffering from newbie syndrome, because I've spent a TON of money on new stuff since I've become a member. I will post pictures of everything soon :D Did anyone else go to the Target event today?

Mail day I got my first snorlax pokedoll and I am obsessed with it :) and am also lokking to expand my collection so if you guys have any snorlax or munchlax items please let me know :) 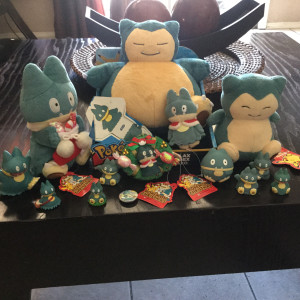 Is anyone doing pick ups for the kyoto exclusive ho-oh pin badge please? Or does anyone have one for sale? Need that beautiful pin in my life!

Just wanted to share my goodies from Pokemon Day at Target :3

So, obviously, there's the pikachu visor and Shiny Magikarp Promo, BUT I got some awesome other stuff :3

First off, there was a stand with Pikachu Kuttaris next to where they were giving out the visors and cards. I really generally dislike pikachu, but he was so cute, I had to pick him up ;-;
Then, as I was walking away, a Nintendo Representative stopped me and pulled me over to a second table about ten feet from the first. He handed me an ORAS Hoen region poster, and the Pokken/RBY cards you see there, and asked me about how long I'd been into pokemon. So, we talked for a few minutes, and i showed hom my collection, which prompted him to go into his bag and pull out one of the Torchic Keychains target gave away when ORAS came out, and he gave it to me! :D
He then told me to stay posted because there will be "Lots of fun new pokemon to collect this year", and even mentioned the release of Sun and Moon! :D
So geeked! :D

Hey everyone, so I went to Target this morning for their Pokemon Day event! I nabbed the shiny Magikarp card and Pikachu visor, but like many others, I was surprised to see a bunch of Pikachu Kuttari Cuties, so I decided to pick one of those up as well!

( Collapse )
So yeah, that's about it for now! Happy continued celebrations of Pokemon Day c:

Hey everyone! Just a quick reminder that my auction for Christmas Pins ends in 5 hours!!! Make sure you don't miss your chance to bid on it!!! 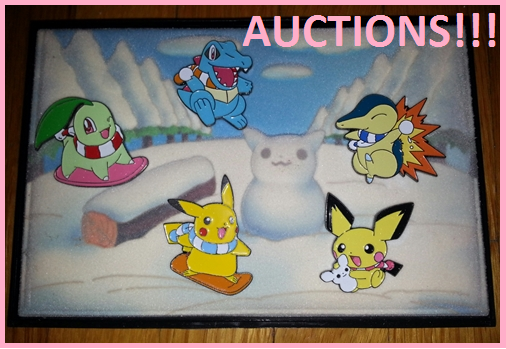 Also, here is my regular sales. Tons of new items have been added, here's a small preview of the new additions. Tons more available in my Sales Post: 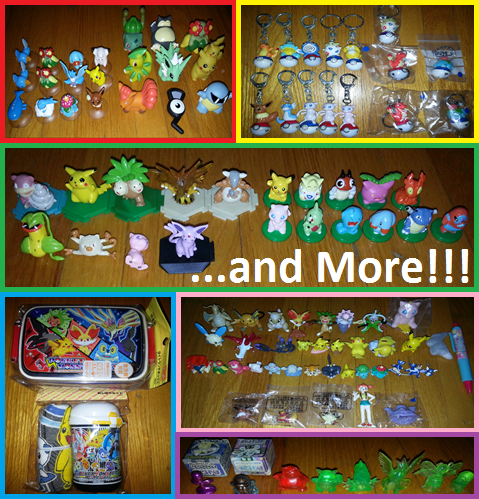 **You can click on any of the pictures above to be transported to my Sales!!!**

I am open to haggling and trades!!!

Have a good weekend everyone!

Today I bring you my spring swap gets. I got home and I found a box waiting for me, Now I knew I hadn't bought anything lately, and only yesterday I had picked up the last of my Noppin packages. I guessed right away what it coiuld be. As usual I hae uploaded a video of me opening fhe box, 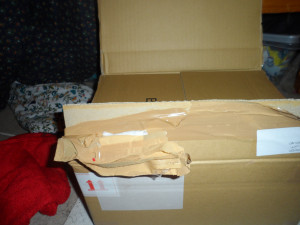 Hello everyone, I recently bought a small lot on ebay and in it are some things I was after a little more information on, Pics under the cut!

And just to make the post interesting here's some new gets, yay!

This makes me happy <3 I got enough fishy zukans to give them their own sea shelf!

OK it looks like a bunch of sea pokemon washed up on a beach and died but it's a work in progress!!

Anyway thanks for any info you can provide on the cards! I hope to have an updated sales post soon, I'm having a clearout <3

I'm looking for an I Love Mew UFO plush!

I'm interested in either the laying down mew or sitting mew. I'm not looking into getting a complete set or anything, just one of these TuT

[EDIT since i forgot to add this to my post ajfsk]
ALSO THIS!! I really love Goomy and the Swablu evo line and I'm having quite the bit of trouble finding this so I'd appreciate any help finding this gachapon fig  ;_; I live in the US and can pay via paypal

Hey everyone! I hope everyone got to have a fun day at Pokemon Day at Target! I myself am rather proud of my Froakie holo as it's rather adorable with Frodagier in the back (I'll post pictures later). I'm also well overdue on my collection update which I'll do around the next time as I missed my one year anniversary.

But with this all aside, I'm currently in search of some Axew items. You see, my younger brother has become a Pokemon fan, and I'm rather happy/proud about it since he did it on his own with me being away at college so I couldn't rub off on him completely xD Since his birthday is coming up, I decided that I'd surprise him as I caught him telling our dad he wanted an Axew (dream big little one because I wish pokemon were real too :'( ), so I thought what better way to surprise him than with some Axew goodies. He's more so into the TCG so if anyone has some Axew cards for sell I'd be interested them, but I'd really love to find him an Axew plush too so he could have his very own Axew. Thanks again!

So my SSS package came in! You can see the sss gift I gave to

I didn't get to make a post until the weekend, work has been pretty crunchy for me lately but everyday I've been checking to see if I got my swap. I'm so excited it finally came! 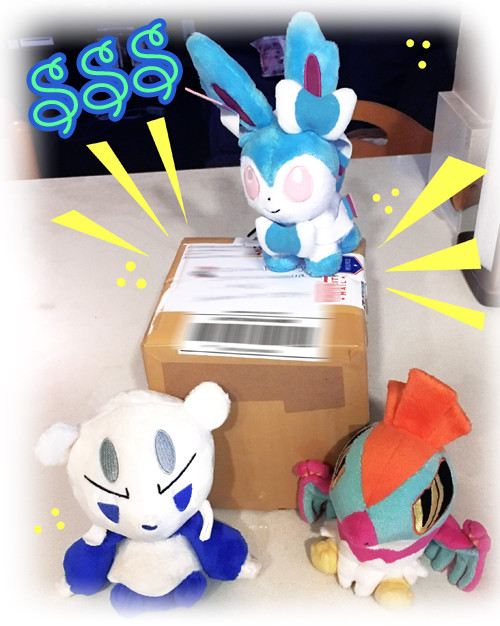 I have my Shiny Sylveon, Hawlucha and my newest pokedoll, Shiny Mienfoo pokedoll to help me open it! 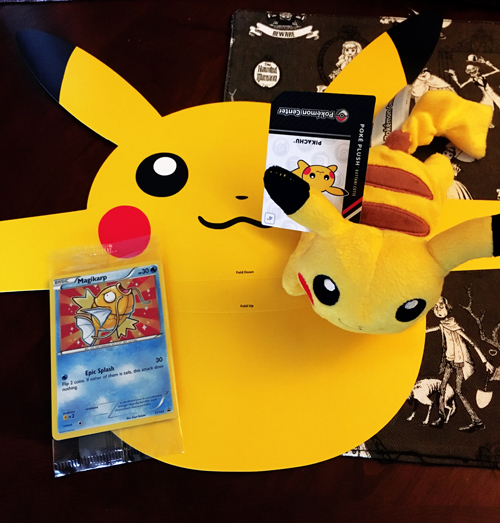 I also went out on a misson during the Pokemon Day 2.0 event at Target here in the States. Here's all the normal things I got there but I also got something bigger...and pretty amazing. Here's a sneak! Check out the story under the cut! 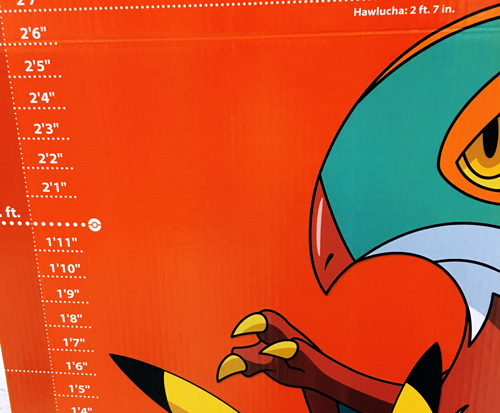 Looking forward to seeing everyone else's SSS posts! I need to take photos of some of my current gets for my site. Will do an update soon.

Hi everyone! I got back from getting a few things from Pokemon Day #2 with my siblings! I only got 2 things, but I'd still like to show them!

( Collapse )
Here's my sales post by the way for the new cards I'm selling!

That's all for today! I hope you all had a wonderful Pokemon Day if you went! Also I'm so sorry if your Target wasn't very prepared for today ;-;

Did any one get a extra Shiny Magikarp from Target today? One that they are willing to sell. My Target said they didnt get shipment.
Collapse