Hello all! I was going to wait until I got my items in to share, but I'm too excited to wait two more weeks akjfkjdfk
After years of searching, I finally got (one of) my grail(s)!!
( Collapse )
I updated my sales with collection weeding and stuff I got from lots. I've decided to sell my Groudon pokedoll figure strap, so that will be in there, too! 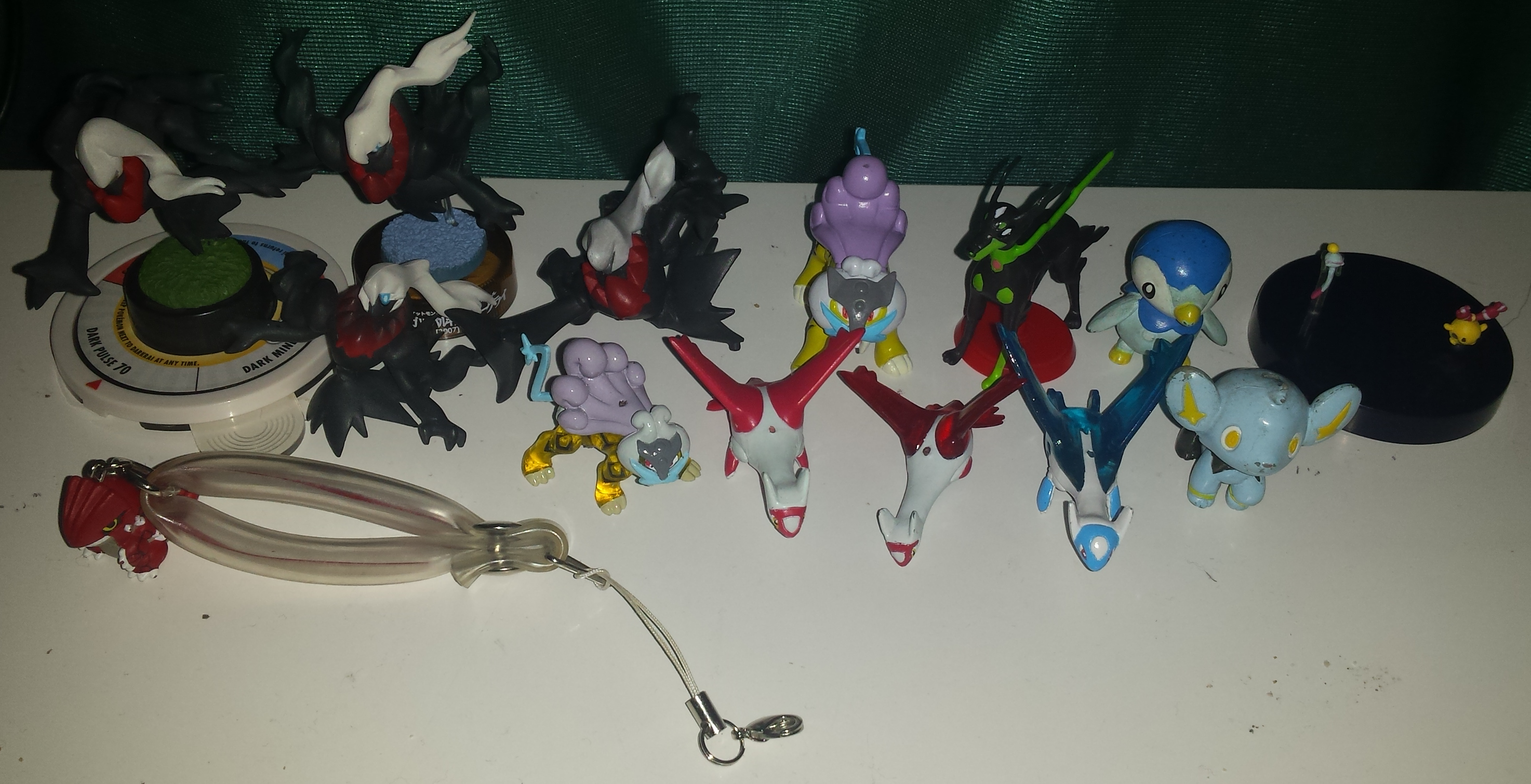 Sales preview
Click the picture or link to be transported! http://giratina.livejournal.com/3599.html

Lastly, I spent the past few nights revamping my collection site! I got most of the pictures/descriptions up (for my main collections), and I just need to do a count once I get all of my items in. I'm not entirely sure if it's mobile friendly yet, as I haven't tried it on my phone. Just a little heads up.
Let me know if you'd like to affiliate! I made a smaller banner, too.

Welcome all! i up dated the loose zukan pieces section and added some zukans, jakks, tfg :) 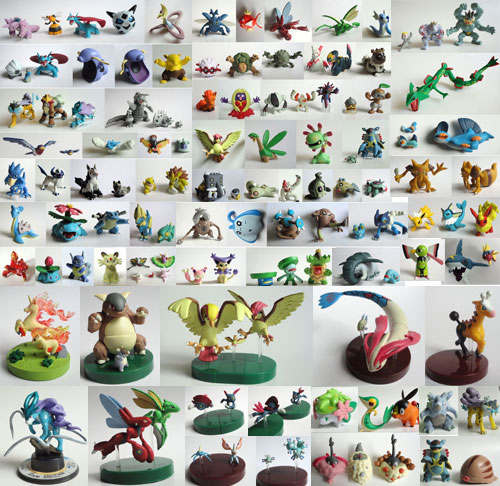 Preview pic of only the new figures added, a LOT more in the post,click the link to go to my sales :)
http://white-chocobo.livejournal.com/
All combinable with my non pokemon sales and always open for trades :)
Thank you!

Have a good weekend everyone! Happy 4th of July to those in the US.

Lately all I've been posting has seemed to be dinosaur themed, I just can't help it but today will have a bit of a dinosaur theme aswell.

First of I can't contain my excitemnet over my very first custom to arrive, I missed the mail lady yesterday so I had to go pick it up at the post office today, I simply could not contain my excitement and I opened up the package in the car, who wants to guess who's little hiny you can see here? 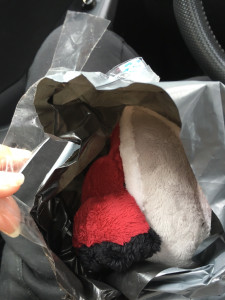 And a bunch of other smaller stuff also made it in the mail :)

( Collapse )
Who was your first custom plush? I'd love to see some pictures and hear stories about it ^_^

Hey guys, just hit up my local TRU and all they had was the card boxes for shaymin, but they had a ton of manaphy plush restocked. Not sure if anyone is looking to get their hands on one of those, let me know ! I hope I manage to catch shaymin at some point :/

Hi everyone! I'm having a clearout and have weeded out a bunch of things I don't need anymore so I've put them in a couple of lots on ebay,
There's a small zukan lot and a figure/metal coin/sticker etc etc lot. As well as that I've also put my Entei custom sculpture on there as he failed to sell here last time.

Some quick rules that apply:

And just to make it a little more interesting, here's a couple of gorgeous guys I got for my zukan collection recently <3

So I was having a rummage in the loft for some stuff and I came across these old items that I'd forgotten about.

I don't remember where U got these from. I always assumed they were released for the Lucario movie, but looking at them now I'm not so sure. I don't think they're even official! XD
( Collapse )
So yeah, looking at all those pictures, can anyone tell me if these are official products or not? I'd say they weren't, but I've never seen bootleg pokedoll merch before and these guys really do look like pokedolls (especially Pikachu and Mew!).
I also came across these weird pogs

It says on the back that they're called Power Caps, but google isn't bringing up any information about them! I only have a few but luckily Articuno was one of them! XD I'd love to know what other Pokemon are in the set! :)
Any information about these items would be greatly appreciated! :D I'll end with the last thing I found - an official piece of merchandise that I got from Nintendo World back in 2004! :) Lenticular Rayquaza phone strap!

Hello again!
I ran across some things while cleaning so here's a mini sales post! :)

Please let me know if you need additional photos or have any questions! :)

My newest collection; Trevenant, took all of a few weeks to complete so I think it's about time that I be self endulgent and start up a new collection I've been meaning to get around to:

I am seeking ANY AND ALL Skiddo and Gogoat items! Goats are my all time favorite animals ever so I have no idea why I haven't done this sooner haha...

Just keep in mind I'm not looking for customs right now only official items! I'd love to get some customs from all of you lovely folk sometime later though!

I have absolutely no items of Skiddo and Gogoat so if you have been waiting to unload some merch of them toss em at me! 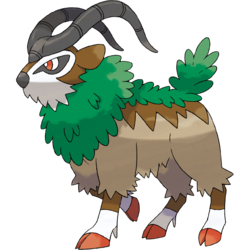 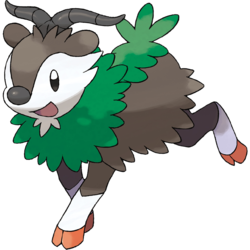 I have all I need right now! Thank you all for the offers I super appreciate it!

Hey everyone! it's that time again when I open up for plush commissions! Yay!
Before we start heres the basic info, as always please be sure you have read through my general sales policies as well as commissioning guidelines before asking for qoutes! 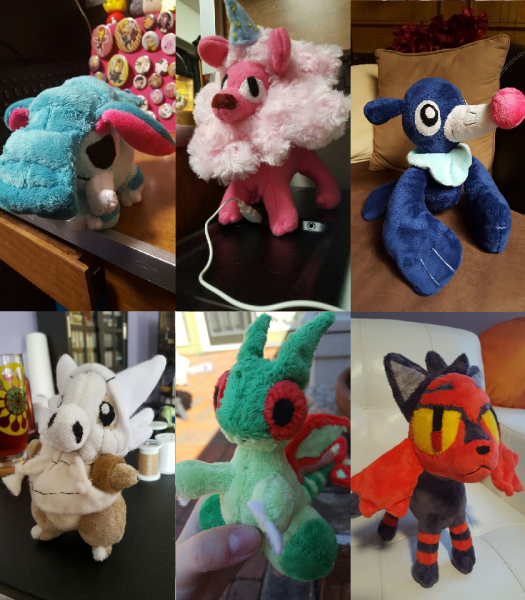 ( Collapse )( Collapse )
****Please be sure you have read my sales rules and commissioning info before asking for qoutes*****
Also check out my nifty style guide for examples of the different styles I make plush in.
( Collapse )
Slots Available 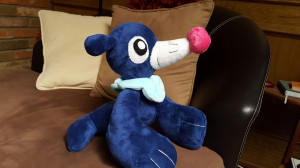 Also! Litten and Popplio are for sale! Littens Auction ends in a little over a day, and Popplio will end next week Check them out!
Litten Auction Popplio Auction 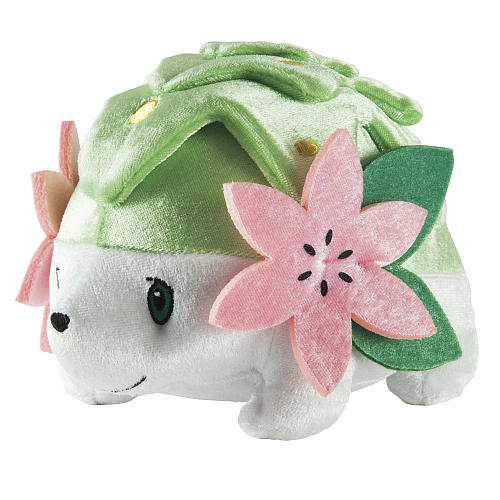 Since I'm always lurking on the Toys'R'Us website for the 20th anniversary plushes, this month they didn't release online orders early like with Manaphy. However, upon checking today, the plush is up for orders! Here is the link;
http://www.toysrus.com/product/index.jsp?productId=85626216&cp=&parentPage=search

Please get it while you can! Last time I checked, they were sold out online within a day or two and there were a few people sad about it :( I hope everyone who wants one is able to snag it! I'm also very happy about the new strict limits on purchases, so people cant buy the entire stock and resell them for ridiculous prices (because no offense to the plushes, but they're not exactly worth $50+ each D: ) Happy Shaymin month!

Hey guys! Me again. So far, everything's been going really well with my collection, but I had some questions regarding shiny tomy figures. I believe most were won as lottery prizes, but I'm most interested in the shiny magikarp figure. Does anyone know of info or any owners willing to sell this figure? All the posts also don't seem to know anything much about it. Any information is always appreciated! Thank you guys! http://ic.pics.livejournal.com/uosnim/63552471/18435/18435_600.jpg. EDIT: If anyone has or knows of owners of the shiny magikarp Tomy figure, I'm willing to pay $400 or more for it. Thanks for the help and spread the word that there is an eager buyer! :)

Hey everyone! I've been pretty dead in the community lately. I just don't see that much I'm interested in anymore! 😥
I've been pretty dead with art too, I'm going through a lame rut. It's probably bc I've been working full-time for the summer 🤑 ... which brings me to a wants post bc i have a bit of cash to spend 💸

Also my other wants plug!

ALSO pictures of my new kitten for anyone who cares!
+ it makes this post x1000 cuter!
( Collapse )

I've managed to navigate Noppin,
Japamart and search a little on YahooJapan with some success. FromJapan has ended that record.

Going to the add deposit page and using PayPal, it requests I use half width characters. From googling it this seems to refer to a Japanese writing style with smaller letters. Has anyone run into this phrase before? I apologise if it's an obvious answer. I looked around FromJapan's website and the comm guide to FJ.

Also, for a $35 and up purchase with fees, would the best choice be FromJapan or Noppin?


Thank you to everybody in advance for any help.