Hey y'all,
My beloved pet cockatiel escaped despite the fact that we took excellent care of him and tried to be cautious of any open doors or windows. We were going to have his wings clipped this weekend since they recently grew out, but alas, he flew out last Tuesday and has not been seen since.

So I decided, in order to distract myself from my loss, I would be pursuing a bird Pokemon collection! I love birds, in real life and in Pokemon, so I feel like this makes sense for me to do. I have a few birb wants. If anyone has the following plush that they're willing to sell or knows someone selling them, I can pay a pretty penny for them (within reason). These images are all taken from Google whoops lol.

Also, so far, I am aware of these bird Pokedolls:
Noctowl
Natu
Delibird
Ho-oh
Torchic
Altaria
Piplup
Chatot
Ducklett
Fletchling
Are there any other ones that you all may know about? Since they tend to be more expensive, I'm trying to collect all the Pokedolls first before I expand to other types of bird plush and figures. Personally, I don't think Lugia or Spritzee are birds, so I'm not generally interested in birdlike/Flying-type Pokemon similar to them.
Just a note, I am not picky about the hang tag or tush tag. I would just want the plush not to be ripped/extremely dirty lol. Thanks everyone!

I have Tafetta Plush, Rare Small Japanese Plush, Terrycloth Plush, Pracoro Dice and Dice Boxes, and much more for sale. All prices are negotiable so come check everything out here: http://iamconfused1.livejournal.com 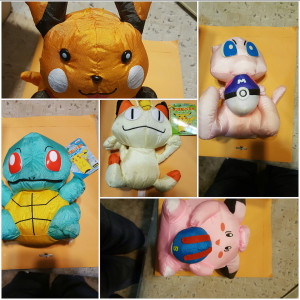 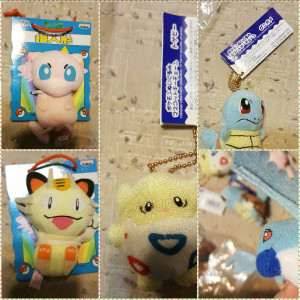 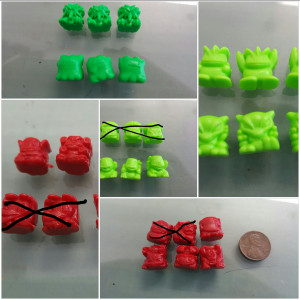 Happy Independence Day for those of you in the USA~ just putting a little sales plug with a limited time free Pokemon card deal per item ordered so don't miss out~ My next shipping day is Wednesday :)

I come from a smoke free home :)

I'm also accepting trades for the zygarde 10% Choco figure for other figures in the set :) I already have the pikachu one~

Hi guys! I've been doing some snooping around for some Poliwhirl goodies (surprise surprise) and I've absolutely fallen in love with something.

Poliwhirl Dice! (Things?) I am on the hunt for these suckers. None of these pictures are mine. (if they belong to you and you want me to take 'em down, just lemme know!) 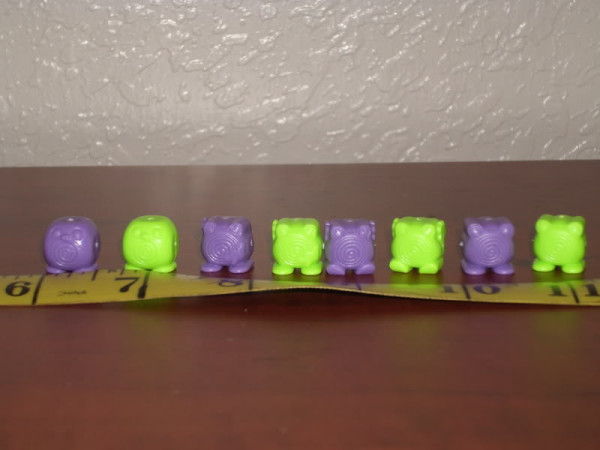 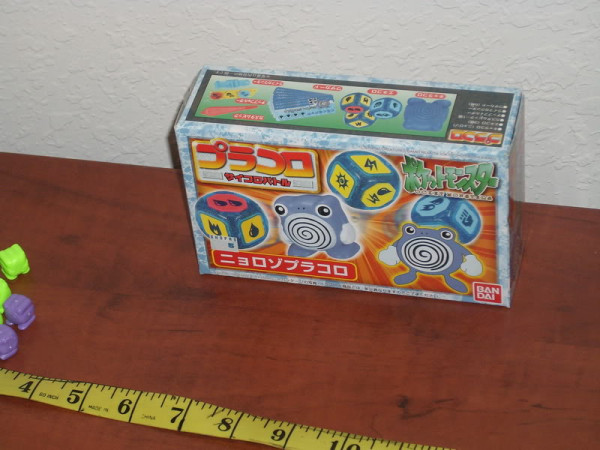 Does anyone happen to know if the boxed set actually comes with the colored, detailed Poliwhirl? Or is it just a solid-colored blob? 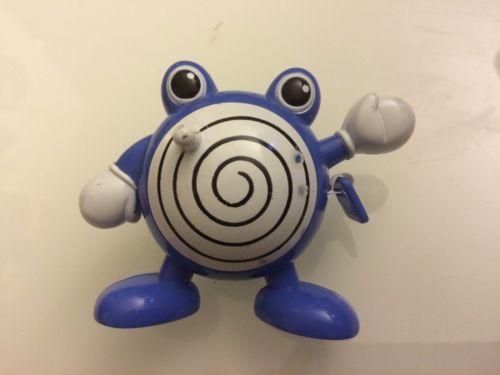 Also looking for this adorable Poliwhirl measuring tape! Never know when you might need to measure something... with a blue frog.. tadpole thing. Anyways.

But yeah! That's currently what I'm searching for! Thanks! :D

Hey all! So I just recently got into collecting pokedoll and I noticed that a lot of older pokedoll are made of "velboa" instead of minky.
I have a lot of minky plush and I'm aware of its softness and high quality.
How would you say velboa personally compares?
A lot of pokedoll I want to buy are velboa, but I'm very picky with the quality of my plush and if it's not on par with minky I might regret the "lower quality" purchases.

Thanks so much for the help.

Ps. My name is Kellie, I'm new, and I'm always on the lookout for Houndoom and Dialga merch!

Hi everyone! I'm doing a post office run this week so I wanted to bring you my updated and reduced sales. I've added nine new plush to my sales and reduced prices on a lot of items. I REALLY need these things gone so please keep in mind that I am very open to haggling! Please click here or on the preview to use Teleport! 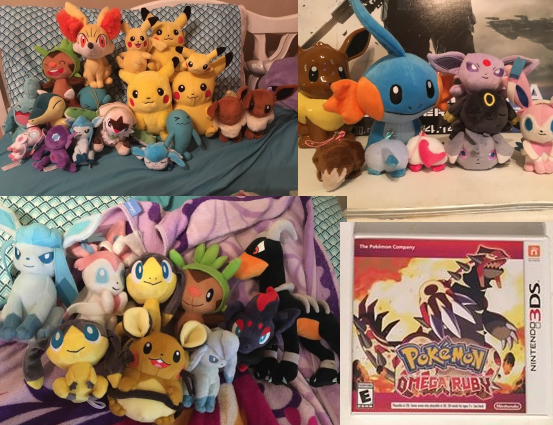 Also, if you include "WAABUFFET" somewhere in your commital to any sale, I'll throw in an additional 10% off the highest priced item you purchase ^____^

I do commissions of pokemon of your own design! : )

Hiya! This is a kinda big multipurpose post with each section having its own cut.
I've decided to put up one of my Cyndaquils and It's Demo wallet/pouch up for auction, and I updated my sales with a bunch of new stuff. Still trying to weed things out! I was looking through my Cyndaquil items and kept running into duplicates so those are added to the sales. I also bought a set of the new Kuttari charms and was wondering if anyone would like to split? Flareon and Glaceon are available (more info and pics below)!

That's it! Hope everyone's having a great day!

So I went to the Pokemon US Nationals this weekend, just to kinda check it out (I don't play TCG and I only play the videogames casually). I mostly went because they set up a Pokemon Center retail shop. It was pretty much the same stuff that's available online and I bought the newest Celebi Pokedoll! They still had some of the older velboa ones--coincidentally, I also needed velboa Celebi to complete my collection. To the best of my knowledge, I now have the full set of Celebi pokedoll plushes! 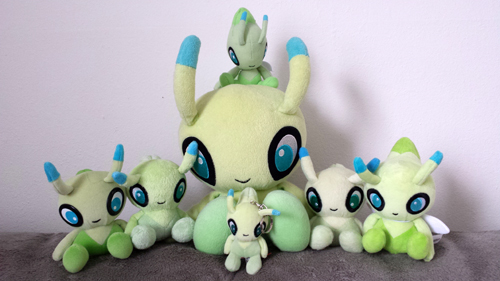 Technically, there's still a JP velboa and probably multiple year releases...but I don't feel the need to get them all. ;) I think the newest one might be my favorite--you can see the eye shape is way different, in addition to the coloring. That one and the velboa also make me happy because they're the first and only items I've been able to purchase from a Pokemon Center (sort of) in person, which is special. I'm really happy to have all of these little pixies in hand!

Meanwhile, I'm still looking for a US Secret Base Lapras Doll if anyone has one for sale/trade! 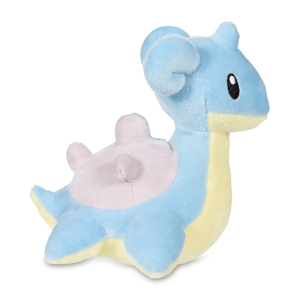 Hey guys! Sorry for the quick succession of posts, but I had a question that one of you guys might be able to answer. Does anyone here collect or specialize in knowledge of Pokemon posters? I've just recently been inquiring about them, and there's not a lot of info on the internet about their specifics. Along with that, info on Meiji and their Pokemon merchandise besides their cards? Apparently they've made posters as well. If anyone knows ANYTHING, any help would be appreciated, as always! Thank you guys!!

I'm looking for some zukan :

- Skarmory
- Horsea/Seadra/Kingdra
- Ho-oh (yeah I know it is a set but there are more Lugia's lovers sooooo if by any chance you don't want to keep the rainbow bird... I'm here :D )
- Turtwig/Grotle/Torterra
- Lileep/Cradily (with base)

Just let me know if you have any for sale!

Thanks in advance ^w^

Hello, I hope I'm allowed to post my question here since I didn't know who to ask for help T v T

So I've tried using FromJapan for the first time a few weeks back ( just waiting for all my items to arrive to the warehouse now ) and I've foolishly clicked on the "keep seller's original packaging" option for each of the items I've won...and then I read about how you'd basically be paying more for dead weight in your package ; v ;

Is there anyway to remove that option? I think you can use the lightweight packaging option but there's an additional fee, right? Ahhh x v x

Any help would be greatly appreciated!
Hi there! Today I'd like to share my current 20th anniversary Tomy collection...
Pikachu, Mew, Celebi, Jirachi, Darkrai, Manaphy, and Shaymin! =)

I'm going for a complete set of plush + pokeball figures. (only wanted the Mew tcg box to keep sealed) So far I'm up to date, with doubles of every plush besides Pikachu. (I almost skipped on Pikachu altogether lol) I love the way these look MIP, but I also wanted to display them out of the package... and since the 20th anniversary only happens once I'm enjoying it while it lasts! Even though I've been a fan since 1999, I missed out on every in game "event download" Pokemon all the way up to Black/White. (I think Keldeo was my first legit event) It's nice to finally obtain them on 3ds without a gameshark/action replay, so thats a major reason I decided to collect 'em all!

More pics are under the cut:
( Collapse )

While setting up this display, I noticed a pattern with store exclusivity: Pikachu has three different plush (standing waving @ Gamestop, sitting winking @ ToysRus, sitting waving @ walgreens). Starting with Mew, the pattern goes 1x for Gamestop, 2x for TRU, repeat. I just wish gamestop hadn't requested their pokeball figures to be in the "wrapped pokeball" packaging, as opposed to TRU's display packaging. It ****s up the uniform look of the collection! =( I'm thinking about taking my extra plush boxes and trying to make "custom" packaging for the Gamestop figures (Mew, darkrai, arceus, genesect). I would need to buy extra figures to get the packages though....

Do you collect these too? I'd love to see your 20th anniversary collections / displays! <3 Feel free to post pics or talk about the never ending "hunt" in the comments!

I hope everyone has a great 4th of July! Thanks for looking! =)

Happy 4th of July to any of my fellow Americans in the USA! :) I just wanted to post a quick wants post as well as an updated sales post! Added a few things, pins, megabloks, etc!

Here is the link to my sales page:
http://pmxellos.livejournal.com/2888.html 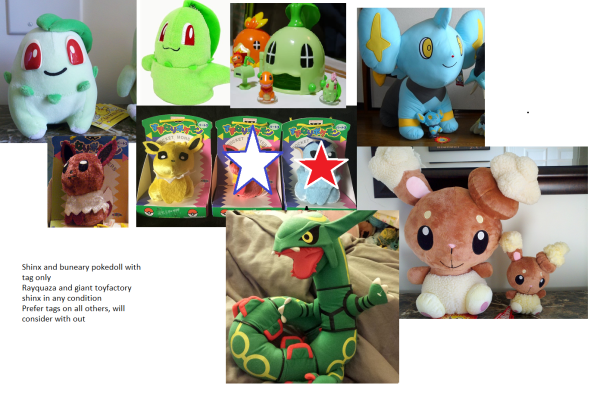 I just have some quick sales today~


* Sales permission granted by dakajojo 7/20/2011
* I Ship from MI, USA.
* Feedback: http://feedback.pkmncollectors.net/feedback/view/herar/
* I accept trades.
* I DO NOT accept haggling.
* RULE CHANGE: commitment takes priority over quotes now! tired of people not responding back in a timely manner. :(
* I do holds for 24 hrs. 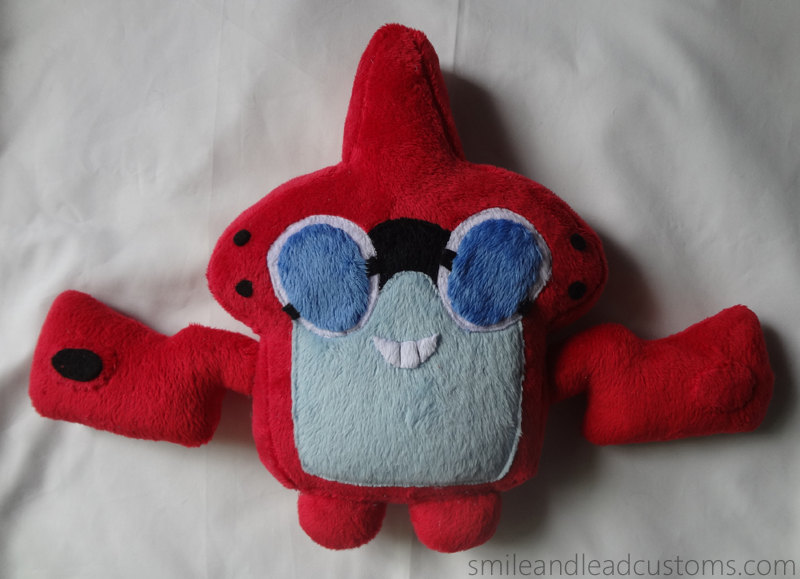 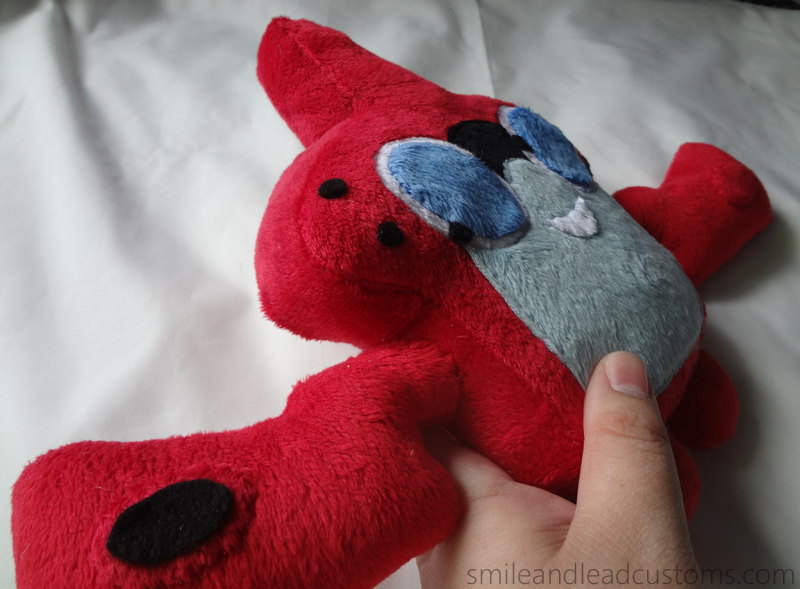 I also have several other items that are in stock and ready to ship in my Etsy shop! Obviously you can buy them through me instead of in my store, but my store takes cards if you need to pay that way. 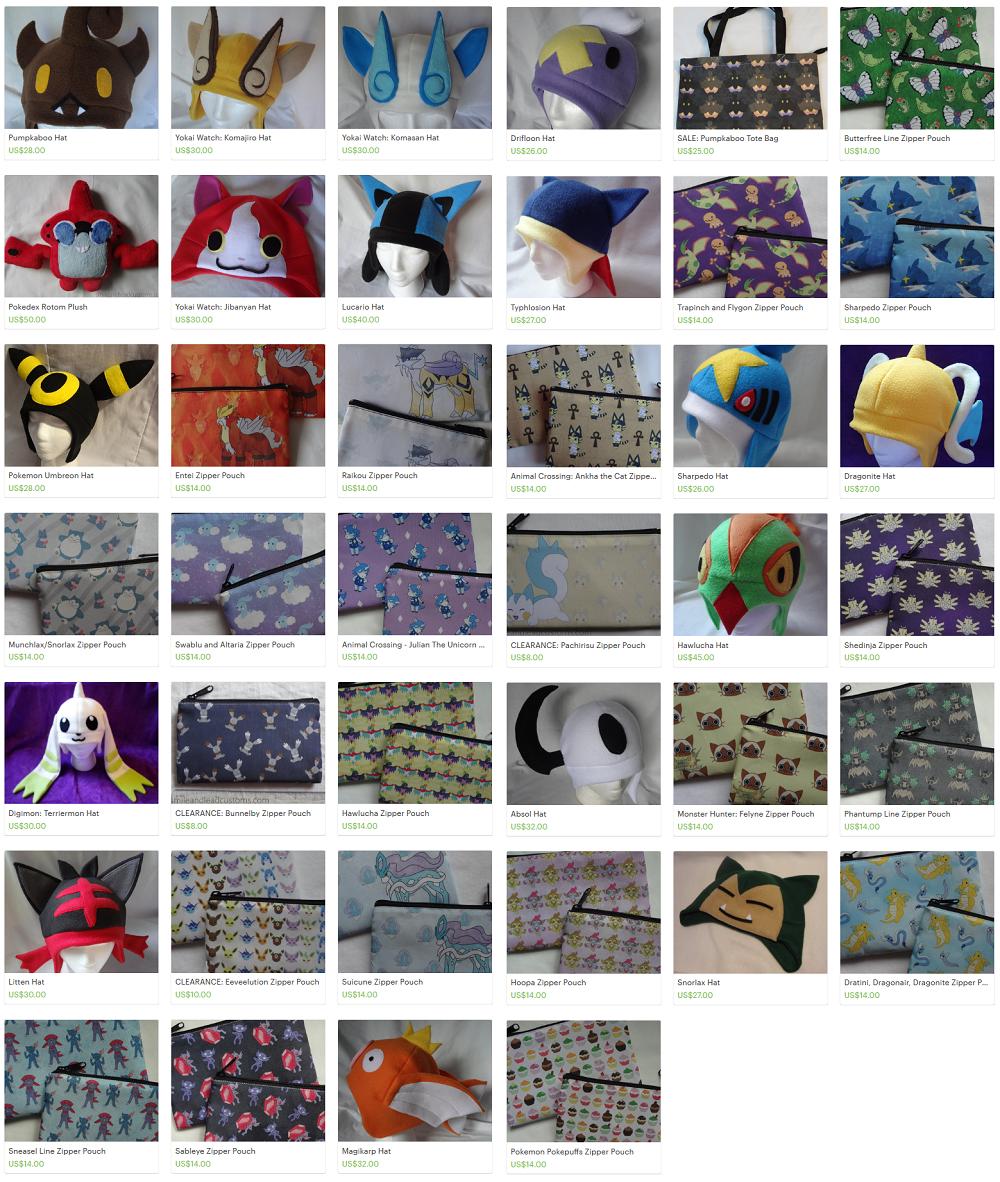 click here or the photo to go to my etsy.

I still also have some Pikachu mascot plush for sale! 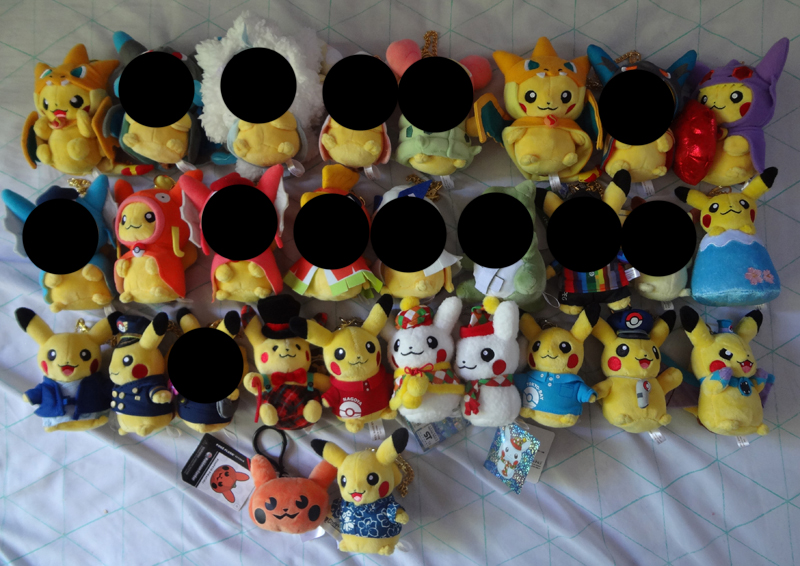 Post is here: http://pkmncollectors.livejournal.com/21380748.html
bottom 2 rows of plush are now $15 OR BEST OFFER, get a better deal if you buy more than one.

Hi guys, I just got a few boxes from Japan and I made some weeding sales with a few plushies from my collection so you can take a look my new sales. But first of all, does someone know what brand is this upset Eevee? I wasn't able to get any info about it :/ 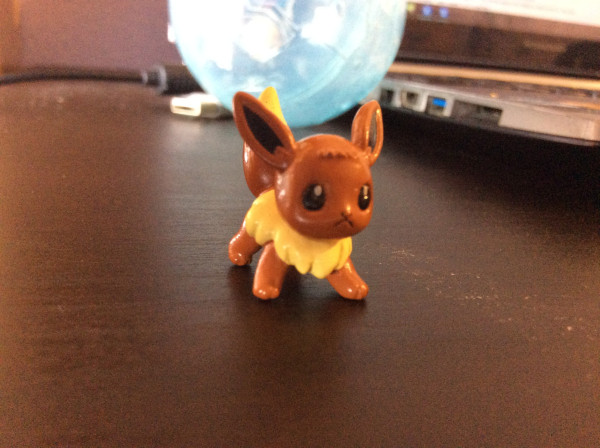 ( Collapse )
2$ each
Thanks and like usual I'm looking for some items. I REALLY NEED the Larvitar UFO so if someone know anything, let me know!!

Hey again ^^ Sorry for posting two days in a row, but I'm just dropping by to say that I've added sale prices to most of the things from my last sales post. Click the Drifloon below to be carried away to my sales <3 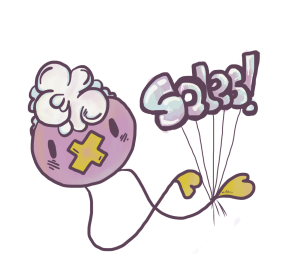 I am hoping to do some collection weeding in order to clean out some space.  (Don't worry.  My Ralts, Weedle, and Seedot line collection are here to stay.  :D)  So, I am offering a lots sale.  This price includes shipping for US buyers.  International shippers....I will try to offer some sort of discount.  ^__^   These prices doesn't included paypal fees.  Sorry.

hello again! i'm back with a list of high wants for my collections that I have. these are the big priority items but I do have a permanent wants post here if you want to check it out.
(pictures are not mine. if they are yours and you want me to take them down, tell me.)

ALSO: i am looking for any pokemon new 3ds cover plates too, so feel free to offer if you have any!


thanks for reading! :)
Collapse