Anyone knows what this is? A sticker sheet? Saw it in a completed auction :( 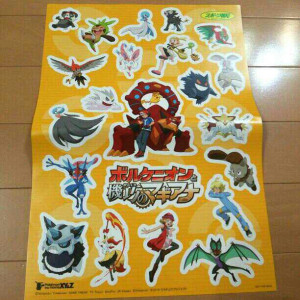 I'm looking to get it, or at least find any info about it.

Last month was Shaymin month, and I got the idea that I should get the plush of her. I've already had the Sky Form one for years, and I guess some of the reason why I was hesitant to get her was because if I were to count my Pokemon, there would be a new distinction between Pokemon and forms, and would complicate things. Nonetheless, I decided it would be a good time to get her.

There's one that I had wanted, the Tomy one with the fuzzy top. I found one on ebay along with two smaller Shaymins, but it was $57. (with $25 shipping!)

However, it so happened that

revarrie had her in a sales post! I got her.
And she's so adorable.

She might be the most pet-able and cuddly Pokemon I have. Just so cute having her near, especially on my bed. <3

Now I have both Shaymins! (And if I want, I can restrict Skymin to the daytime to keep with the theme. But probably not.)

I also found this Mewtwo at a used game store near me! It looks like that new Sanei one, I got it cause it looked really good.
(The cashier pronounced him Moo-two.)
He also said as he rang it, $4.(whatever it was) cents is your change, no Master Ball required. So that's funny.

Anyway, here's a poll that I got inspired to make.
Recently, I had a dream involving Keldeo, something was happening with him, I don't recall what. But I awoke for a moment, and I got the urge to get the Keldeo plush off my shelf and adore him. I noticed though, that he was near the Shaymin I got; both Mythical Pokemon. Two of my favorite ones. So I got the idea for this poll. Who are your favorite Mythicals? Try to keep your choices to around three.

Open to: All, detailed results viewable to: All. Participants: 103

Who are your favorite Mythical Pokemon? (Try not to pick more than 3)

Hello everyone, I'm Jas. I've lurked this community for many years, but for some reason I never thought of joining. I collect Pikachu, I know that must be unoriginal, but I really love the electric mouse. Some other Pokemon I really like are Mew, the Cyndaquil line and the Fenniken line.


Anyways, I do actually have a question about this particular Pikachu figure, that I purchased from a collectables shop while on vacation. 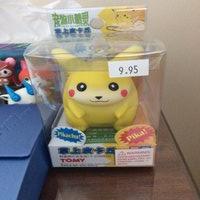 Can someone please give me some information on this?

Hey guys ^^ I'm back again with a few more sales to try to make sure I can cover my Y!J box shipping and such :D Really excited for this upcoming collection update, I tell you!

I am shipping later today, so if I receive payment before I go (in about 5 hours from now?) they will go out today! If not, then later this week :) 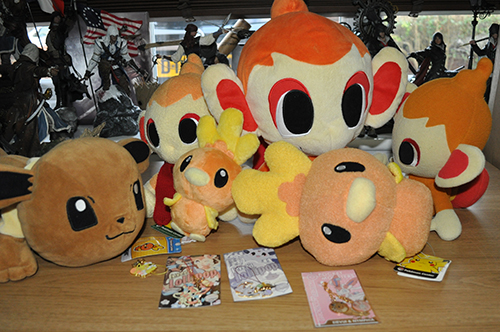 The teaser contains the items I haven't listed before. There are more under the cut! Pokebox ahoy!

So today I have for you, some oversized/DX starter pokedolls, a couple of pokedolls and canvas plushies, 3x Pokebox eeveelution charms, a rare 2006 DX Eevee plushie and a Pokemon Center Eevee/Sylveon pair charm set and a few others plushies and figures too.

First off, thank you guys for supporting my last "emergency weeding" sales. My suitcase is going to be a LOT lighter because of it. :'D
Almost all the lots sold, so I've condensed the lots, and added new ones because guess what?
I... FOUND... SO... MUCH... MORE... STUFF. T___T
It literally just keeps hiding in nooks and crannies! :'D

The rules are the same as before: If you'd like to take it all - BIG OL' DISCOUNT.
Things are OBO! Please go ahead and offer reasonably!

Click any pictures of new & old sneak peeks to be transported! <3 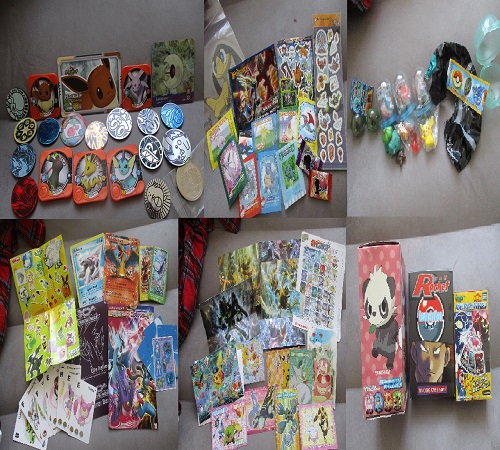 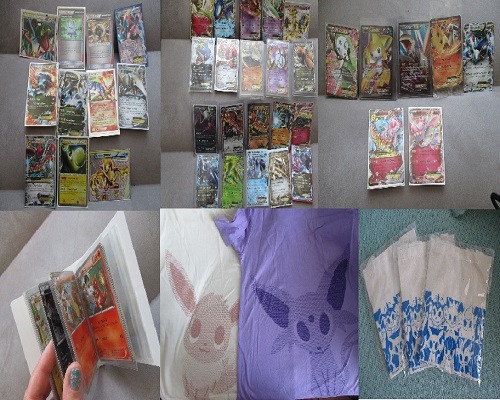 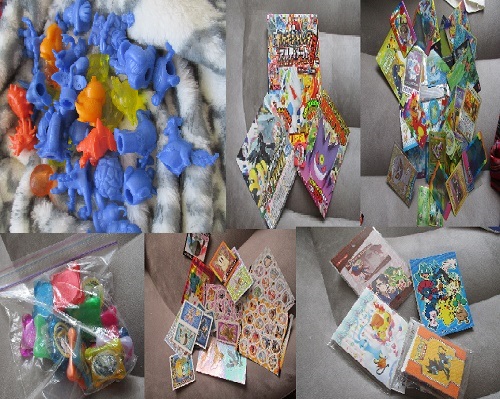 ( Collapse )
Also I'm still looking for pikachu pair merchandise or the chespin / bulbasaur photoframe or the pikapair photoframe. Please redirect me to any listings of them, thank you! ^^

Konnichiwa Everyone~
I was in Japan for about two months this summer and I truly had a great time there! I was also able to get some really cool Pokemon merchandises and I thought I would make a sales/auction post with the things I bought in Japan! This is not everything though :)


Preview of the Auction Items:

Auction will end this Saturday (08/20) at 7 PM Pacific Standard Time!! You can bid on these items on this post!


Preview of the Brand New SALES from JAPAN: CLICK on any of the pictures to be transported!
(Or You can click here or on this link http://haepbrosonearth.livejournal.com/2652.html) 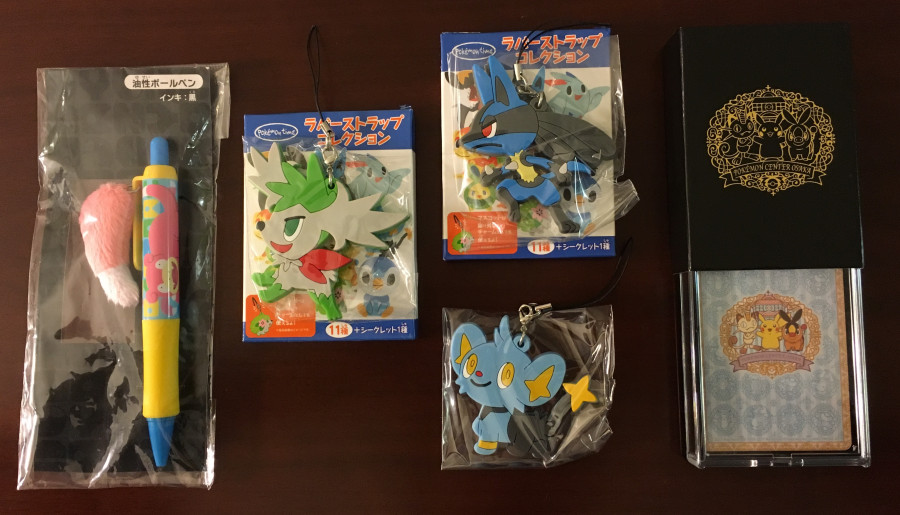 Thank you for reading!
So i recently bought a 2008 charmander anniversary pokedoll, but having trouble telling if hes a bootie or not.. can anyone help?? 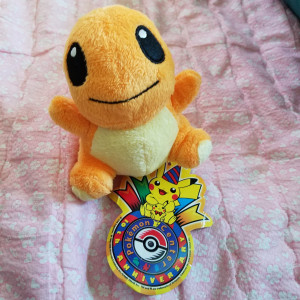 I'm going to be putting all the items in my sales onto ebay soon, so if you were interested in anything I suggest you purchase it now before it's too late! I've lowered some of the prices, discounted the large card lot by $150, and lowered the price on the Reshiram lot.

I may be slow to reply sometimes since school has started.
Click on my sales banner to go:

I'm still not willing to ship internationally right now unless the item can fit in an envelope. Sorry.
( Collapse )

I'm sorry if someone already had mentioned these or posted them but I didn't see any reports yet of these guys in the wild. My amigo

agentspectre 's TRU happeend to get some new TOMY merch in. 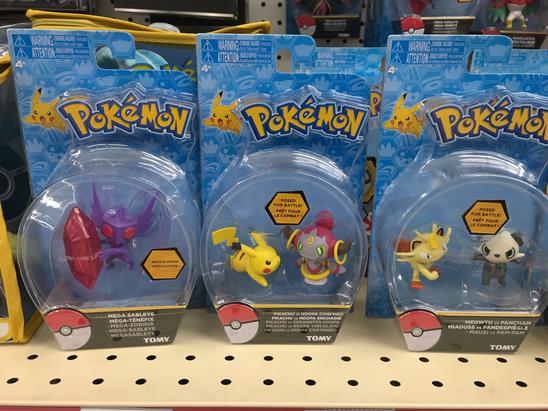 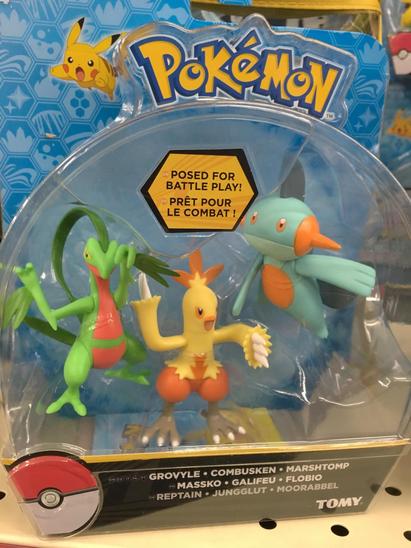 We got ourselves a nice little assortment including Mega Sabeleye, my boy Hoopa and Pikachu, and Meowth/Pancham. There's also a triple pack with the 2nd form Hoenn starters. She also mentioned some X Charizard mega evo sets too.

Pretty nice, I didn't think we'd be seeing anything new here in the US before we'd start seeing some SM stuff.

Hey all! I just wanted to do a quick collection update...but not for the rhinobunnies I'm famed for!

Now, before you guys all get worried- "Oh no! ANOTHER eeveelution collector?!" -I don't collect her hardcore. I only collect certain things that are super cute, and more often than not, common. I like to adopt her (similar to Nidorino's Burger King keychains, I house multiple) from group auctions where she has no bids; or occasionally from sales posts that I've noticed she hasn't sold in a while.

I never had a favorite eeveelution when I played the games growing up-heck, if I'm honest, I never saw the enthusiasm until Pokemon GO came out. (I admit, I had a small affection for Vappy before that)
Then I fell in love with all of them-Eevee too-and all of gen 1! (Except for you, geodude. I love rocks but I just never liked you, sorry.)
The decision to collect Vaporeon goodies wasn't premeditated...but I have fallen in love with what I have, and I can't believe I ever left the community here! (Well, my wallet understands.)

So, without further stalling to charge my phone so I can use camera flash...

Also, just curious; has anyone ever done a Nuzlocke run on their games? I'm doing my first one on Pokemon Crystal with a rom on my phone. So far I lost a Hoothoot and a Gastly...I was sad; I liked Farny and Skelekitty.
Current team:

Just dropping in to share some of my latest gets! Seems like I've been adding quite a bit to my shiny collection lately ;v; 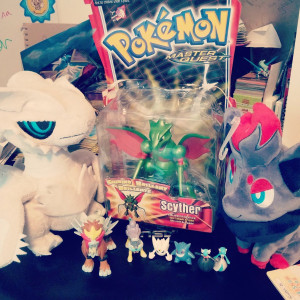 I can't believe I finally have the shiny scyther hasbro!! It's an absolutely gorgeous figure *A* now the ONLY shiny hasbro I'm missing is charizard!! I'm not in a huge rush for that though :,>
Also got the new shiny candy figures, along with a raikou european candy figure (haven't added much to my raikou collection lately so YAY)
Reshiram was a pokedoll I wanted for quite a while but I kept passing them up since pokedolls are only a side collection, but someone on instagram offered it along with entei (whos going to a dear friend of mine) for a small custom plush so I was excited for that! The zorua all star plush is super cute as well! Probably my favorite zorua plush! 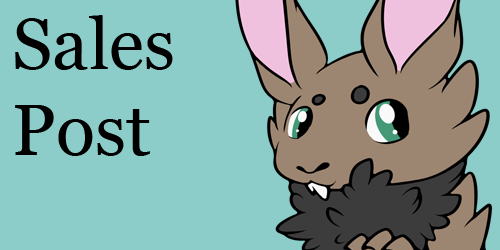 I've got some new additions to my sales post, including some of the new candy figures as well as lowered prices on some other items! Feel free to check it out!

Also on the lookout for some major wants! Looking to buy or trade for them! (I may even trade a custom plush for the rarer ones!) 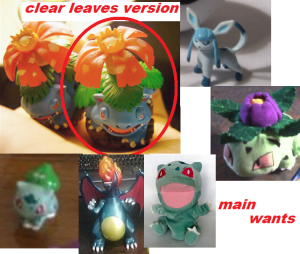