It seems that GameStop has put the Arceus plush back up AND you can order more than one it seems. Before, you could only order one plush due to availability for mass purchasing. I've gotten my 2 plushes, get yours while you can! 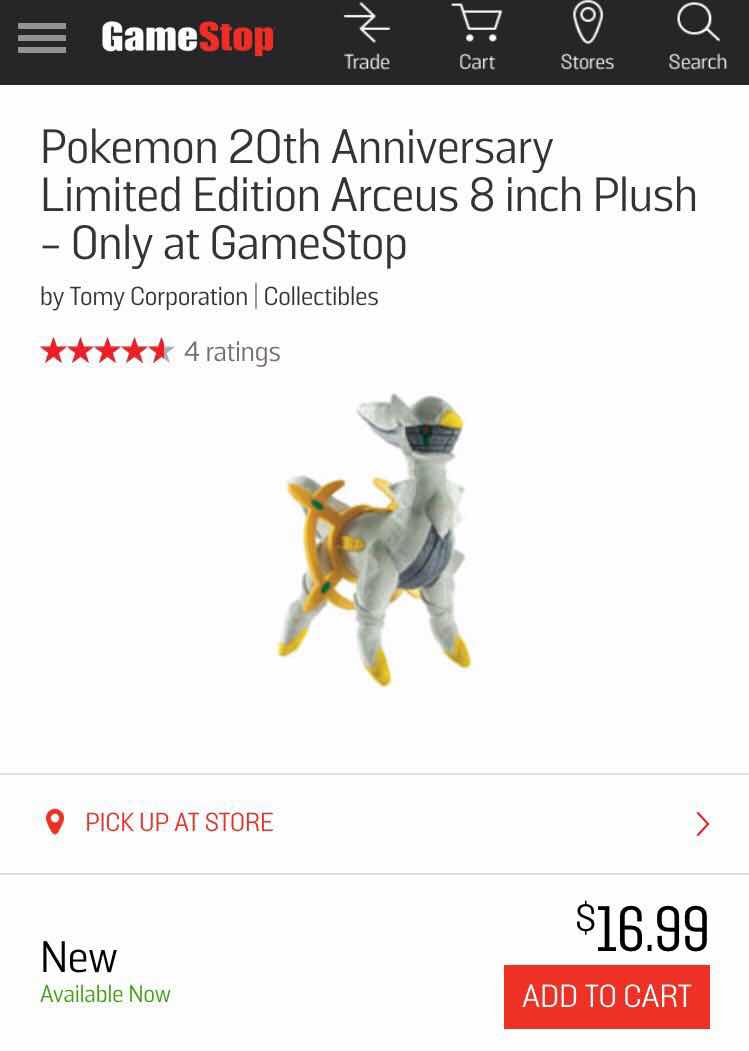 Hey guys! My first post here. Does anyone have a clear Espeon attack kid or the clear original kid for sale? I've been looking for some time and have not seen any (the YJ lots are really hard to tell). Please let me know if you are selling one or know someplace I can find them :) Thank you!  (pics are from google images, not mine)

Hey hey! I'm moving in a month and would love to sell a few things before that!

Click the pic (or here) to visit my sales post - there's a ton of other things for sale as well! 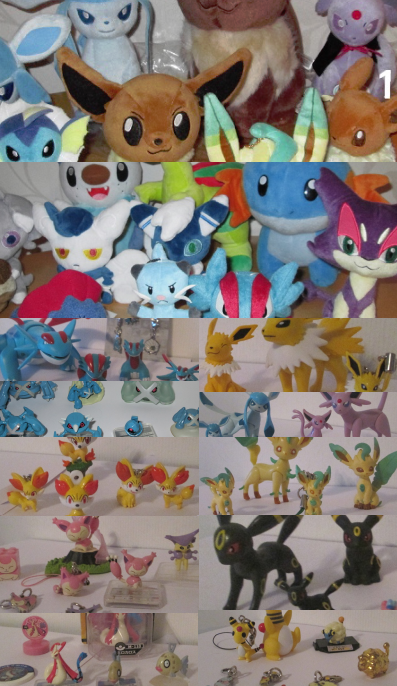 Hey everyone! I'm really trying to clear things out and move on to the next batch of schtuffs to sell! So I've listed everything leftover from individual sales to lots on eBay:

You should be able to click on the photos and be taken to their respective auctions but just in case: http://www.ebay.com/usr/doryphish
Sorry, I will not split lots anymore! Feel free to Group Auction if you want just 1 specific item! I have all information in the listings, but if you need to know more, feel free to ask via eBay or here!

As always, I'm working on my site, thanks for looking and have a wonderful day!

This is just a reminder that my auctions will be ending in less than 20 hours!
More than half of the charms on auction still have no bids! The other half are still at their starting bid!

A lot of rare charms up for offer here so don't miss your chance on these little beauties! Especially the Tufty Pichu/Pichu/Houndour Pokedoll charms, the lottery shiny Rayquaza charm, and the Golden Magikarp charm set!

Simply click either photos below to be transported to the auction :) 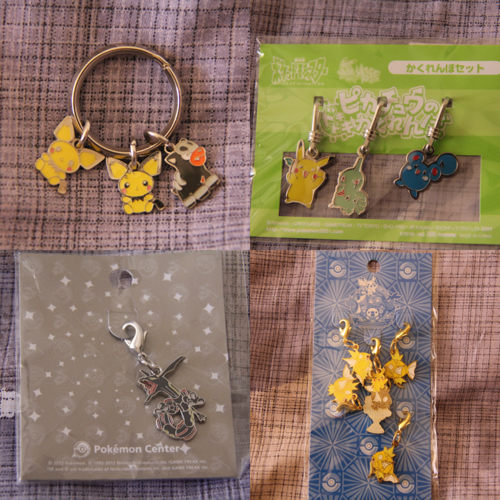 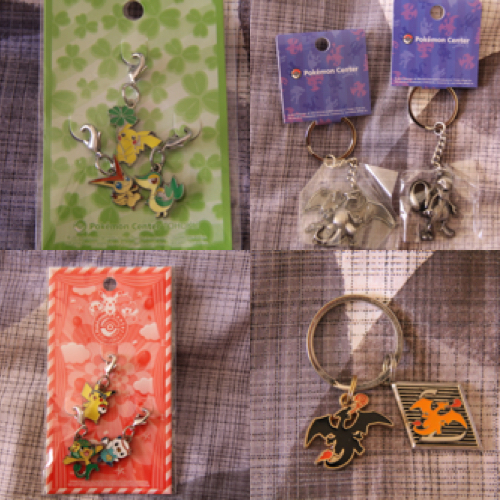 Sorry for the pixelated pictures.

Enjoy the rest of your week everyone!

Im new and i have a question to all of you. (Also a friend of mine asking the same thing).
I collect anime figures and i always buy 1 figure, maybe 2 tops from the auction.
Now me and my friend looking to get ourself into collecting specific pokemon merch (i love Mew, eevee, espeon, skitty & flareon ofc)
And we went to yahoo jp (he buy mostly figures and i buy dollfie stuff) and we came across this auction (it already ended so by rules its allowed)
http://page21.auctions.yahoo.co.jp/jp/auction/j402470346

It ended around 180 dollar o.o
And its a LOT!
So we have a few questions for you all as poke merch pros!

1. Why it got sold for 180$?
2. Why to buy a HuGe LOT where you cant even know what merch is it?
3. How you guys/girls identify at least some of the items in lots sales similar to this?

Thank you for any help!

hey all! I saw this noibat plush at walmart & remembered a few people that really wanted it, so in case there are people still looking for it I can do a pick-up for it!

I'm downsizing parts of my collection, so I've added some new items from my personal collection to my sales! Feel free to make offers on things that are here. 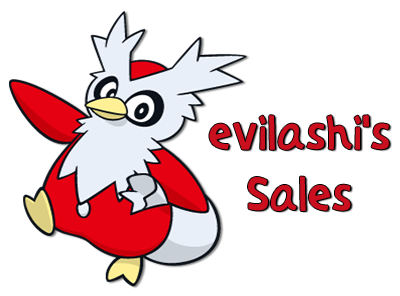 Final sales before a break since I'm moving to Stockholm *o*

You find everything here:
http://sugar0verd0se.livejournal.com/2871.html

I'll give a good price if you buy several items.

First of all, is anyone doing pre-orders on this thing? I remember seeing a pikachu version of this before, but it looks like an eevee one is coming out! 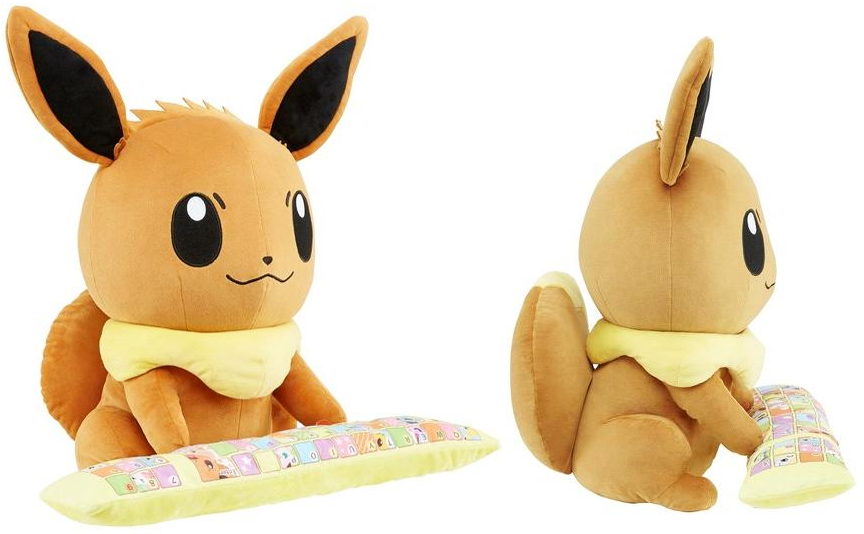 So I just made the move into a new place, buuuut... unpacking and rearranging everything on the shelf is hard work! Especially when the shelf doesn't even exist yet. :( Here is my lovely little plushie corner. 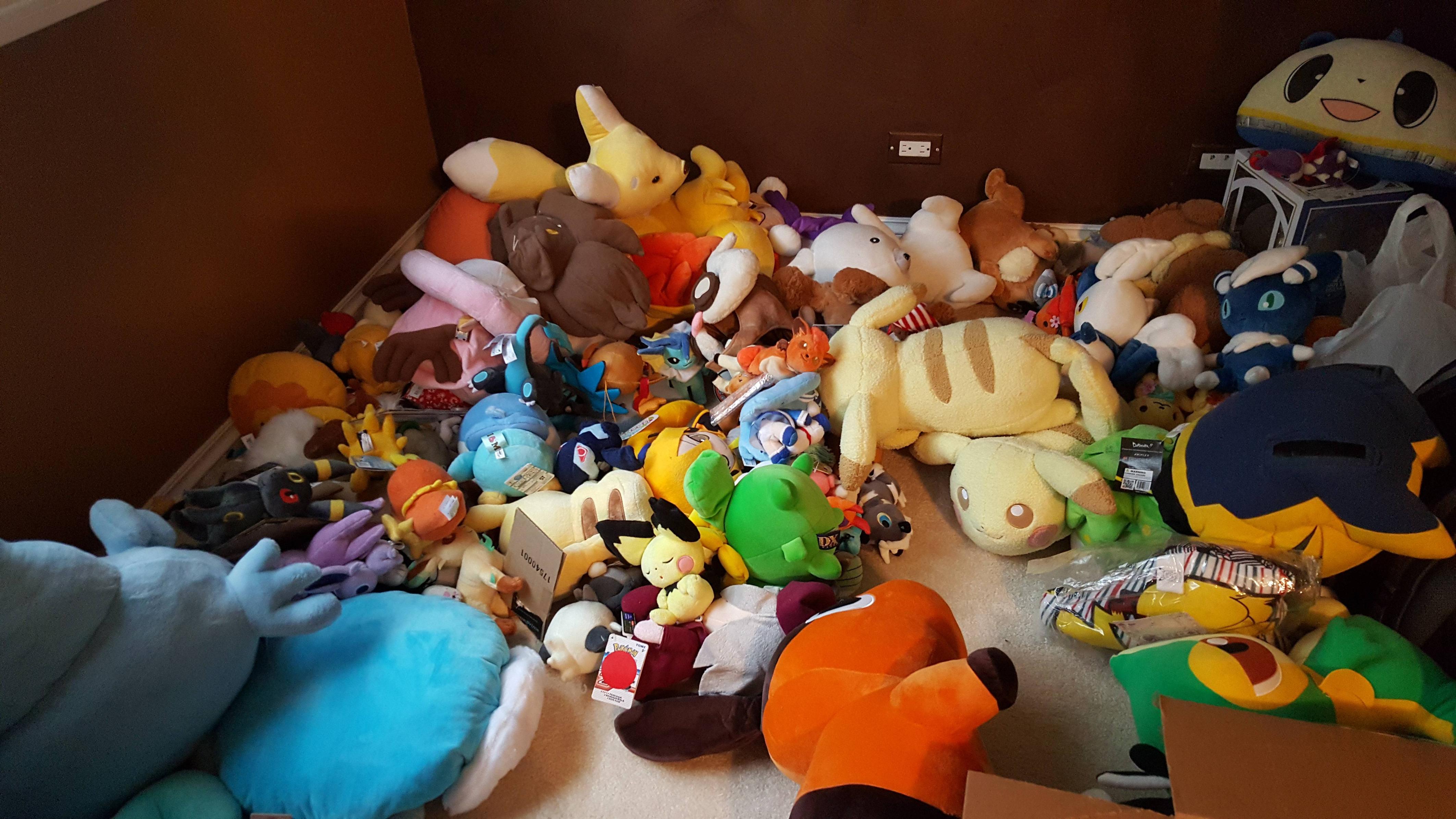 Despite being partially moved in, I put in a big order from Pokebox which I'm excited to share. They rotated out their gift coins and I just had to get a set. 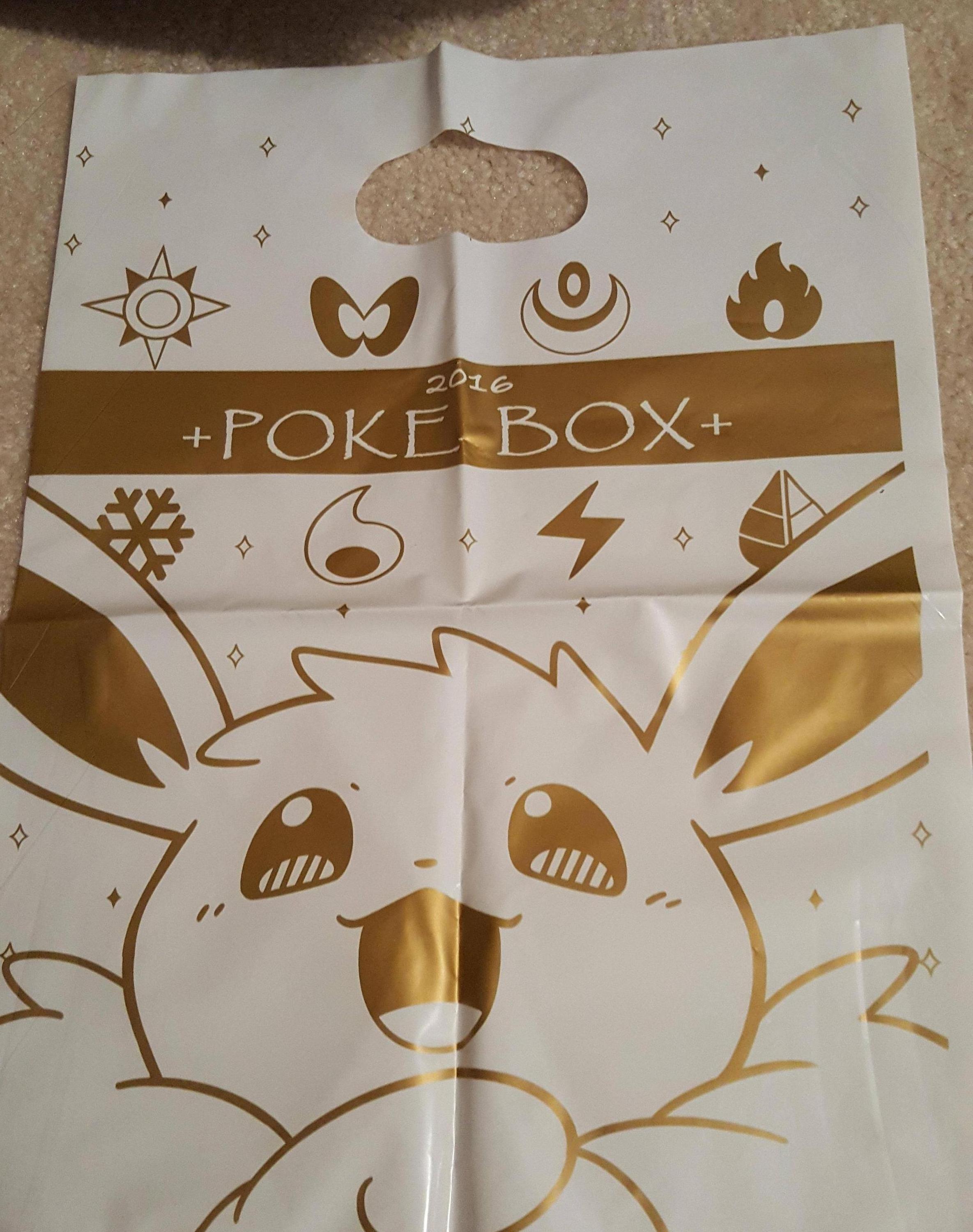 agentspectre sent me some more pics the other day with even more new merch heading into your local TRU stores (and they might be there now!) 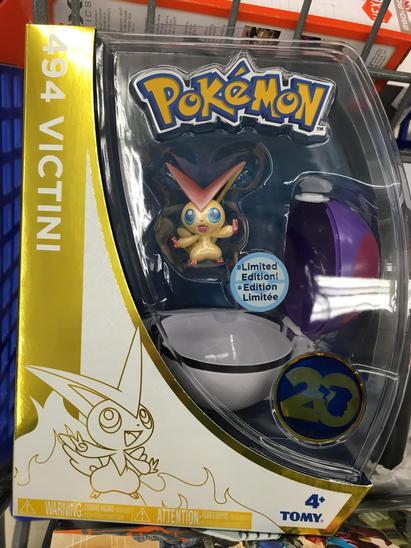 Yeah got your attention huh? Unfortunately Victini is register locked until Sep 1st...so...you're not gonna be able to get him early.

Other stuff includes lots and lost of Pokeball merch including some new plush balls, and some "Throw and Pop" styled Pokeballs which fly open and violently eject a Pokemon out...kind of like those old ones with the keychains!

It's pretty exciting seeing more merch coming out, especially as we head into the holiday season. Many stores are doing their fall resets now, so you might find a bunch of things at one, and not much at another.

It took a while (sorry for that!) but I finally got all Shiny Gengar figures here!
Look XD 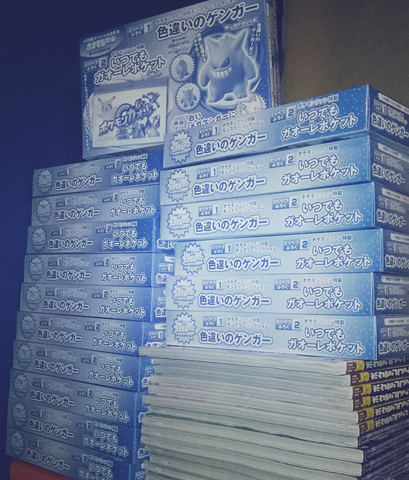 Below you'll find your totals, if you have any questions feel free to ask!
I'll be shipping these out on Monday/Tuesday! So please pay before Monday so I can ship everything at once ^-^'

Thanks for looking guys and stay awesome!
Btw - I'll be shipping all packages from my last sales and all already paid for McD figures TOMORROW! ^o^

Hi! As most of you are aware, Lousiana has it pretty rough right now. :( being a Katrina victim myself, I really feel called to donate so 25% of each purchase will go to people trying to get their lives back on track. 💓 Got lots of plush up for grabs :3

I have 3 cats but my home is smoke free

I include a free Pokemon card per order~ 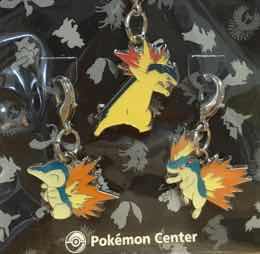 I just received my latest shipment of stuff from Y!J, and got to unpack a thing I bought on a whim. I had no idea what it was from its vague description and tiny photo, but noticed it had the Pokemon I collect on it so I decided to buy it. Now that the thing is in my hands and unwrapped, I still don't know what it is. Does anyone here know?

This image is printed on some kind of tarp, and it's huge! It's almost 4 feet by 6 feet (1200 mm x 1800 mm). It's from Advanced Generation, and features every Pokemon up until that point in roughly numerical order from left to right. It doesn't say the manufacturer in the corner, and the reverse side is simply white. It did come MIP, with a sheet of paper with some info on it. All I gathered from that was that it's made of polypropylene, but my Japanese isn't very good.

What is this tarp thing? Who made it? My best guess is maybe it's a kids' mat used for hanami or something, but I really have no idea. Any help is appreciated.

More pics under the cut:
( Collapse )

The verdict: General consensus is that I have a picnic/leisure mat from Seibu Department Stores! After doing a bit of digging, mine seems to be unusually large for this sort of mat... But it definitely appears to be one. Thank you for the help, everyone!
Collapse