Hello all! Long time no post. I come with tons of gets and plenty of new things in my sales! I got a full time job that pays incredibly well, so now I'll be able to afford some more wants of mine now ;v;

( Collapse )
And for my sales; follow the link! http://giratina.livejournal.com/3599.html
Items and info are over there.
There's zukan, plush, kids, tomys, and more. 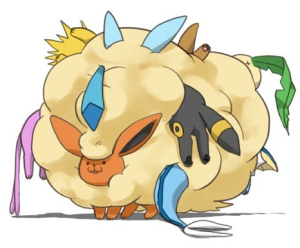 Hello poke lads and lasses! Quick post here, I have moved my sales to a new link as the comments were getting to long and bogging down the load times (I couldn't even get it to load on my phone! lol) Come take a peak if you haven't already, I have lots of nice items including eevee items, espeon items, helioptile items, mega bloks, figures, a bunch of deoxys items (which I would gladly make a deal on all of them together if there is a doexys collector out there) and more! Cheers!
http://pmxellos.livejournal.com/4075.html

Yooo guys !
It's been a while :3
Just to say I really like the atmosphere in this community it's not the same as on facebook. I really Hope I can get Sales permission one day :p

Here's a bit of info on me :3 I'm in my last year of Bachelor's Degree in Applied Linguistics , Multilingual Communication and Translation ( In order to become a video game translator ) , after this year I'll enter a Master's Degree for the same thing :3

Maybe some of you know me from the UK pokemon Tcg Group on Facebook ? I've been hanging there quite a bit .

I am an Administrator of the 8 biggest French Pokemon Tcg groups on Facebook .

So first of all Here's some photos of my Nidoking line Collection.

Recently I've been hunting for every base set Nidoking edition /language I could find . Right Now I have 25 différent versions .

I've also sent my first ever card to PSA ! I sent my Crystal Aquapolis nidoking , hoping to get at least a 9 .

Thanks for reading :D

After that I've finished a couple of TCG series in the last , and i'm nearly finished with the most of the ones i'm collecting .

Here's some photos of the holos / ultra rares I have so far :3 !

After a little over a month of hand-sewing, it's finally done! It's a little over one foot tall, wide, and long. Made of all blizzard fleece. I do have some complaints with how it turned out, but I still really like it and I'm attached to it. ;v; This is the last time I fully hand-sew a project of this size.

Just a quick question. Does anyone have a picture of the back of the tag of a 2005 US Umbreon poke doll, or can tell me what it looks like?

I bought one a while back and just noticed the tag dose not have a bar code on the back like my 2009 and 2010 dolls. The doll itself looks legit and even has an s sticker in the tush tag. I'm worried the actual hang tag might be a fake though. It's glossier than the other dolls' tags too.
Sorry for the boring post,
Thanks!
Collapse