A friend of mine recently took me to their storage unit and passed off a handful of pokemon items to me to sell. They had quite a few Pikazard things from the Mega Tokyo 2014 Pokecen opening among other stuff. I've updated my sales with everything and have also lowered prices on any old stuff.

Prices are based off of ebay listings but reduced - that said, please don't be afraid to offer if you think a price is unfair. I was unsure about some
things - especially the zukan w/ missing pieces.
Also - I may take a few hours to reply. I have been a bit slow lately so apologies for that. 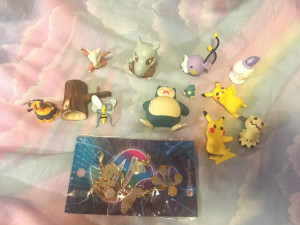 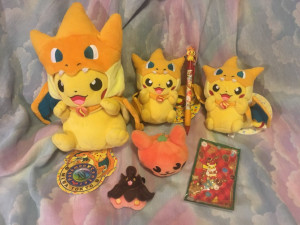 In other news, I've added a few exciting things to my main collections. 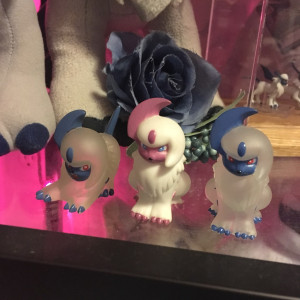 I finally have the clear absol attack kid, yay! I purchased it in a lot of other clear kids on Mercari (the others of which went up for sale in my last post). 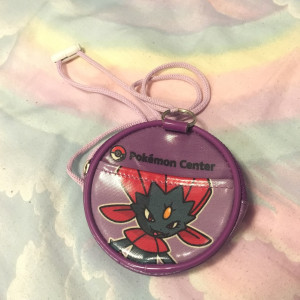 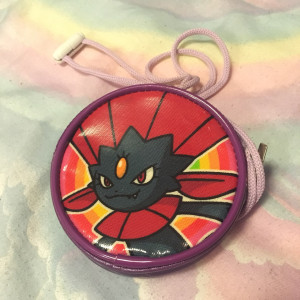 And most notably - this Weavile pass case. I had seen one pop up in a big lot on Mercari for the first time a few months back, but could not justify the cost of everything at the time. I had only a small photo of the front side at that point as well, and hoped another would come along so I could at least see it more clearly. I got lucky last week and found it for sale in a very unexpected place - a Toreba FB group.
The purse is about 4" and attached to a long purple cord. It's long enough to go over my shoulders, so I could see myself potentially using it sometime. There is a small pocket on the front.
I love the vibrant artwork - both great poses for Weavile. It doesn't have a date on it. I'm sure it was released around the Lucario movie, but if anyone knows what specific promotion it was part of, I would be curious to know.

I've been missing from the community this past year because I'm in school now in Germany but I'm home for Christmas and looking to fill in some holes in my collection.

1. Thanks to another seller, I recently picked up Brock, Bruno, and Agatha!

Does anyone have Koga, Giovanni, and Lance (Kanto) from the Kanto can badge collection for sale?

2. Does anyone have a Popplio GET mini figurine for sale (the normal one or smiling one)? To be clear, this is the tiny one with the black base with the QR code.

3. My friend flew out of Narita two days ago and was able to acquire 8 out of 9 fit plushies I was looking for. Anyone here with the ability to find me Vileplume for near retail?

Heya! I'm back from the dead again. I'm in search of someone who is planning on ordering on the pokemoncenter.com website (and willing to add something for me lol, so we save ourselves shipping costs). I'm interested in the Sitting Cuties Omanyte and Shellder. So if someone wants to order and needs about $22 to get free shipping I'm your lady (redirecting to a group buy post is also appreciated)! Of course I'd pay the plushies upfront. Shipping is to Germany.

Thank you lovelies a lot. <3

I ended up getting into crochet for about a month or two, it's been fun learning how to do it and as well as seeing how patterns and things work, these are mine that I've done, most of mine don't have patterns though as I kinda just yolo'd and made my own pattern since none of the patterns I found I actually liked haha.

The shiny butterfree and the normal one are a couple~ I made it for me and my long-distance boyfriend because he loved that episode where Ash helps his butterfree to find his mate, so now he takes the shiny one on adventures and I take my normal one on my own daily life journey so that even though we're far apart we can still kinda feel like we're together on dates and things.

(Although my butterfree is slightly salty I took his girlfriend away)

Surprisingly there was such a high demand for my lil creations so most of these have been sold... my workbench is now pretty empty with only my pikachu, gengar, rowlet and bulbasaur chillin' on it.

I've been so busy I've forgot to take pictures of my umbreon, growlithe, slyveon, espeon, charmander, and eevee >__>" so I'll have to ask my customers to take a picture of them so I can show you guys!

I still have an arcanine, cubone, vaporeon and jolteon left to do for a commission... I wonder what I'm gonna crochet after that... I was thinking maybe a a giant super-sized mudkip, though I still want to have a go at making a cyndaquil, lugia and lapras so that's definitely on my to-do list.

what would you guys wanna see?

Hello, I have added a few new items to my sales post! Go check it out :)

I was granted sales permission on 4/5/14 by allinia. and my feedback is http://feedback.pkmncollectors.net/feedback/view/haepbrosonearth/

To be transported to my Ultra Super Weeding Sales Post, you can click here or this link (https://haepbrosonearth.livejournal.com/4209.html) or on any of the preview pictures! 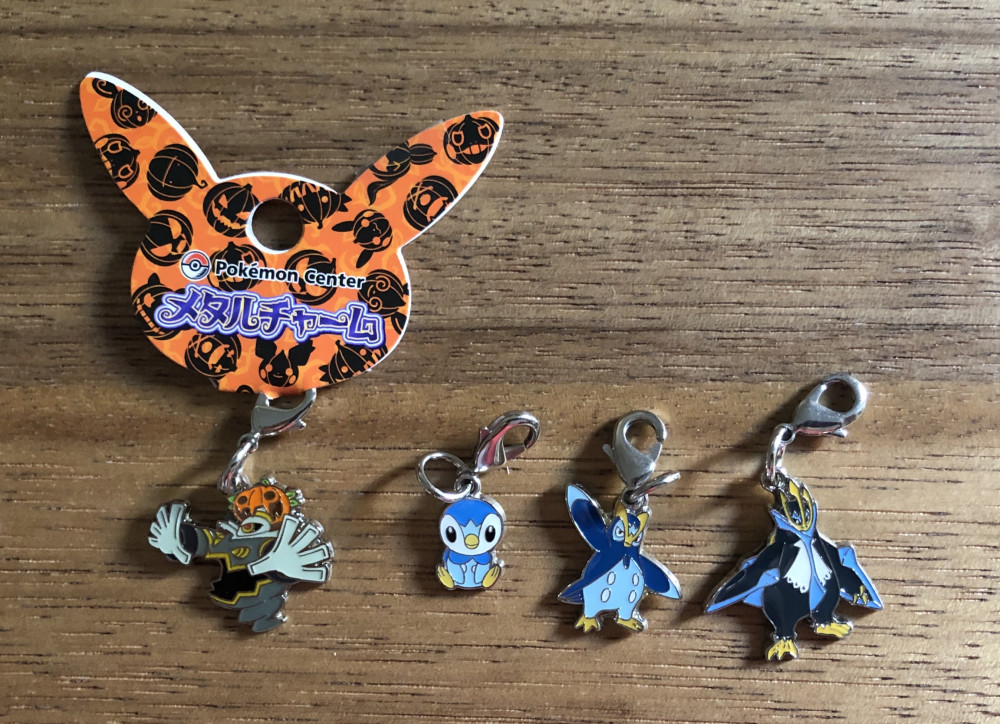 Hello all! I'm proud to say that I was granted sales permission about a week ago!! So I've made my permanent sales post and you can check that out if you'd like! 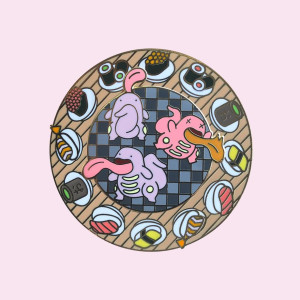 (Not my photo, I couldn't get a good one without there being a glare!! ;A;) I got my hands on one of these Lickitung sushi-go-round pins from the artist that runs justpeachyy.com! It spins and lets the Licki bois inhale the sushi. I missed like 3 sales and 2 pre-order periods and FINALLY got him!!

That's all for me!! Until next time~ 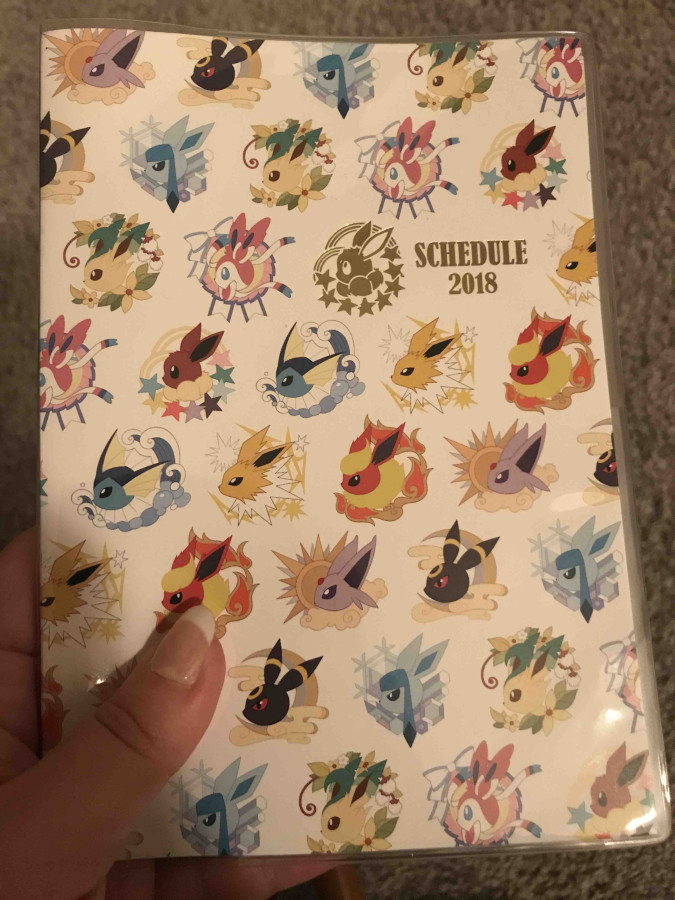 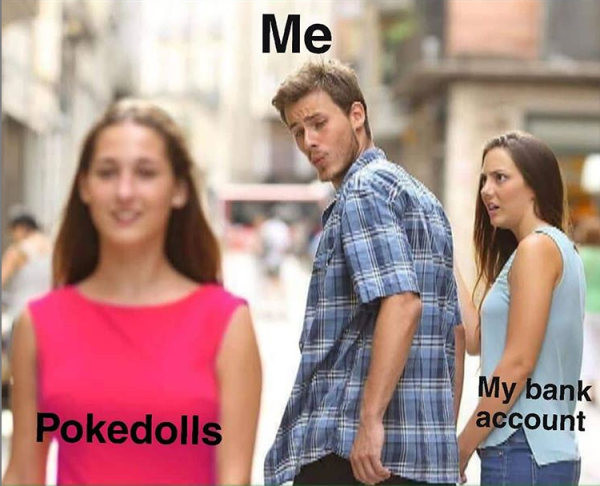 I can't believe it has already been a year since the last poll!

If you're new to the community, this is just a set of questions for those who collect Pokedolls, where they can see how there collection and tastes have changed over the years.

I know the Pokemon Center has had some new Pokedoll items out since the last poll, so I tried to edit some questions that fit both old a new Pokedoll merch. Feel free to suggests any new questions as well, though I feel like I have hit every base possible with them!