Hey everyone, I have another restoration to share! I recently bought an adorable 2001 JP McDonald's Pikachu plush from

shiny_vulpix and decided to fix them up~ <3 Check out the process under the cut!

Hi everyone! I added a couple things to my sales. Please have a look when you can!

So today I wanted to get opinions on what your ideal bedtime buddy or travel buddy Pokemon plush would be. As of right now I don't currently have my own for either purpose--I don't travel far from home often and I just haven't slept with a plush since high school lol. But my ideal bedtime plush would probably be a large plush with fluffy material for soft cuddles. For a travel companion I think Poke Dolls and other small size plush, maybe even plush mascots are perfect since they can easily fit into purses or bags and quickly taken out for travel photos.

If you have a bedtime buddy or travel buddy plush, please post about them! I'd love to hear your stories on how they came to be your buddy for whatever purpose they're for ^^

I should really rename myself to Kid Procrastinator. I've been wanting to get my collection out there for years but kept putting it off! On and off over the past months, I've been working on getting my very own Gengar site going. Today I bring you guys a site dedicated entirely to the Shadow Pokemon, shadowyfiend.com!

I'm happy to finally have a spot for everything, even the little things! I also wanted to get the site up because there's things I want to sell off. I'm not really getting too many things now except some main releases. I'm pretty much soft-retired at this point. I still want the things I sell off to have proper documentation on the site. I want to update the site at least once a week if time permits between work and studies. Over the weekend, I just took pictures of the first things that caught my eye but upcoming pictures might be more obscure and random stuff that I plan to weed. When I sell, it will be here on the community first and then everything might go to Mercari. I do not plan to sell on eBay as of this time.

The logo for the site that's on the pictures is my very own Gengar, Machete! He has markings based on the tribal Gengar from the anime and notched ears and fangs are my own touch. I named him after my grandfather, who would cut his own grass at age 80 with a machete. My grandpa also gave me my very first Gengar plush as a kid and here we are now. I definitely want to get custom work of Machete later on to put on my site when funds permit.

My retired Darkrai collection will also be on the site but I want to prioritize Gengar for now since there's 6 years worth of stuff I have to dig through.

I have not had any grails in a while until this. I never thought I would get this grail of mine! The DS Studios Gengar line zukan! So happy to own this excellent unofficial custom work. I feel this was the last thing I was willing to shell out for in the hobby, haha. 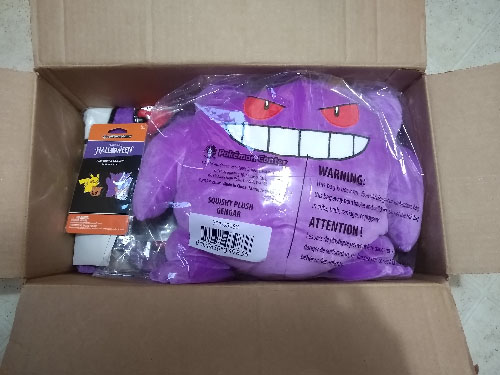 Much bigger pics under the cut.
( Collapse )
Thanks to all who have ever helped me in my collections! I have been silent the last few years doing my own thing and I SUCK at social communicating (funny enough, I already sucked pretty bad at that lol) but I appreciate you all and I hope you are all doing well in your lives and the hobby.
Collapse