After some weeks of searchments and looking on kinda thousands of different websites in many lanuages, I can't find out more about this figure. 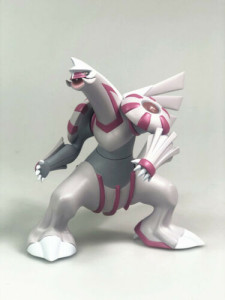 I am wondering if anyone of you can tell me something about this Palkia figure, because I really want to buy it. Perhaps you know where I can get this figure? I don't know. Any information is really helpful for me!
Thanks for reading~

Hello all! I hope everyone is staying safe during these difficult times. I'm just here for a small, informational update regarding the subject of this post~

Some of you may remember that I had been on the hunt for exclusive Hokkaido Alolan Vulpix items that were released late winter last year. I was eventually able to obtain what I wanted through Buyee, and made a post about them several months ago here. The highlights of that post were of course the ceramic music box and plush music box of Alolan Vulpix, both of which I've posted videos of ^^

Well it was not long after I got those items that I discovered that there are actually three possible songs that the ceramic music box can play. Both music boxes that I got in that post play Waltz of the Flowers. The other two possible songs that the ceramic music box can play are Over the Rainbow and Pachelbel's Canon. I found a Japanese Instagram user's video showcasing their Alolapix music box playing Over the Rainbow and I knew instantly that I really needed to have a music box with this song, as it's a song I'm more familiar with due to The Wizard of Oz. And later on it just so happened that the company that creates these music boxes started selling these on their online website. A BIG thank you to whomever it was who posted about this in the unofficial PKMNCollectors Discord! I was very busy at the time this was posted in merch news, so when I was finally free a couple of hours later I went to the website and found that all the music boxes had sold out xD; I doubted that they'd restock anytime soon, but the small hopefulness in me kept visiting the site and there was eventually a restock! So I quickly sent WakuWakuMono an email asking for their help in purchasing these, along with a couple of Mercari items (which I just now realize I forgot to take photos of- oops!). They were able to get me two of these ceramic music boxes which made me really really happy! Of course, I knew getting the song I wanted would be completely in the hands of RNGesus, as the site did not enable customers to select which song to get. I don't know why the company did this, as it makes no sense to me. But regardless, I was willing to take the risk.

Fast forward to this week, I get my WWM package! I open up the first ceramic music box I picked up and what do I hear after winding it up?

Over. The. Rainbow. If you think I was really really happy with this, keep reading-

So yes, I couldn't believe that I actually got the song that I wanted! I was overjoyed as I listened to the song. It's a very beautiful melody (':

At this point I was like, 'I guess I shouldn't care about the 2nd music box in this order because I already have the song that I want.' But curiosity got the best of me and I carefully opened up the other. What do I hear from this one?

Pachelbel's Canon. I honestly do not recall ever hearing this song in my life, but upon listening to this music box it is instantly becoming a song that I really like.

So now, I have three Alolapix ceramic music boxes, one for each song xD This was UNINTENTIONAL! I had NO idea I would end up lucky enough to have all three songs. I was pretty much exploding with happiness when I realized this. My original plan was just to try to get Over the Rainbow, and if I did or didn't get it I'd just sell off whichever two music boxes I didn't want to keep. But now I'm undecided. I like the melodies of all three songs, but Over the Rainbow is the one that's more nostalgic for me. I like Waltz of the Flowers but I already have the plush music box for that song. And Pachelbel's Canon is just very pretty to listen to and gives off a different mood in contrast to Over the Rainbow. I really don't need more than one ceramic music box, but I've also considered just selling Waltz of the Flowers and keeping the other two for the sake of having one of each song. Needless to say I'll be thinking hard about what to do with these for a while.

Thank you for taking the time to read this, and I hope you all enjoy the videos I uploaded of the songs! If you're curious about what I got from Mercari, the main item would be the Alola Rokon x Snow Miku blanket. I've left it on my dresser since opening my package and have yet to inspect it all because of the excitement over these music boxes xD