many work gets, and Reshiram figure help!

Hello everyone! I have gotten a few new gets, but most importantly I have a huge project I plan to be working on, but I have several questions reguarding it.

You can see where this future project will be going to.... 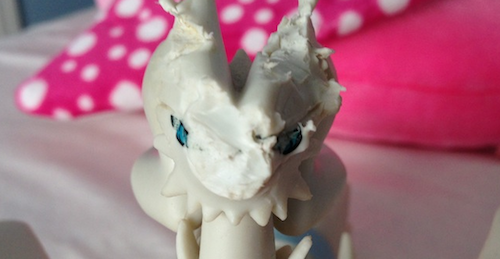 Well, I'm gonna tart with this box from SMJ a few weeks ago. I used the rick and morty DVD to cover my address XP

Both are the litle blue birdz!

Secret Base Swablu Pokedoll and PokeCen Altaria! I needed Swablu to complete my secret Base pokedoll collection, and she happened to be the only one listed on Y!J at the time, and beside Altaria. I decided to get them both together.

Here she is with her Secret Base friends! I have Altaria with the pokeCen gang, but I forgot to take a pic ;_;

kitzune's pickups! I really love her. She's the first and only Meganium plush in my collection <3 I chose her as my starter in gold and HeartGold.

All the stuff from

skdarkdragon!! My bff is a MAJOR halloween nerd, and as soon as she saw the halloween pikachu's, she had to have em, so I middlemanned them for her. Basically, anything pikachu related is hers, along with Mega Altaria. She saw mine, and wanted one too xD I even forgot that she ordered the Artists monthly Pikachu, I'm normally good with keeping track what I order, but this one slipped my mind ^^;

The Flareon Kuttari, Umbreon Pocketwatch, Wailord Petit, and Drifloon hat are mine!

Okay, Flareon is my most disliked Eeveelution, however, I fell in love with the design of its Kuttari plush when i saw it online after it's release. It was vibrant, and he was adorable, so no regrets!

Pics of this watch does no do this watch justice! It was pricey, but so worth it! <3

I was expecting it to be half the size that it is, but it was much bigger then my expectations, and the details!!

I got creative and wanted to feature the pocketwatch in a piece of art, so I did.

You can see it on dA here :D

My frends texted me since one of them wanted to do a yu-gi-oh card run. We went to Target and I wanted to show them Smoochum, and brought her along. Here she is with the pokemon cards!

Good thing we did, because they had the opened mouthed Tomy Mudkip plush in stock <3 They had all 3 starters. my bff got the Treecko!

Time for the many work gets!!!

This is the first thing I came to in the morning when I just started my shift. My Co-worker put this HUGE Hasbro pikachu on my computer.

I'm glad I was able to bring him home with me. Plush around his size instantly get thrown away beause they never sell.

Here he is sitting in a chair in the secret base. I named him Nugget :D

Another co-worker gave me this!

THIS TREASURE! THIS BEAUTIFUL TREASURE!

This gave me nostalgia. I used to use Cassette tapes when I was younger, even when portable CDs were out, even during high school.

The package isn't in mint condition though. the plastic has yellowed due to age, and it appears to be torn, but the cassette tape is in pristine condition!

These would've been thrown out since casette tapes aren't used this day in age anymore :/ They let me get it for $0.29 :P

I had to get my old walkmans to try this, using an old tape I don't use anymore, but they all died D:

Except my old boom box :P hahaha I'm going old school. I still listen to cassette tapes to this day!

Books, a magazine, and a folder. The folder has Meowth on the other side.

Manga, a book with missing pages, and some pokemon worlds 2013 cards!

Charmander! my bff's brother decided to buy it.

I was given these a few days ago. Unused pokemon tattoos. I never plan to use em, ever.

The last thing were these pokemon stuffs! Leafeon and Pikachu are obvious booties, but the pokemon figures, pokeball plush, and cup are legit :P

I did get a DSi and Game Boy Advance SP too.

and I LOVE Kyogre. His mouth moves! Here's the video of it!

Then the last thing from these gets, and featured picture is poor Reshiram ;_;

Now I do plan to completely reconstruct his missing body parts that were chewed off, using Instamorph a moldable plastic.

My co-workers really wanted me to toss it out, but I felt that he'd be a great project! though this is the part where I do need help and photo refrences with measurements... if anybody has the time to take pictures of the body parts with measurements, it would be really appreciated!

I'd also need to know what materials do I need for keeping paint on plastic? What is your reccommendations?

He's a Jakks Pacific Deluxe figure (he is rather large) for refrences!

The poor thing ;_; it looks like the previous owners of this figure had a new puppy or some sort of small dog, because the damage is unbeleiveable!

Mostly the damage went to the front part of his body. His backside remained untouched.

One wing has a few bite marks, but I may keep those on. He has battle scars!

Now we see extent of the damage. His poor face is all chewed up, so is the top of his head.

(For pics, I'd like to request the front and both left and right side of the face for a refrence)

The left side of his face ended up with the most damage.

And his feet are completely gone ;_; The poor thing.

(For pics, I'd like the front, left, right, and backside view of them, so I know how to mold the plastic.)

And last, but not least, his fingers... but I don't need refrence pic for those, because I can copy the ones on his left side.

And that concludes this collection update. Thanks for reading everyone!!