I'm Punkie and I've just recently joined the community. Been a Pokemon fan since the very first games! I'm also an artist and animation student who's working hard and building up my portfolio in hopes that I'll land a job in the industry (fingers crossed! I may end up having to move to LA all the way from Florida haha).

Moving onto the other point of this post: THE COLLECTION. Here it is in all it's small glory- 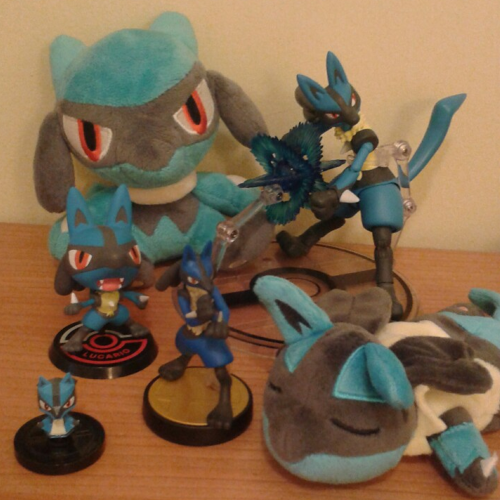 I collect Lucario! I also want to start a Sceptile collection since it's my other all time favorite pokemon. I'd super appreciate anyone pointing me in the direction of more stuff of either of those (if you got sales I'm interested!).
I've also got a small list of big wants that I've been searching for for a while that I'll shove under a cut

That coveted minky Lucario pokedoll. I've been searching for one for years but haven't had any luck in finding one. A Pokemomo promotion lucario plush. The cutest little thing with that rose

A Sceptile pokedoll! As far as I know, these never got released again outside of 2005 so they're pretty rare (correct me if I'm wrong).

A 2-way bag from the Pokemon Mystery Mansion promotion from back in October of last year. I was almost able to get one but ended up getting my money stolen by what seemed like a reputable ebay seller (longstory short, paid the person, person then went silent for months and never sent me the item). The only places I've seen that have one for sale have them very overpriced.

And ah, that's about it! I hope everything is in order for this first post of mine