Hi comm! Wow! The 20th anniversary of Pokemon is nearly upon us huh!? So excited!

In fact...I'm so excited (especially about the New Nintendo 3DS Sprite faceplates (EKANS!! ARBOK!! NIDOKING/QUEEN/RINO/RINA!!!) that I've decided to take the plunge and upgrade my old red original console to a new one so I can rock the 20th anniversary awesomeness whilst I game! Of course this means I have to replenish my lost money and so I've placed both my old console (Since I can't advertise this on the comm, look at my other listings if you're interested in the console!) and an original copy of Pokemon Yellow version up on eBay to make some funds!

To keep things all comm legal...
-Sales permission granted by areica96 on March 21, 2015
-My Feedback is HERE!
-ALL Standard PKMNCollectors rules apply. I will not sell or trade with any banned members, non PKMNCollectors members or members who I deem to have too much negative feedback.
-I ship from England, UK and will ship internationally! (My eBay auctions however don't state this, if you're overseas and interested in buying some PAL region stuff, shoot me a message on here and I'll do a private sale with you and take down the eBay listing!) 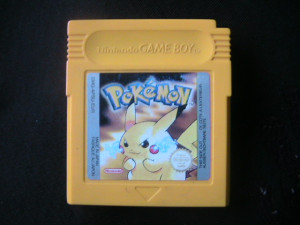 You can find the eBay listing by clicking HERE!
EDIT: Pokemon Yellow has sold but the 3DS console is still listed if anyone's interested. I'm not keeping this post up to advertise that but rather to advertise my TGC trades now! ^^

Also, my Gold Star Treecko TCG card is still available for trade with no competing offers and I've also managed to pull a M Rayquaza EX (105/108) from a booster pack I recieved on my birthday on Tuesday! =D I've no pictures of him yet but if you're interested in him, give me a shout and I'll soon show him to you!

All the best guys and thanks for looking! ^^