Hey all! :D I've been accepted to the community for a week or so but am a little delayed with my intro post! This is mostly just down to the fact I had about five parcels of little newly discovered cuties I was waiting on, and my "collection" isn't very big at all right now! So I wanted something more to talk about with you all.

SO my name is Flint, or sometimes Blits/Blitz. It varies by community so you can take your pick! I'm just a guy who has always loved critters and cute cartoon monsters, and like most people here, I've grown up with Pokémon. It's been so much a part of my childhood that my brain has more or less come to accept that they are actual creatures alongside our real life earth animals. :P My (more or less) lifelong favourites have been Lugia, Totodile + family, Charizard and more recently I've grown extremely attached to Chimchar. There's many others I really like as well but these will be the primary ones I'll collect, I think! The little orange monkey thing has some of my most favourite pieces of merch and that's mostly the reason why I've come to adore Chimchar! I love variety and personality and this little mon seems to get so many different cute poses and expressions in its figures!

I used to have a beautiful cuddly Pikachu plush in my childhood that got lost over the years and I've never seen one like it since on the internet. :( I remember it being fat, the fabric itself not being too soft and the eyes were plastic, I think? The cheeks were hard but covered in fabric. I'd love another one sometime if they exist! My dad won it for me many years ago after a week of battling a crane machine that was 20p a go on a beach holiday in Wales. I'm heartbroken that he's lost forever but he gave me many fond memories. I also used to have this wicked little Pika that would light up and say his name when you placed your fingers on two screws underneath him! Again, long lost unfortunately but very significant in my memories.

Other than those, I've had a couple of other toys that survived the years and are still with me now! But I've never been super big on collecting the little monsters until lately discovering quite a few little bits of adorably moulded plastic I feel I just need to have one way or another. :P Thus begins my Pokémon hoarding journey, I guess! I'll tell you about the couple of toys I've had for a while. 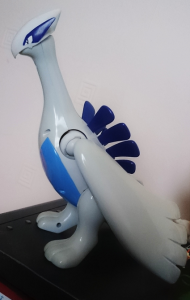 First up is this fella, an electronic Lugia, who've I had for a few years! He was given to me by my friends who spotted him in a charity shop, apparently. I love his dino cries and flappy wings! ;u; I've seen a few of them online so I don't think he's rare by any means but he's truly a treasure to me! 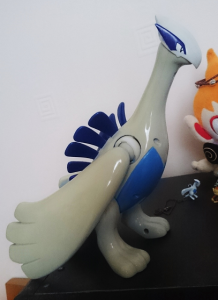 As you can see he's not in the greatest shape though, most noteably looking somewhat greenish-brown along one side due to sun damage. I've had a little look around and this seems to be a common ailment with these guys.
I'm going to conduct an experiment with removing the sun damage and attempt to turn him white again. :D If successful, would a post with the procedure be suitable and interesting for this community? I'd love to share the results with you! Does any kind of “collection care” or “restoration” tag exist? I'm quite into cleaning up and restoring figures so if it's acceptable, I'd love to post about that sort of thing from time to time and offer tips as I discover them. I feel it'd be nice to contribute something like that to the community, if possible! Please let me know! 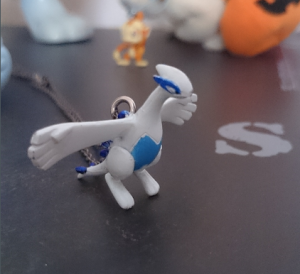 Another Lugia is a charm that I've had longer than that big fella! This one is teeeeny! I got it many years ago from a 20p machine, and got Lugia on the first go. :D She's been worn around on my phone, as a necklace and even swung off my guitar but now is allowed to rest on my side with my other figures to stop her little tail and eye fins from getting any more chipping.

These three are of course very recent. My mom has noticed me getting back into Pokémon and surprised me with them last christmas. They look like a hip-hop group, haha! I adore them!

Now for the Chimmies! It started with me spotting this adorable little halloween plush at a comic con. I bought him for my boyfriend but he joked about how attached to it I seemed and told me to keep it. This little guy went on holiday to NYC with me recently. He's a great travel companion.

He's had a bath and been all spruced up since his adventure in the big city though. 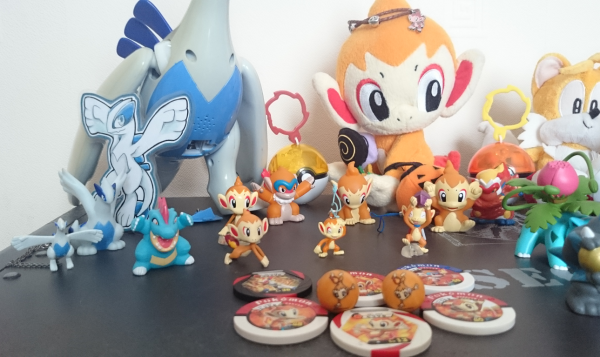 Here's how my modest little collection looks now, the beginning of an army of little Chims, and a smaller Lugia flock. My lawd, they're just so adorable. The little Chimcharms are my favourites so far, just look at all that personality! I can't stand how cute they are! ;0; Almost all of this little lot was an awesome find from eBay recently from a really lovely friendly seller, so thank you to them for kick starting my collection! Also thanks to

ku_bek for the little kids! I can now say I've started a Feraligatr collection with that one little dude there!

I have a few TCG cards too and that's where my Lugias and a few Charizards lie, but I won't post them for now. :P I've got an amazing Charizard hat that I picked up in NYC too and it gets so many compliments from fans and non-fans alike, hehe.

Now, naturally, being quite a newb to Pokéhoarding, I have many wants! If you happen to have any you're wanting to sell off, hit me up! I'll only post the Chimchar wants for now as the others are probably too popular for anyone to have any laying around and the image count was getting ridicuous!

None of these photos are mine, so if you see yours here and want me to remove it, please let me know! 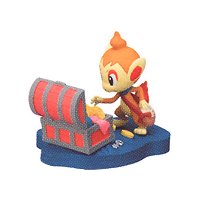 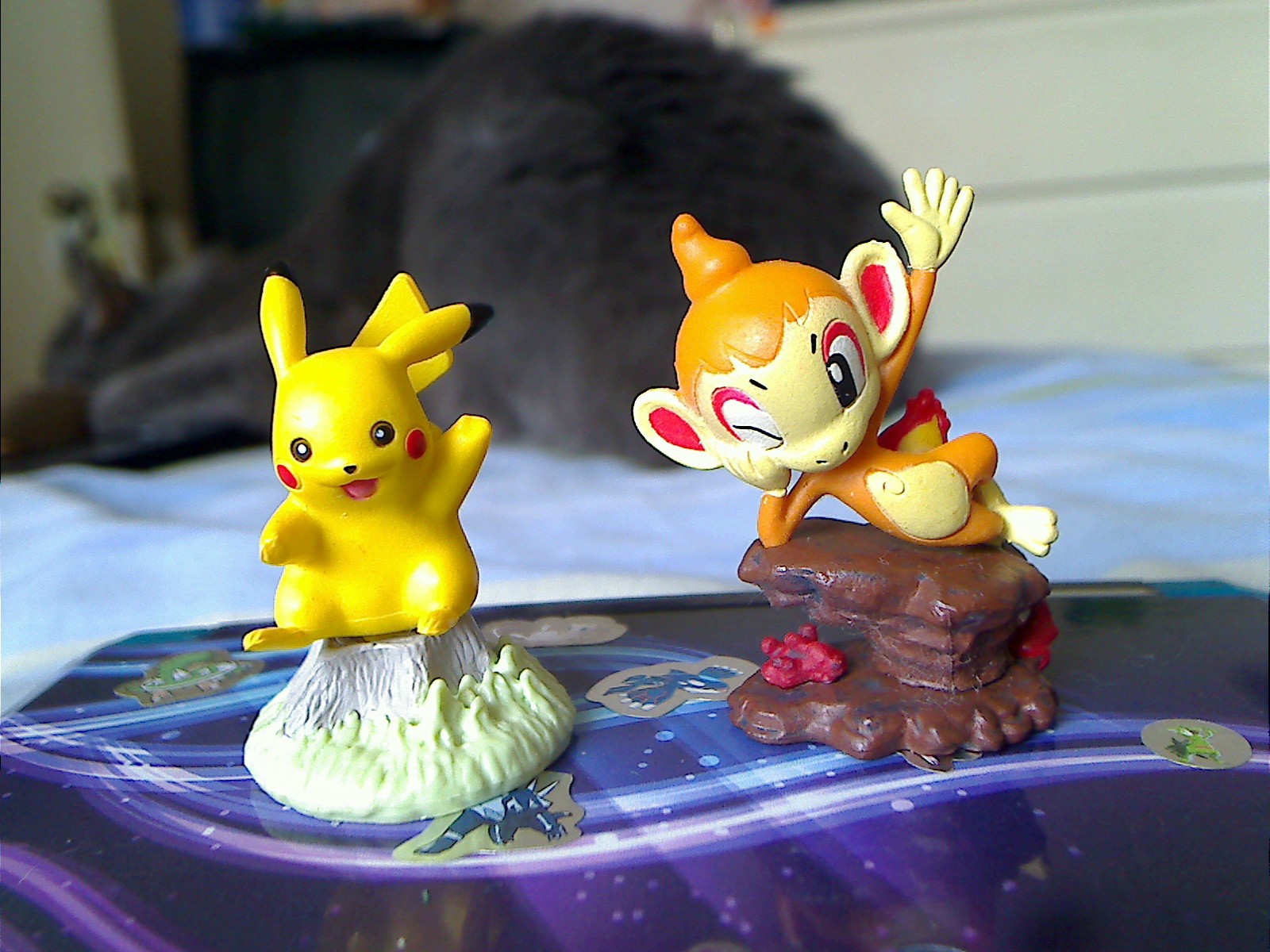 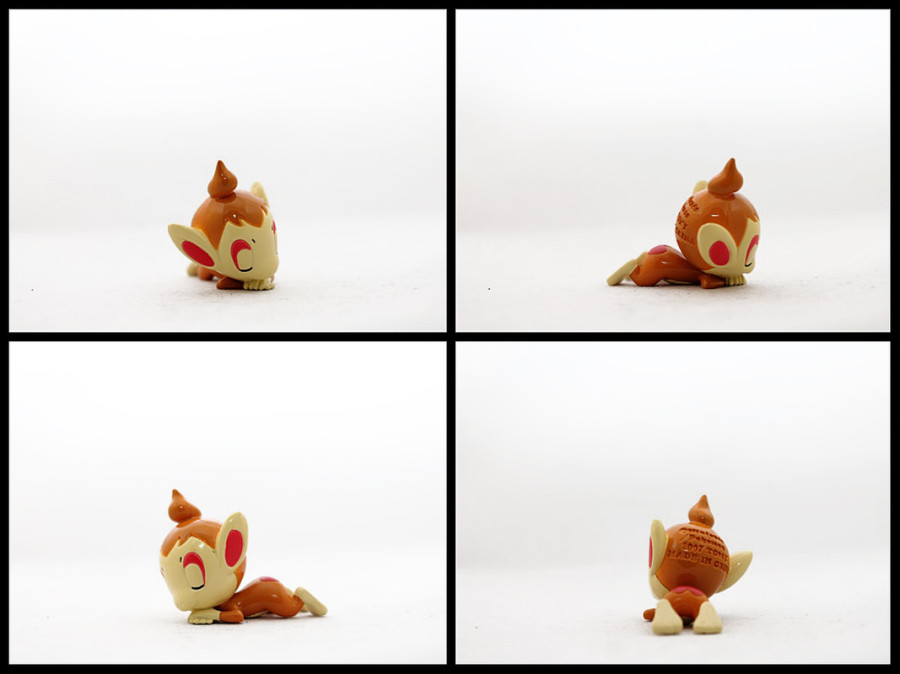 I realise that Chimchar will be the easiest of my favourites to collect since as I said, Lugia, Charizard and the Totodile family appear to be extremely popular! ;u; Trust me to have expensive/popular tastes I guess! 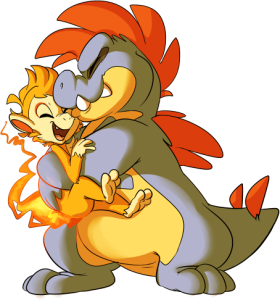 That's it for now! I hope to get to know you guys better and collect with you all. Thanks for looking at my post! :D