Hey everyone! This is my first post here ever.

I'm currently trying to complete my collection of 1st and 2nd gen authentic Tomy figures. I started collecting them in the late 90s when they were sold as multi-packs in Toys R Us and other places. I became obsessed with them and after I'd dried up the toy shops, I began buying them in bulk (but still in their original packaging) throughout the early 00s from a website I can only remember as being called "Pokemon Toys For Sale", where they were very reasonably priced (I guess they were still being sold in Pokemon Centres at the time). They didn't ship to the UK but I found a way. After that I discovered eBay... and the horrors found within... Huge bags of fake figures which I didn't think much of at first. It put me off collecting them for a long while until about 1 year ago I decided I would fulfil my childhood dream of catching 'em all (well, everything between Bulbasaur and Celebi). For now I keep them in a big plastic tub, but I hope to change that soon!

Now I've got my Pokemon collecting backstory out of the way, I've got a load of figures to talk about, so I'll put everything else inside a cut.


First things first, here are some high quality versions of the preview image I posted above.

A red X indicates a figure in need of replacing (either severely damaged, broken, or fake)
Figures I'm missing are shown with a placeholder.
The little red question marks are figures I'm unsure whether I can be bothered to replace

You may notice that there are other figures after Celebi in the last image that are not from gen 1 or 2, or are "duplicates". Anyone who collects these figures probably knows that there are new versions of certain figures (such as the Kanto starter lines, Eeveelutions and Legendary Birds), so most of those I'm after.
I also plan to include every starter Pokemon in my final collection, and a handful of my favourite figures from gen 3 onwards. There is a reason for this, it has to do with how I eventually "display" them, but I will explain a little later...

I also have these: 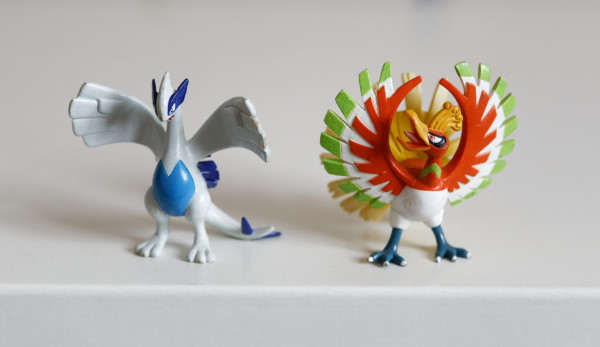 For those that don't know, these are a bit bigger than the rest of the collection, but are still considered official Tomy figures. They did however make new versions that are the same size as the rest, which I am looking for.

I don't really know why, I just like these ones the most.

Now I'll go into a bit more detail about the figures I need to replace, or am considering replacing.

Espeon doesn't even look very fake. I'm tempted not to replace it, but then, I'll always know... 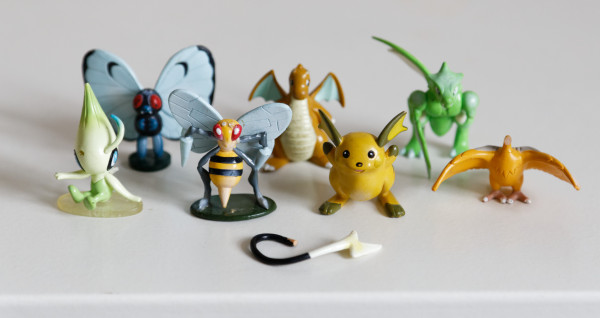 I can't bear to throw these away, but they definitely need replacing. 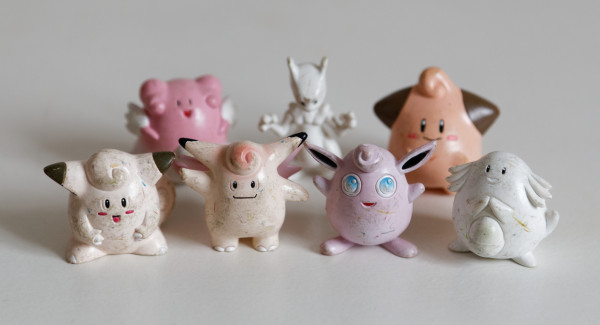 I have no idea how these got so dirty! It's always the light-coloured ones. Should I replace them? Maybe not the rare ones. These are weird. I remember buying most of them in shops (in weird packaging), so can they be considered true fakes? They don't have the same Tomy stamp as the "Authentic" ones, and the paint work is sometimes slightly worse, but their shape is totally fine. I'll probably replace them. Has anyone else come across these? The Magneton on the left is authentic, but is sadly bent in a way that it won't stand up :( , I've tried using hot water to bend it back into shape, but it hasn't worked. Any suggestions? Magneton is rare, so I'd rather not have to replace it if possible. Venomoth is also a bit knackered, but easy to replace when I get around to it.

Finally, here are some other figures I have that I think are cool, but don't plan to add to my final collection: Speaking of "final collection", this is what I hope to do with them: 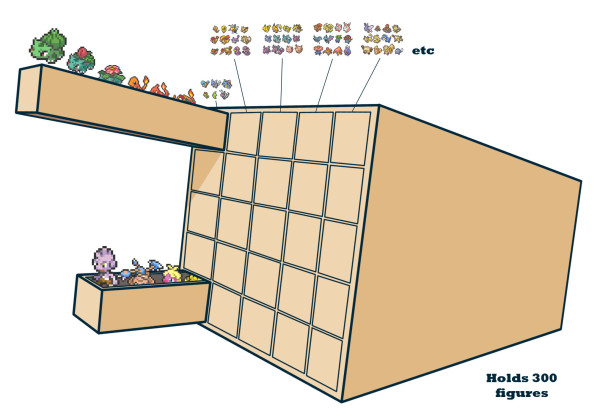 So, all 300 of the figures I took photos of with the black background would fit in this box. The box would consist of 25 little draws, each holding 12 figures in Pokedex order. Obviously I would need to custom-build this box, which would be a huge challenge, but for now I am only worried about completing my collection. I'm not sure whether I want to build this box from wood or clear plastic.

The reason for wanting to build a box like this is that I don't want to have to deal with dust building up on the figures, or worrying about them falling over if on display on a shelf or something. The thing I like most about these figures is holding them in my hands and admiring the little details, and having them all catalogued in this box, without worrying about dust or them falling over just appeals to me. It would also be more portable.

So that's my entire collection! Or, it was, but then right after I took all the photos of my collection, I went to Insomnia 61 (a gaming festival in Birmingham), and managed to find these, all for £2 each!! 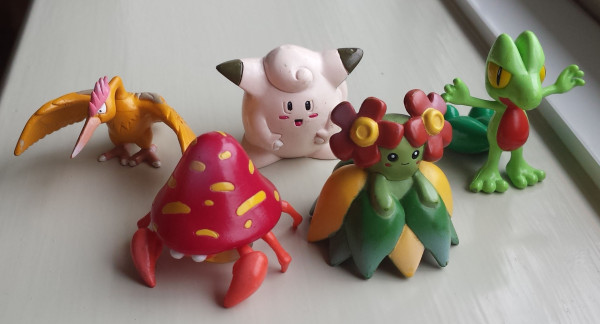 With all that out of the way, I hope you enjoyed looking at my collection. I enjoyed having somewhere to blabber on about it. I hear this place can be really good for completing collections like this. If there's anyone reading this who is also selling these figures, or knows someone, please let me know! :)

Although none of my figures are for sale, I have a few authentic duplicates that I would be willing to trade once I meet the requirements to trade here. These are: Goldeen, Weezing, Cyndaquil (old version), Quilava, Heracross and Exeggcute. Happy to post photos if anyone's interested. (I also have a whole load of other figures, real and fake, that I may be persuaded to trade)

Also feel free to request close-ups of any of my figures! I would be more than happy to create another journal entry with more details.