Hi, all! I haven't been very active in the comm since posting my last gets post at the beginning of the month; I hope you're all doing well! Last week was very busy, with the holiday and all, and also very exciting for me, since I received two packages I had been waiting on from ZenMarket! Considering I ordered using the cheapest available shipping, I was happy with how quickly they arrived. (One of them also turned out to be MUCH lighter than I'd expected, which is always a nice surprise when it comes time to pay for shipping!) Everything was also packaged really securely, including some flats that I had been a little worried about. Very very pleased with my first ZM experience!

There's a little bit of everything in these packages- charms, flats, figures, plush- including a long-time (admittedly small) grail of mine! Exciting! Let's take a look!

I'm splitting the images up according to which box they were in, and then by species. One ended up being mostly flats, and the other was... everything else, lol. Up first are the non-flats! 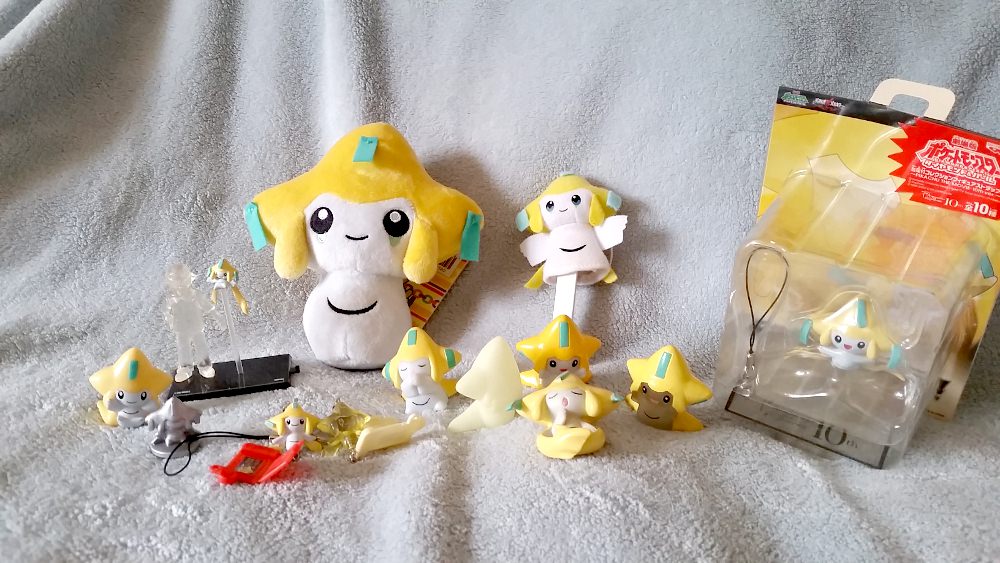 Look at all those wish tags.

This set of items includes my very first zukan! It's so cute, and good lord is it ever tiny. Given what I've heard about how brittle the clear pegs can be, I was relieved that nothing arrived broken! (The clear Ash didn't come with a stand, which is okay since it stands fairly well on its own, but its right arm is very loose in its socket and keeps falling off... ugh :1 I'll probably end up taping it in place.) The DX2 double charms are adorable as well! I forgot to take any close-up shots, but the little Pokedex part of the charm has an image of the Pokemon on its display, and it even opens and closes. Suuuuper cute. I already had the wishing and regular Jirachi kids, but the clear, sleepy, and glowing ones are newcomers! I couldn't pass up the lot, haha. 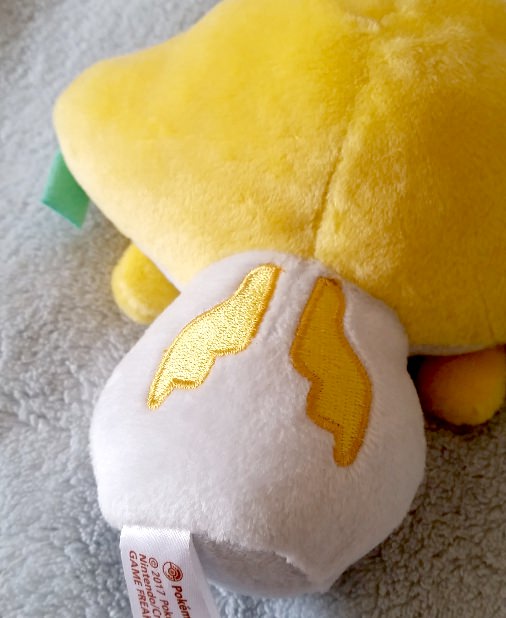 The kokeshi plush is even cuter than it looked in the pictures, but my favorite part of it might be the embroidered comet-trails on its back. They're so sweet and simple, and they're a very elegant way of incorporating the trails into the design of the plush.

That's it for Jirachi in this package! Moving on...! 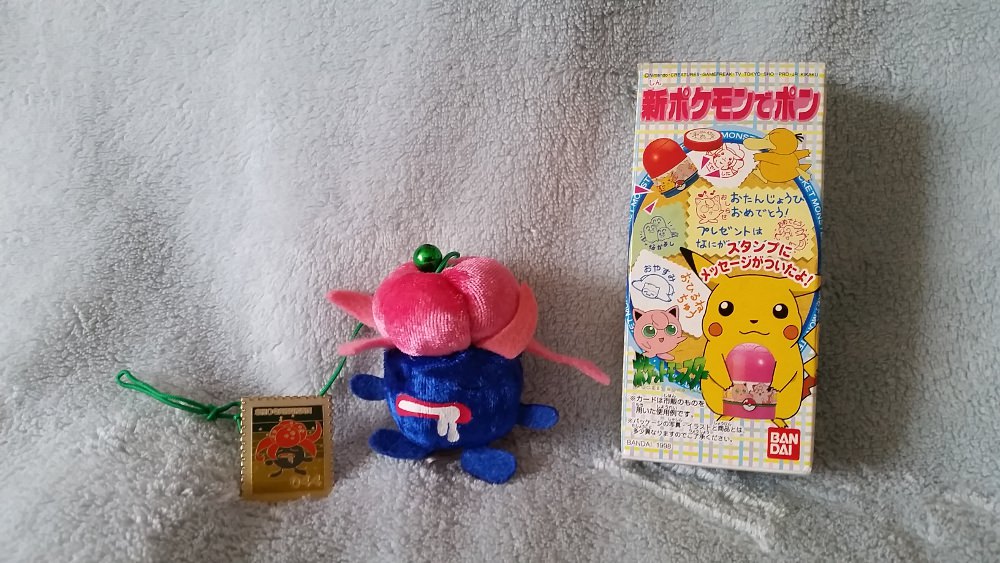 Not much Gloom to speak of in this box, huh? We've got a MIP stamper, a metal postage-stamp-style badge (I expected there to be a pin on the back, but it's actually a little clamp, for attaching to things! neat!) and...

Not a very impressive grail, I know, but there she is!! :'V As you might know, this is the first and only* official plush that Gloom has ever gotten. (*Yes, there IS a Gloom in the Ditto Transform! plush and mascot series, which I will get my grubby little hands on eventually, but TECHNICALLY those are still Ditto, not Gloom. TECHNICALLY. This is a very important distinction I swear.) I waffled on whether to buy her for a while, since she's pretty expensive for a teeny-tiny little plush, but considering how much bell plush CAN go for, it really wasn't that bad. Mainly I was worried about how long it might be before I saw another one for sale anywhere! Anyway, she is super cute and super small and I love her a lot. 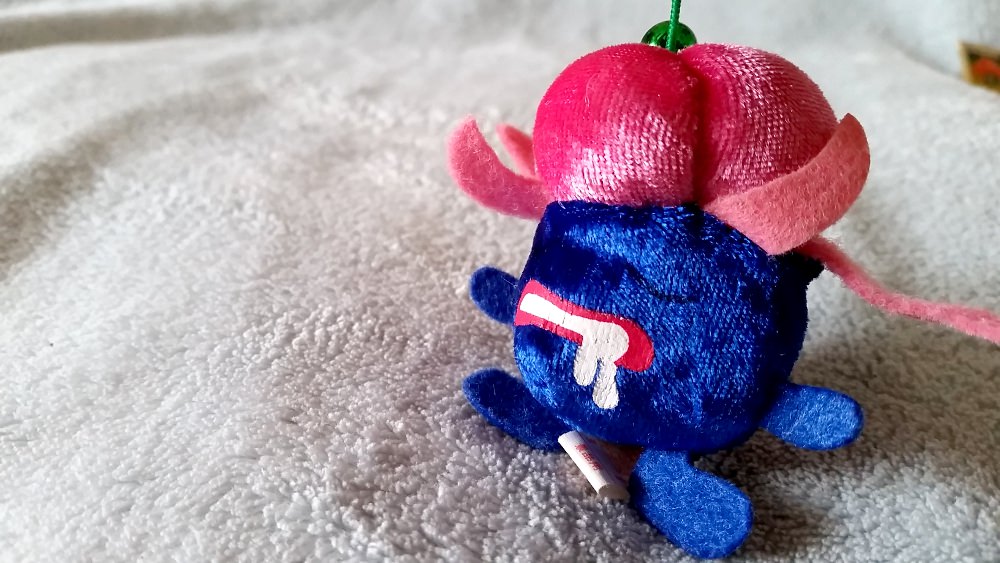 While we're here, let's take a look at that stamper, too! (I thought about leaving it in the box for like... a second. But I just couldn't do it.) 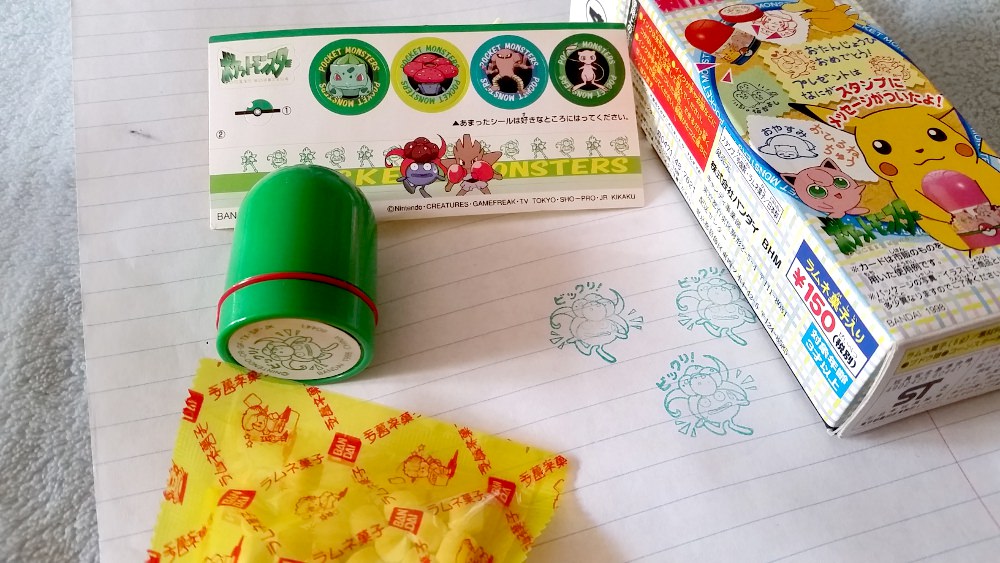 As you can see, the stamper still works and everything! I'm still not sure whether to decorate it with the stickers it came with... I might as well, since I took it out of the package already, right? But what if the adhesive on the stickers has gotten too old and they don't adhere well... :/ Still thinking about it.
I didn't know that these came with candy in the box, too! Rest assured that I did not eat it, because I am a responsible adult with a job and bills to pay and also no health insurance so I can't afford to go to the hospital for eating two-decade-old flavor lozenges. (Translation: I definitely thought about eating that candy.)

That about wraps up the first box! Now, on to the second. This time, Gloom comes first. 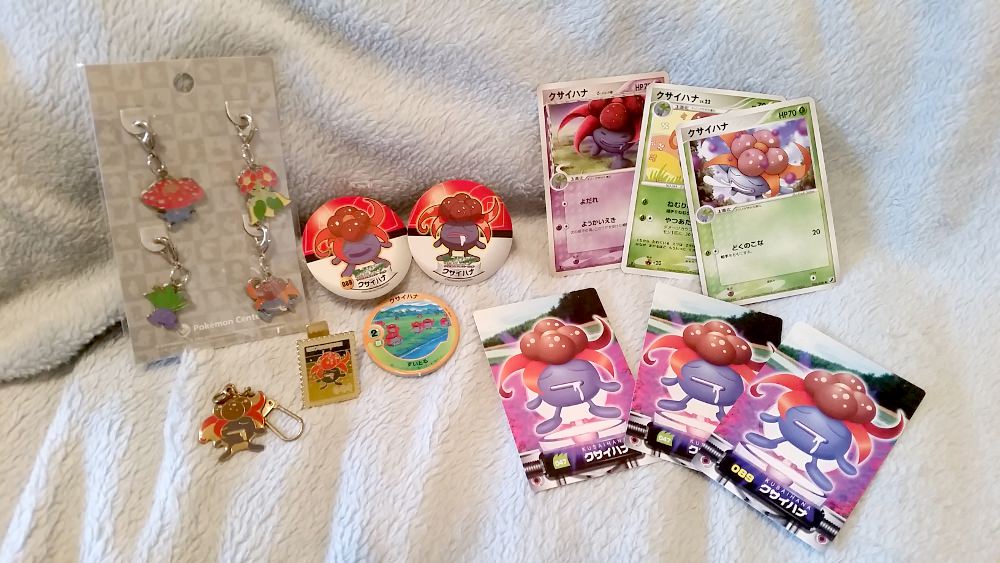 I didn't buy two of the stamp badges; that just snuck its way into the shot somehow.

The cards, stickers, and round pog/menko thing all came in a super cheap lot (I think it was like ¥60?) which I snagged when ZM was having its ¥100 commission fee sale last month. Lucky ╭( •̀ ᗜ •́ )╮ I wasn't sure if the stickers WERE stickers, so I really took the ultimate risk by trying to peel one off the backing, LOL. I love the old school metal swing charms! And I have the regular Gloom PC charm already, so I was pumped to get the running one as well. (It's nice to have the rest of the Oddish line too!)

... I just realized that one of the cards has the art completely obscured by the one in front of it. ugh. 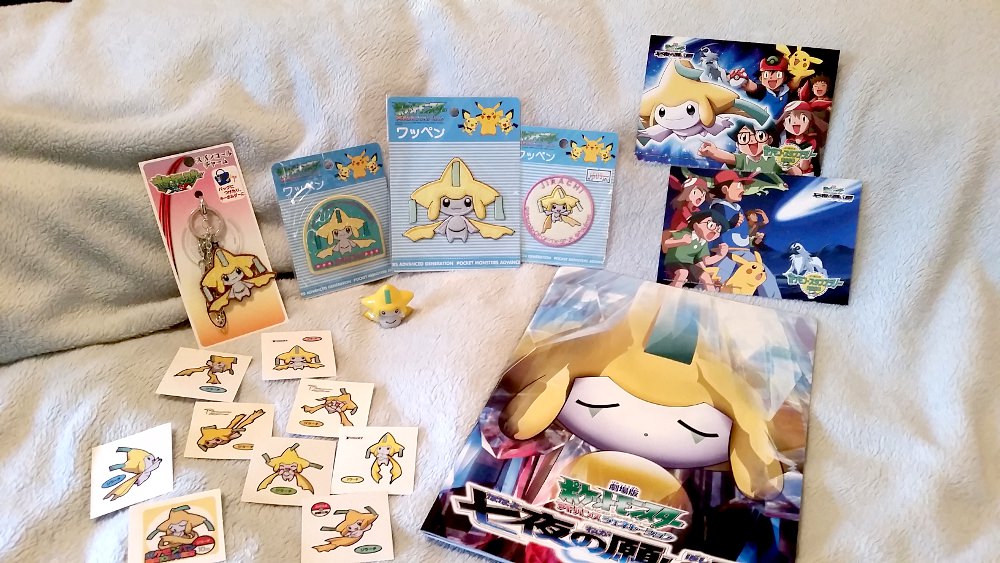 How many spare Jirachi kids do I have now...

Even more flats! On the left is a sparkly Jirachi bag charm; you can't tell from the photo, but it's an embroidered charm covered in clear sequins, giving it a shimmery appearance. (The back is covered in opaque turquoise sequins, which is pretty neat!) Next to it are a bunch of embroidered iron-on patches, which are yet another type of item that I didn't even realize was a thing until I saw them on Y!J. They're very nice quality! I also grabbed some movie-promo post cards and a whole bunch of pan stickers... as well as a pamphlet from the theatrical release of the Jirachi movie! I didn't really know what to expect when I bought this, but I'm super glad I did, it's a really interesting addition to my collection. It's a lot bigger than I expected, too, I thought it was going to be half-letter size or something! Even the back is gorgeous: 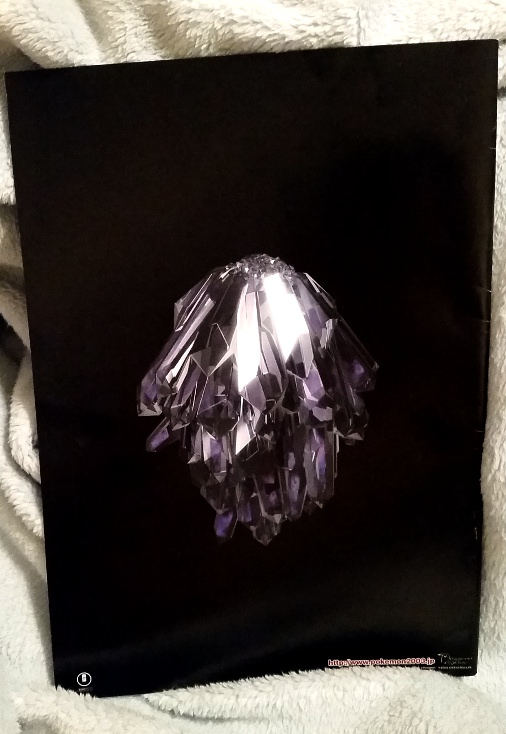 Some images from the inside: 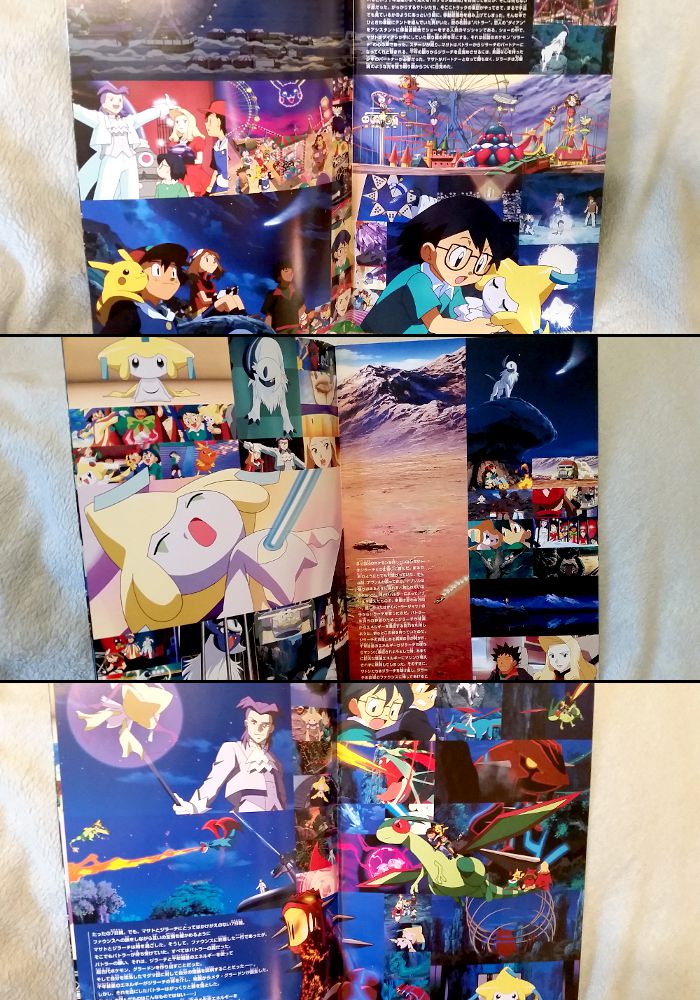 ... and the one page I wish I'd never seen, which will haunt me for the rest of my days: 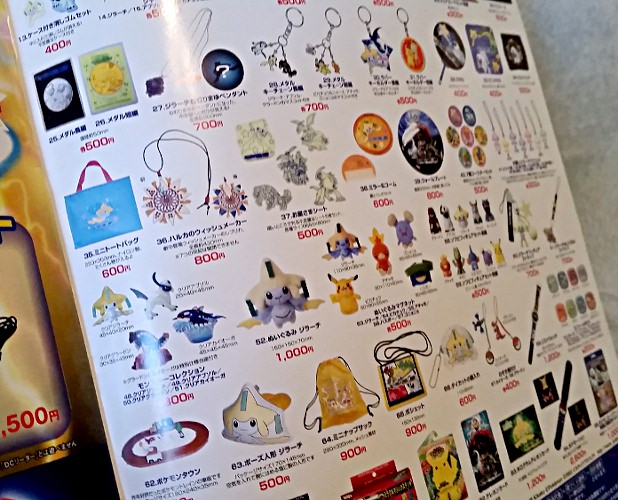 oh cool! look at all that awesome Jirachi merch that i will never own.

... And, uh, it's not Pokemon-related but these were also in the second box so I'm sharing them anyway, just, you know, in the interest of completeness. 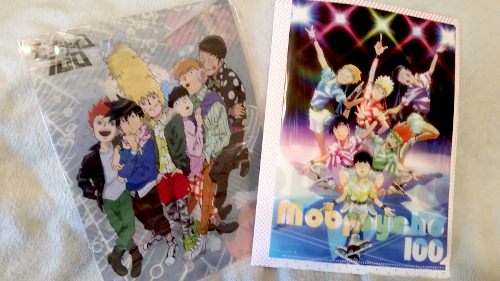 Aaaand that's it! Thanks for allowing me to share my slowly growing collections with y'all, and I hope my rambling isn't too obnoxious, lol. I'm already gearing up to order Even More Stuff from Y!J as well as the US Pokecen website (at least one of the Y!J purchases is a gift, so... y'know...), so I'll be making another update before too long. And a sales post is coming... soon. Soonish. Probably. Just gotta take some decent photos.

Thanks for reading!! Have a great week!!
Tags: collection update, gets, gloom, grail, jirachi
Subscribe