Gengar bootleg pokedoll comparison, gets, and grail get!

I'm back to share a grail get, and a helpful guide to telling the difference between a legit and bootleg Gengar pokedoll to those who were curious.

But first, a preview of said grail... 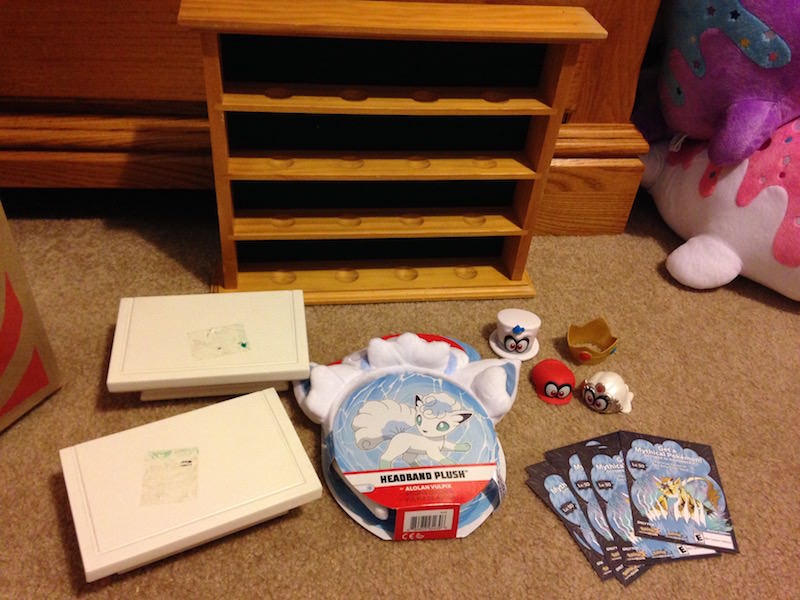 We'll start with the gets from work and Target. My local Target has been getting the WCT merch rather slowly compared to other places. I picked up the Alolan Vulpix headband <3 As from work, I got floating shelves and a golfball display for an idea that I had for a while... 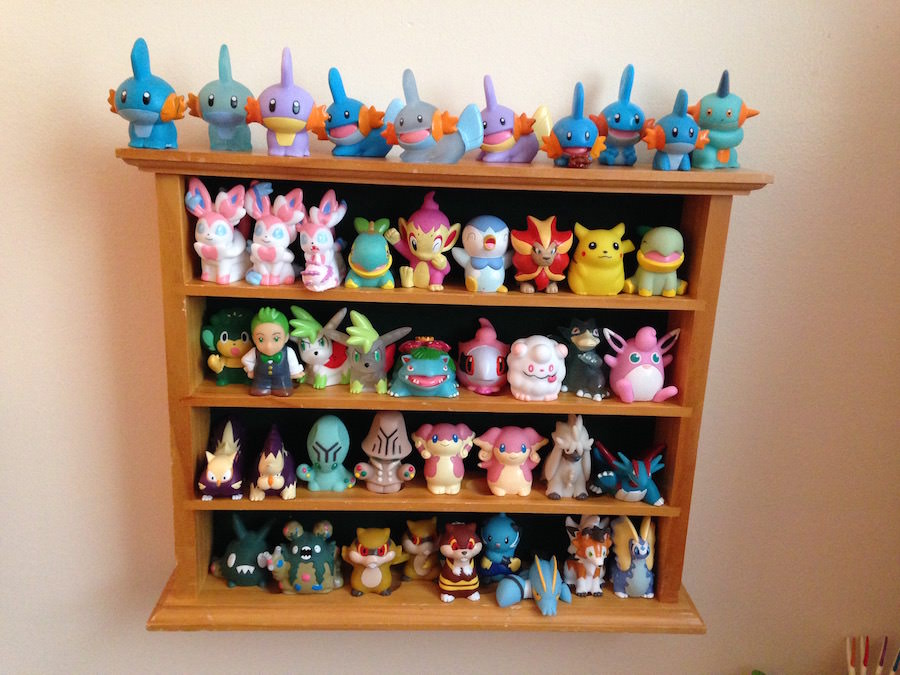 TAH-DA! Finally a proper display for my kid figures! It's been overflowing and had no more room for one more.

Mudkips are on top, cause they're special :p Their former spot is going to be a display place for Porygon-line figures. The kid figures of the porygon line are already sitting there. 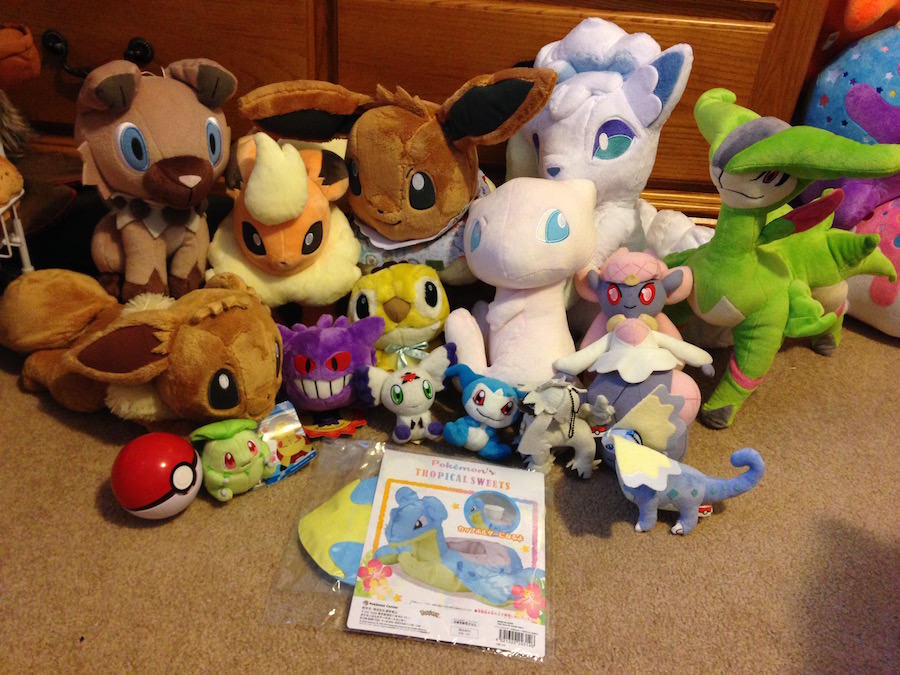 Next are gets from my middleman! I won a lot of plush for a decent price, and won it to keep the 1:1 Vulpix (named Considine), Virizion, and Flareon. After a while mulling it over, I decided to keep the antique eevee plush, since I really liked it <3 I loved the blind pokeball chikorita plush, since she was a cute little bean. I wanted to get the tropical sweets lapras drink holder, after seeing a video on twitter of a Cyndaquil riding it on a beach.

I needed a legit Gengar pokedoll, so now I have a way to share the differences between the legit and bootleg.... 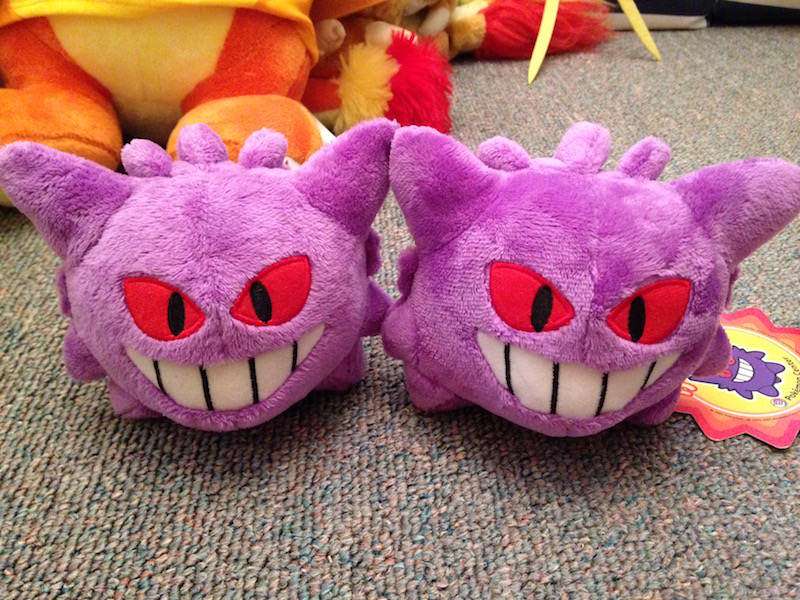 The legit one is the one with the starburst tag!

The first thing I noticed with the bootleg is the face. The eyes are closer together then the legit one. Even the ears are a pointed shape, as the legit one has fatter ears. 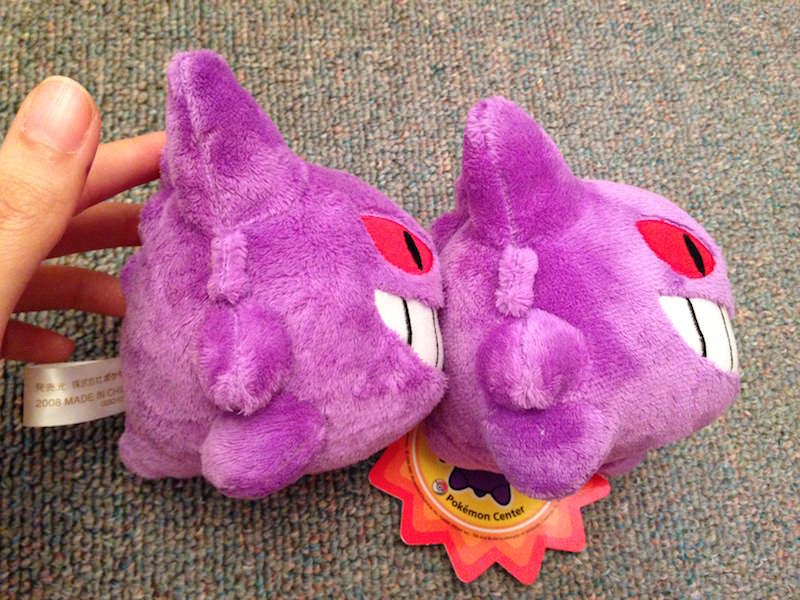 Here's where the differences are prominent. The feet are the giveaway. 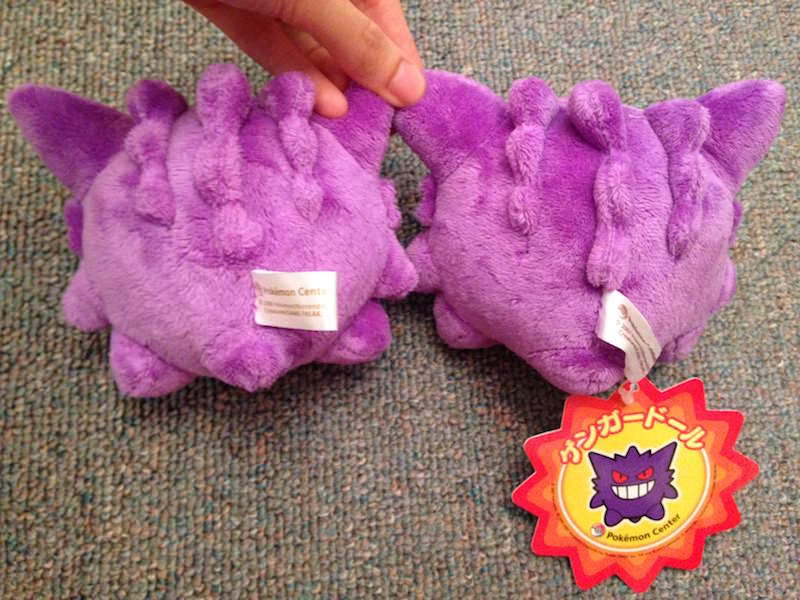 It's hard to notice, but the pattern of the bootleg has the spikes swen unevenly. The tail is pointed, instead of rounded like the legit one. 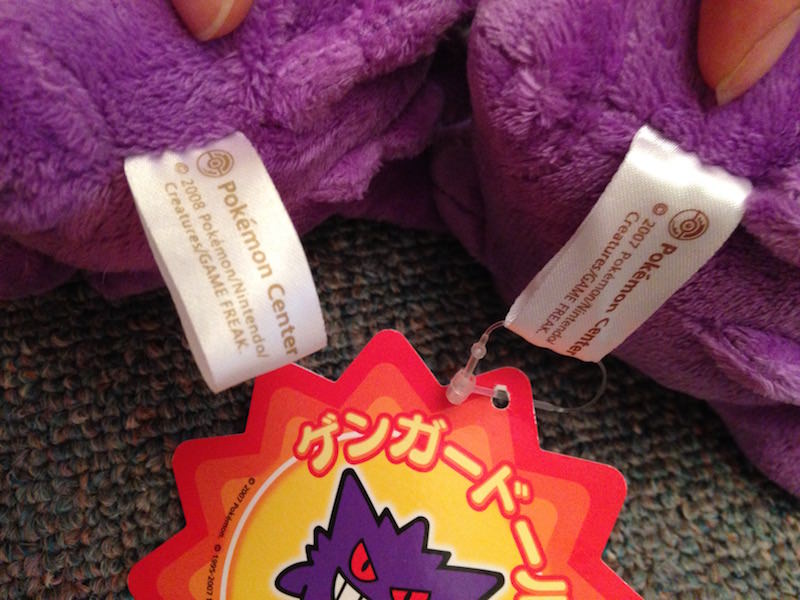 Last is the tush tags! The bootleg has 2008, in slightly faded font, but it matches the legit one. The legit says 2007. I dunno if year of release qualifies though. Also the tush tag is sewn too closely to the seams of the bootleg, as there's a bit of distance between the font of the tag and the sewn spot on the legit.

Well, I hope that helps people who wondered the difference between the legit and fake gengar pokedoll. I've wondered for sometime if there were gonna be any differences at all. 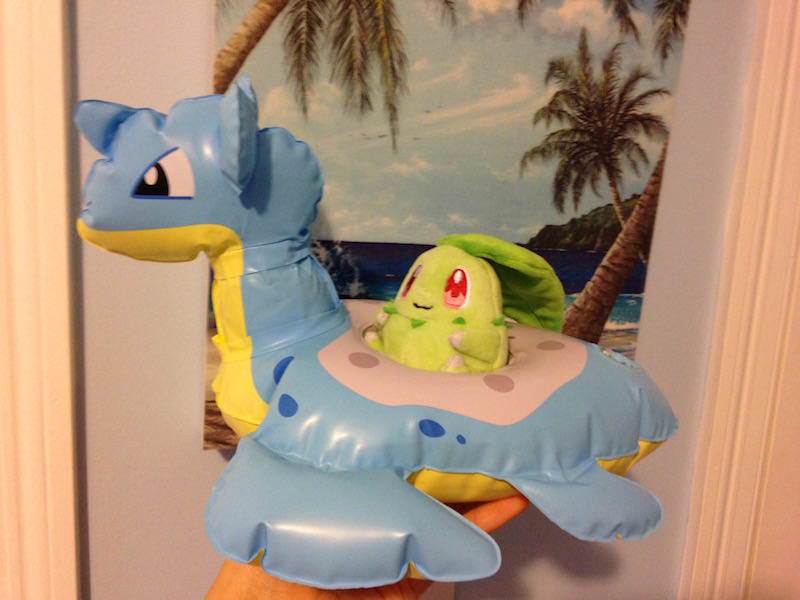 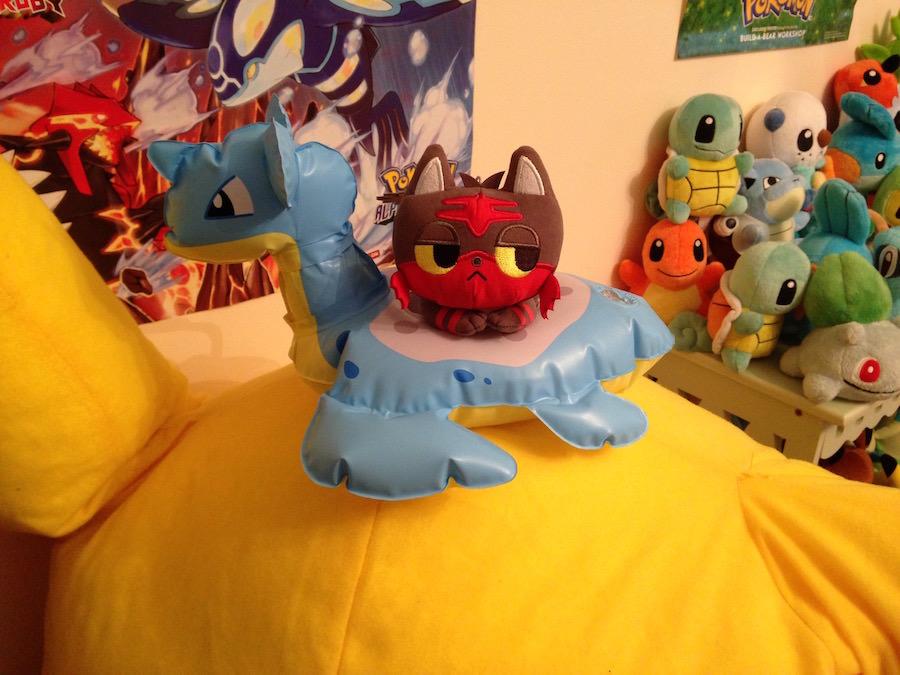 I was gonna take my Litten surfing... but I don't think he cares :P 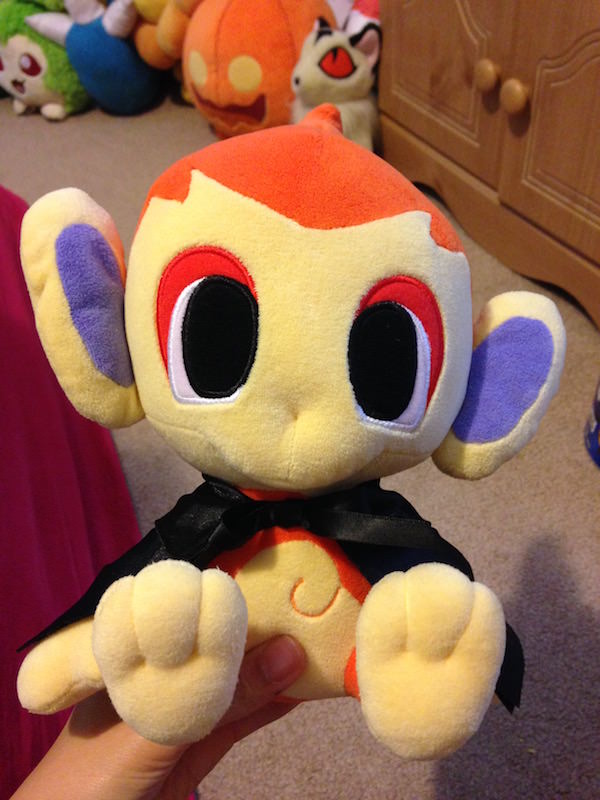 This is one unique plush <33 I really love the purple swapped in favor of the red. 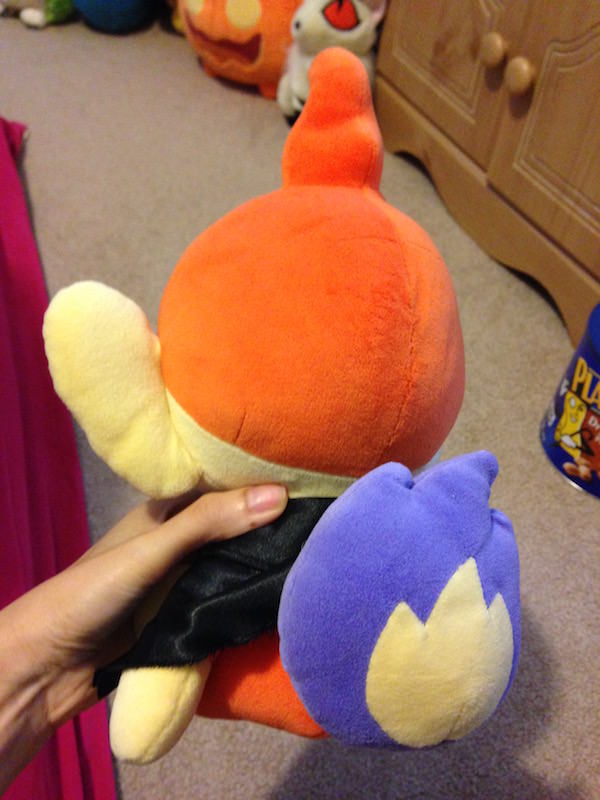 Even the purple flame looks better! <3 Looks like he used to have a tush tag, but it was cut off. Looks like we'll never find out the origins of it.

It would've been epic to see a piplup and turtwig with a halloween color palette swap. 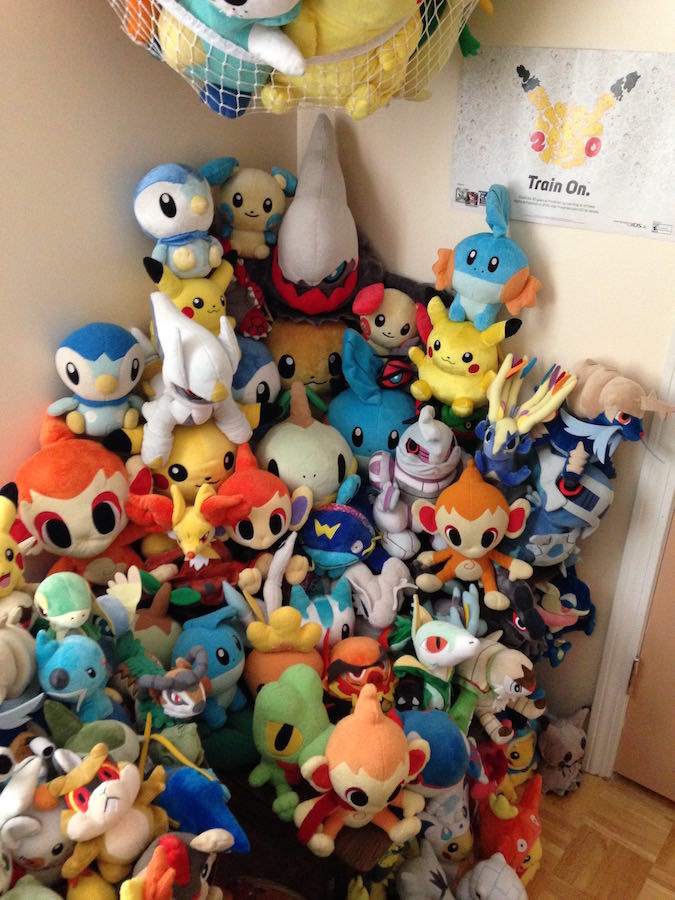 Now he stays with the Oversized Pokedoll Mountain! 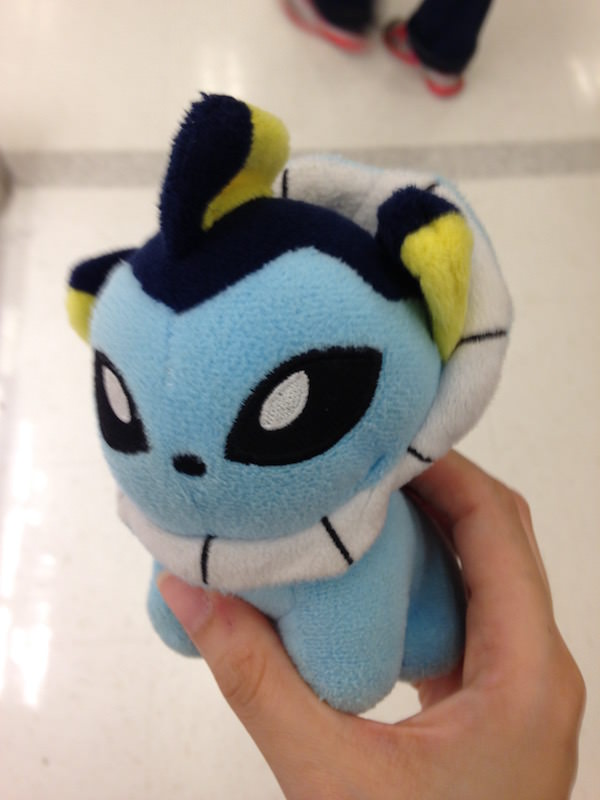 I found this bootleg pokedoll at target. looks like a kid left him behind ;_; He was very loved. 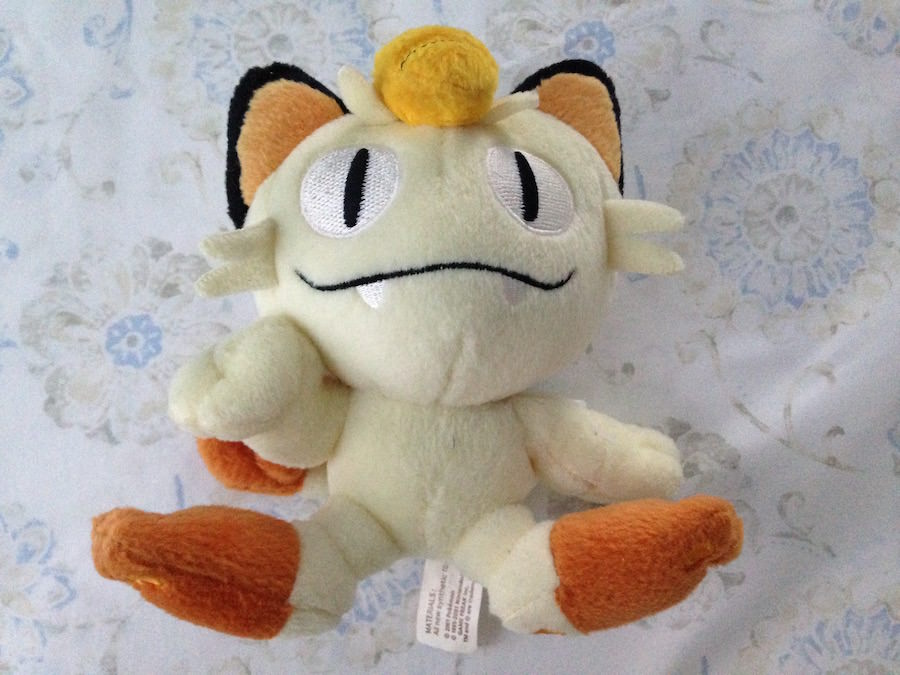 Now for a HUGE grail get... THE MEOWTH POKEDOLL <3

I never thought that I'd get one at all! I've only seen it in auction once over 7 years ago, and never saw him again. I have the plushplush of him, and I fell in love with his design! He's my 2nd fav pokedoll design. Now he's currently the most expensive pokedoll that I have ever paid for, and I will cherish him forever! Thank you so much 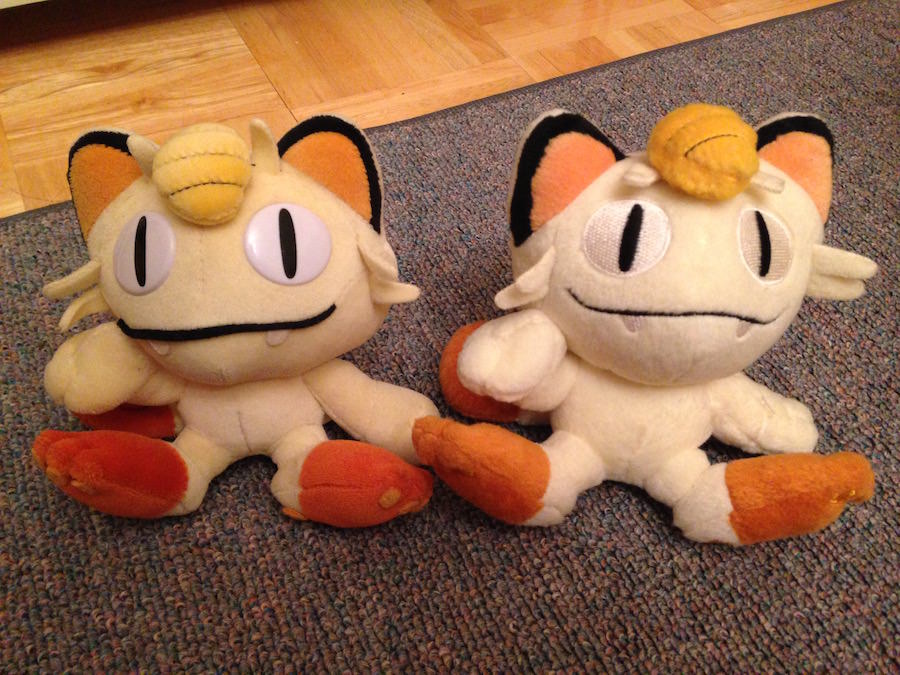 I never thought that I'd see this moment <3 The plushplush is full of charming derp, and his pokedoll is just perf! 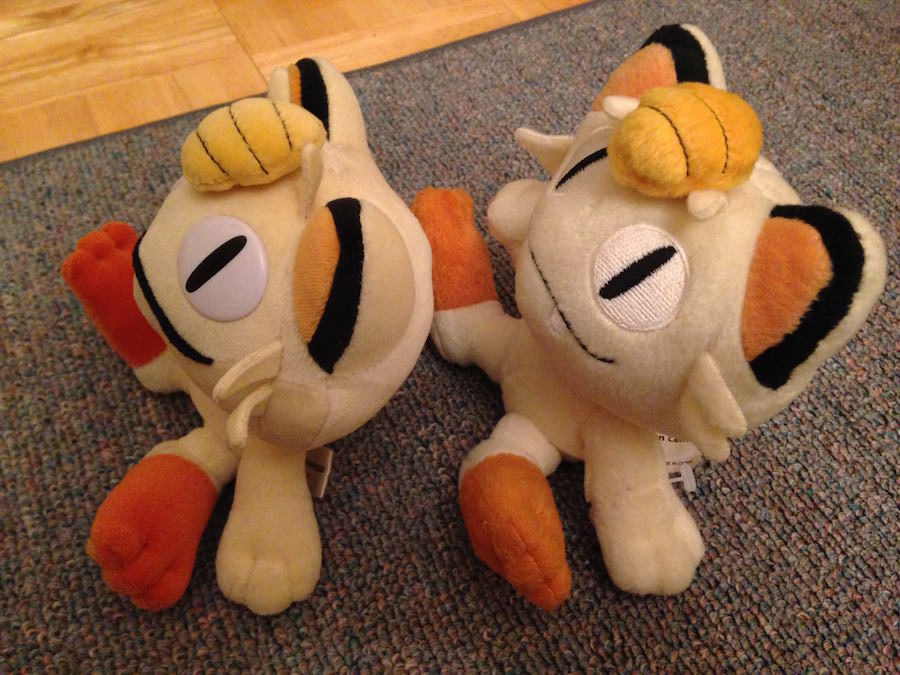 To think that these two wee released around the same year, except the pokedoll was a USA only release, and the plushplush was Japan only. 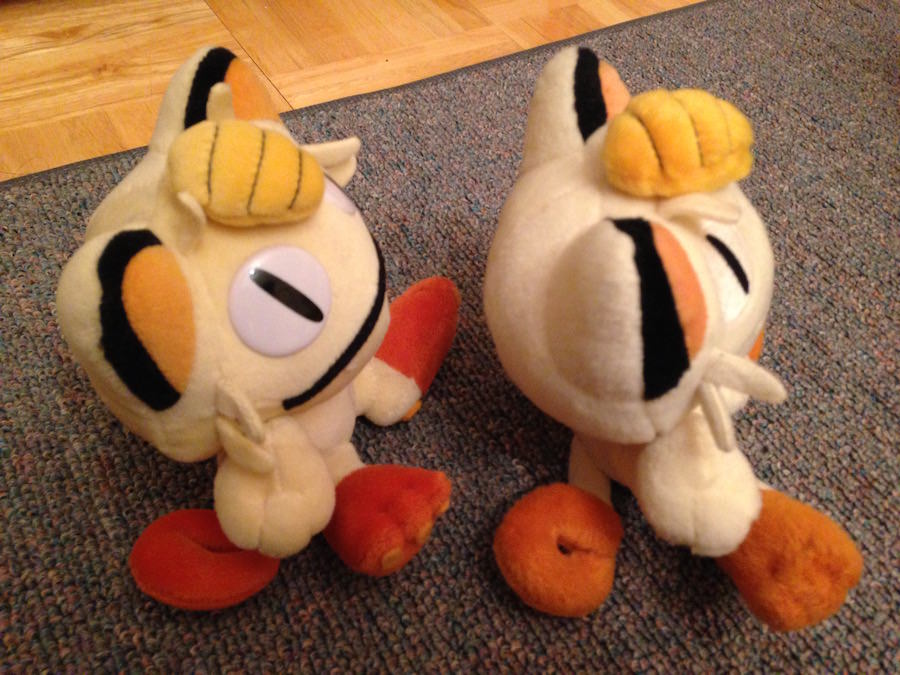 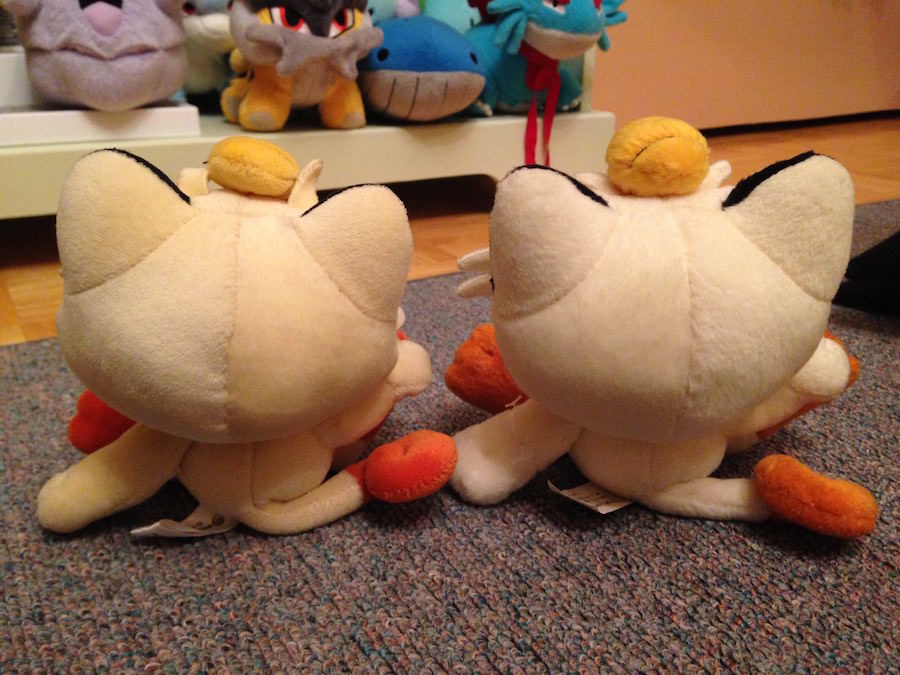 Now because I've obtained this guy, I only have one pokedoll left to get, and that is the highly elusive Clefairy! I've had badluck trying to get her over the years, due to sniping X) haha! She's now the grail! I also have 3 plushplush left to obtain (Gengar, Psyduck, and Cyndaquil), but I'm biding my time. 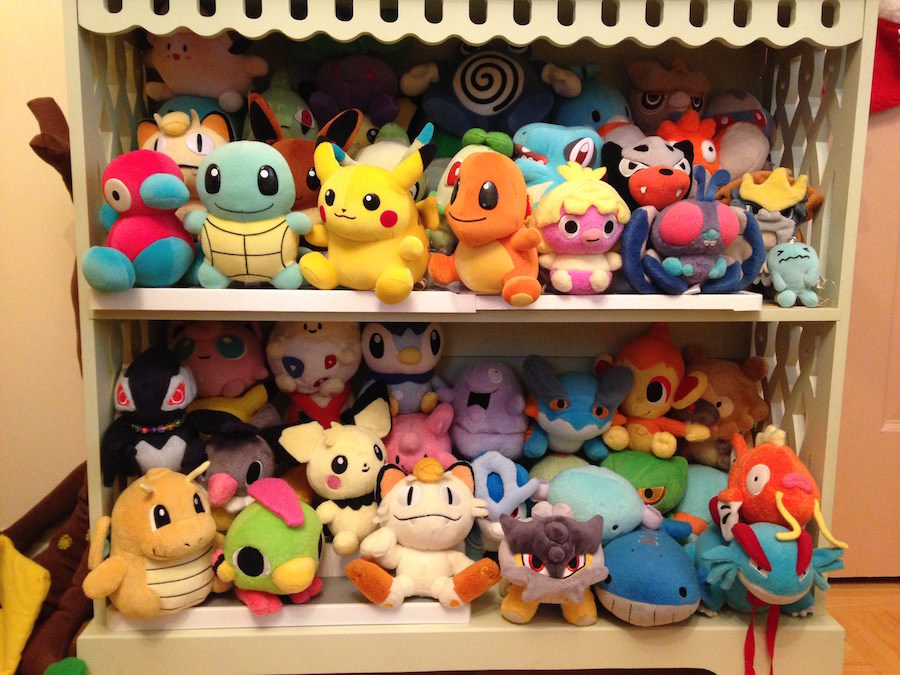 He now has a spot on the bottom shelf after moving them around. Now I can admire them all and fangirl <3 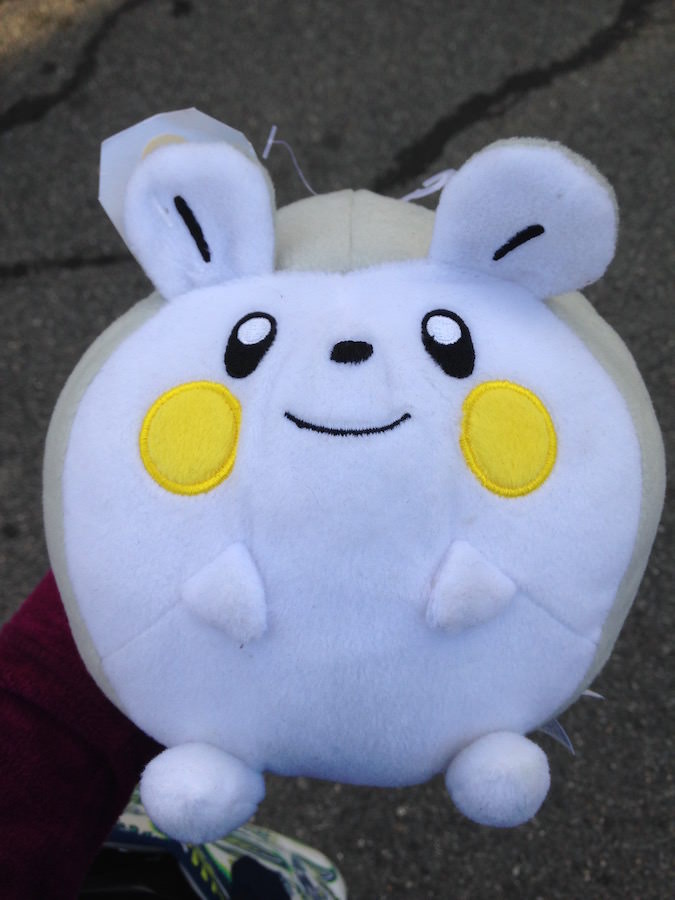 Now time for work gets! Togedemaru was a surprising find from work. She's so round and perf. 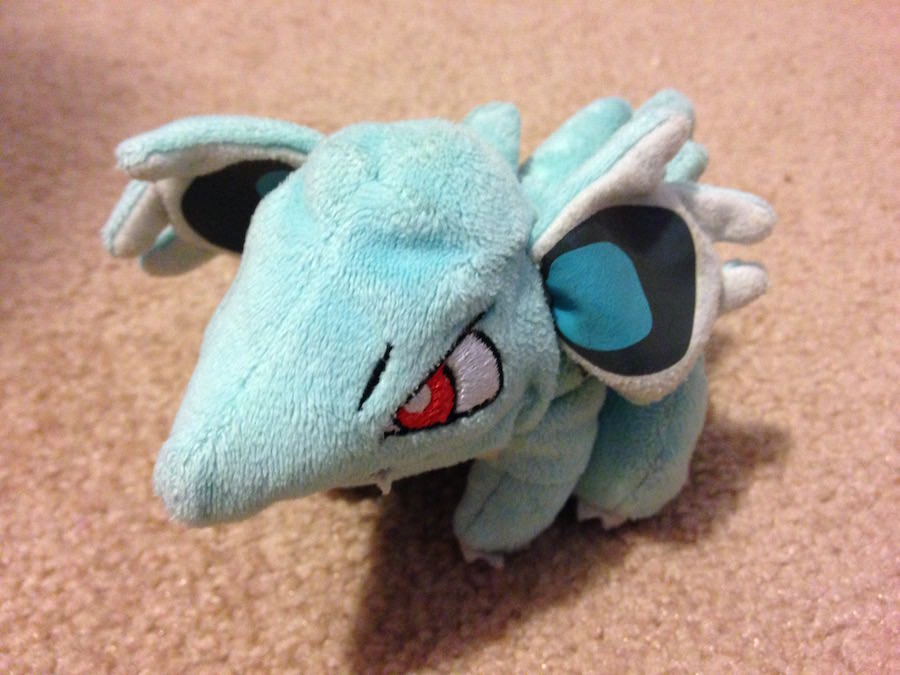 Last, but not least is Nidorina from yesterday.

Well, that concludes this collection update. I wished to add more, but since my comp is still busted, so I've gotta limit my selection. More pics and stuff could be seen on my instagram (@YellowMudkip). Thanks for reading everybody!