I wanted to do an update collection ever since I got my two grails from a few weeks ago, but I've been kind of busy since school is almost over. But since I wanted to take a break from working on school stuff, I decided to make an update post now!

My package from Noppin! :D It was my first time using a deputy service (which I thought I'd never use) and I was surprised how easy it was to use!

They packaged my stuff so well! * v *

When I was looking at all of the Minun plush on PokePlush Project, I nearly flipped out when I saw that Minun! I love Minun a lot and the fact that it had a star on it (I really..really love stars), I JUST HAD TO HAVE IT. But I realized that it was ridiculously rare and never expected to ever see it for sale. ;_; So when I was just casually checking Y!J one day...

There was one that was ending in 14 hours!! And it had its tag!! *___* But I had no idea how to use deputy services so I started to panic, LOL. ;_; Eventually I decided to try out Noppin and was surprised how easy it was to bid! * v *

And then after some more casual browsing of my favorite Pokemon on Y!J, I found a DX Dialga!! MWT!! I couldn't believe it. ;__; The DX Dialga was also another plush I never expected to get a hold of like the Minun, so I didn't want to let either of them go! I used to stare at so many pictures of DX Dialga on Google and wished that I knew about Pokemon plush earlier so I could get some of the old plush. ; v ;

As for the scarf and hat, it was an impulse buy! I never even saw the hat before, but since it had a star pattern on it..I..I just couldn't resist, LOL. * v * I can't believe how big they were because I was just going to put the scarf and hat on my bigger plush, but the scarf is too big!

But my Plusle and Minun hat was kind of in bad condition, like Minun's nose rubbed off completely and half of its mouth rubbed off as well. The yellow part near its blue ear also rubbed off, so I decided to try and fix him myself! 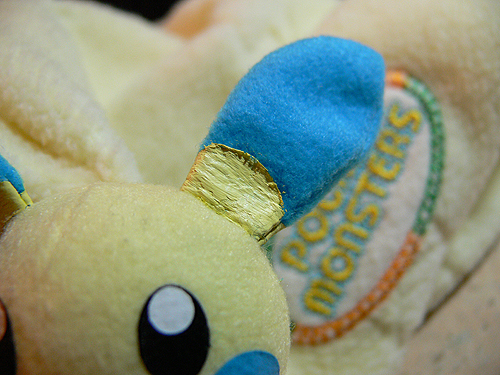 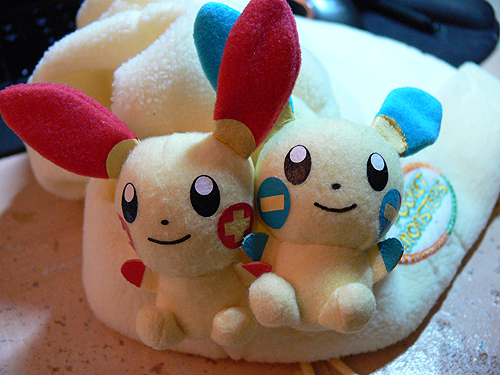 After a little bit of touch ups, the hat is now proudly worn by...

And my minky Jolteon has a new friend! :D

Thank you so much,

And after coming from work last night, I got my pins from

denkimouse! :D Thank you! It was a very pleasant surprise!

And my collection grew quite a bit so I had to move them to new shelves!

I eventually moved them to a new set of wire cube shelves!! I really like arranging things by color, but I have so many blue plush that some of them had to move to my purple cube. And the same goes for my yellow plush. Reshiram is all alone in its white cube...(which belongs to

myntii! The Uxie, Plusle, and Entei belongs to her, too!) And one of the Cinccino belongs to

My collection consist of Pokemon that I've always loved when I played the Pokemon games, but most of them consists of my Pokemon trainer's Pokemon and a bit of

curryryry's. :D So my collection is extremely important to me, because my plush reminds me of our BROTASTICFRIENDSHIP EVEN THOUGH WE'RE SO FAR AWAY~!!! /CHEESY

I also wanted to thank everyone who sold me their stuff to me. ; v ; I love each and every thing that I bought here! And so many people here are so nice! ; w ; I hope I can be more active when school is finally over~.